Seemingly out of nowhere, Microsoft has established itself as one of the major players in the burgeoning fitness wearable and smartwatch categories, with the release of the its newest product: the Microsoft Band.

Currently, smart devices for the wrist fall into one of two categories. There are fitness trackers, such as the Nike+ FuelBand, Jawbone’s UP and Fitbit’s myriad of devices. These sit passively on your wrist, requiring minimal interaction as they quietly log your steps and track your movements and sleep. They sync with an app, letting you know how healthy you’ve been, how lazy you are, and how long you’re really sleeping for when your head hits your pillow.

Then, there are smartwatches. This relatively new group is, in fact, relatively old. Indeed, Microsoft itself pioneered the category with its SPOT technology, which used FM radios to update watches with weather, stock alerts, breaking news, sports updates and even messages from friends on MSN Messenger (remember that?). However, the category has recently picked up steam thanks to Samsung, with its series of Gear watches, Pebble’s e-ink watches, Google’s successful Android Wear devices, and Apple, with its yet-to-be-released Watch. Smartwatches are a hot commodity, and consumers are getting ever more accustomed to seeing notifications and checking the weather on their wrist.

What, then, is Microsoft to do? Its Health and Fitness app is arguably one of the greatest features of Windows 8.1, on both phones and computers, offering guidance in eating habits, exercise and workout tips and even, on compatible devices, logging workouts and tracking steps. It’s a great tool — but Microsoft is far from satisfied with it. Alongside a brand new service called Microsoft Health, the Redmond-based company is throwing itsown wearable into the mix, and it’s one that aims to blend the best parts of a fitness tracker and smartwatch into one device. 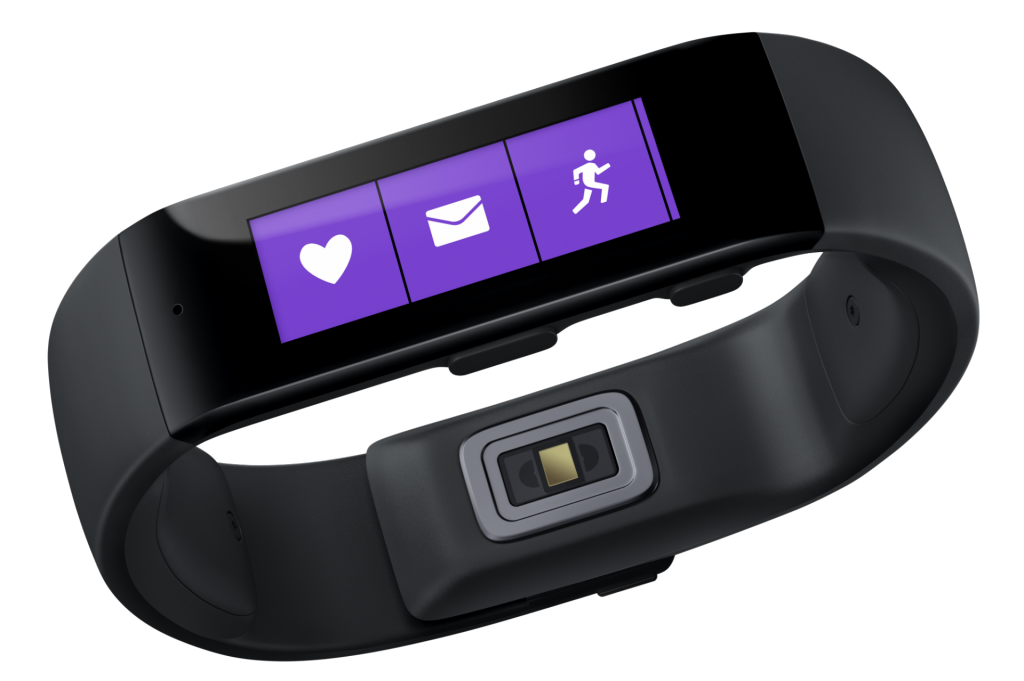 At first glance, there isn’t much to the Band. Indeed, it’s rather uninspiring name is matched with a rather uninspiring design. For a fitness tracker, it’s big — certainly, it won’t melt into the background like Jawbone’s UP, for instance — and though the Surface team apparently helped in its design and construction, there’s little of the gorgeous Surface devices in the Band’s utilitarian look. Indeed, it looks almost like a pre-production device, one that has all of the features but hasn’t been given the final design. It’s not heinous — far from it — but it certainly won’t win any style awards.

Of course, beauty is only skin deep, and it’s what’s inside that counts — and here, Microsoft has created possibly the most feature-rich fitness wearable on the market. Inside the Band’s frame are ten sensors, designed to gather as much information about your body and its activities as possible. On top of sensors to track your steps and motion, there’s a UV sensor to let you know when you’re getting too much sun, GPS to track your run without needing to bring your phone with you (running addicts will love this), a skin temperature sensor to know when you’re too hot or too cold, galvanic skin response sensor to know how much you’re sweating, and an always-on heart rate sensor which tracks your heartbeat 24-hours a day, every day — unless you shower or go for a swim, as the Band sadly lacks water-proofing. (It’s merely water-resistant.) Also, you’ll need to charge it every two days, according to Microsoft — which is worse than some fitness trackers, but better than almost every other smartwatch out there.

When Microsoft says it wants to help you live healthier, it’s no joke. The band is constantly tracking your movements, core functions and your exterior temperature to know how effective that workout was or how deeply you’re sleeping. That always-on heart rate sensor unlocks even deeper insights into your run, or your gym session, or the length of time you’ve been sitting at your desk — and it also helps make the Band one of the most accurate for tracking and estimating the quality of your sleep at night.

That’s before you get the Band’s biggest feature: its screen. It sounds like a small thing, but Microsoft is looking to eliminate the need for your phone to check most of the basics facts. With a press of a button, you can view your total steps for the day, your heart rate, your calories burned and your distance travelled while running. What’s more, Microsoft has baked in a Tile interface inspired by its Windows Phone software which grants the Band smartwatch-like functionality. You’ll find your messages, emails, calendar, weather, timer and alarm, incoming calls, stock trackers, Facebook and Twitter integration, Starbucks card integration (the band currently comes with a $5 giftcard to Starbucks) and of course a watch mode, which keeps the display on, albeit dimmed, to ensure the time is always glanceable. 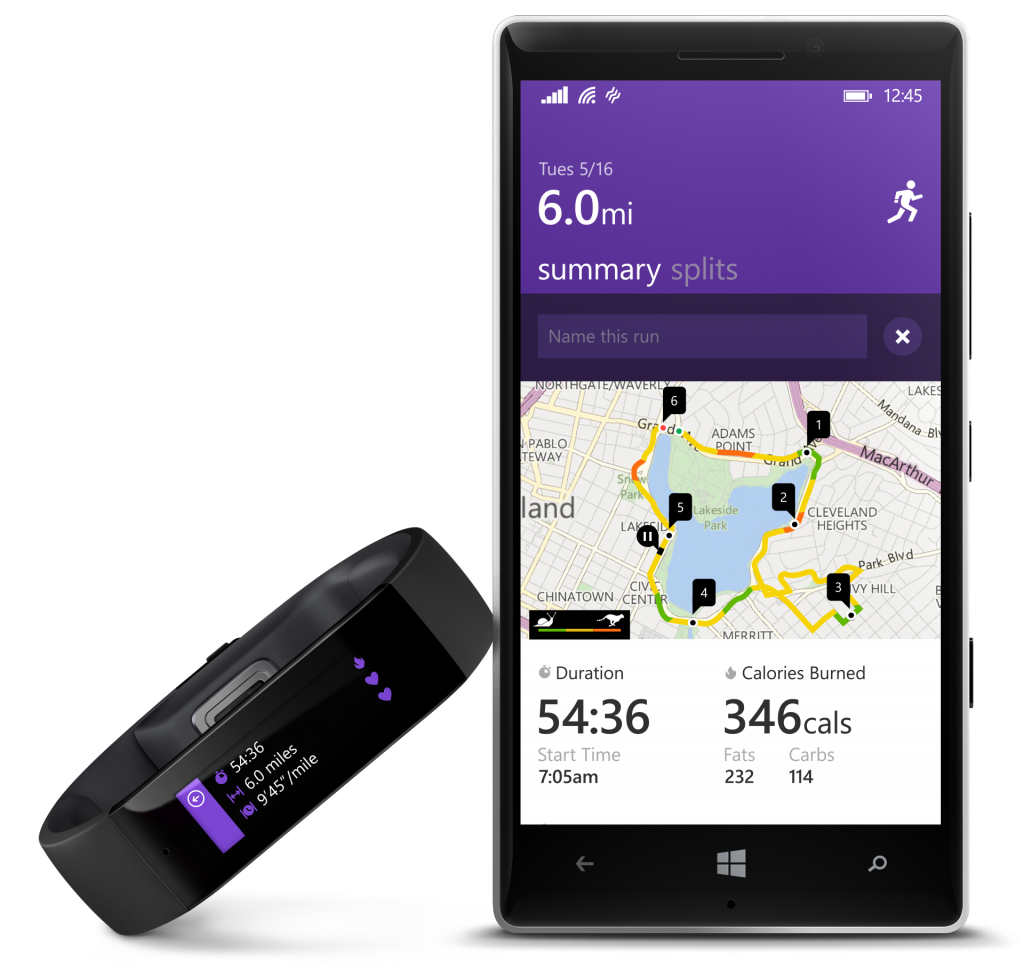 If you have a Windows Phone running 8.1, things get even better, as the Band supports Cortana, the platform’s voice assistant. Hold down the action button on the band — there are two, one for actions, the other for power and display, though you can also use touch to scroll and swipe around the screen — and she’ll spring into life. Here, you can access most of her functions, such as travel reminders, weather updates, basic searches, voice notes, calendar reminders and, of course, access her myriad witty and snarky responses to inane questions such as “Do you love me?” (She’ll crush your dreams by responding “I’ll need quite a few upgrades before I can give you a heartfelt answer.”)

Of course, if you don’t have a Windows Phone, you’re still in luck. The Band, and Microsoft’s Health app, fully supports Android devices running 4.2 and up, and iOS devices running 7.1 and up. With Microsoft Health, and the new features it brings, the company that gave the world Windows is looking to become one of the biggest players in health and fitness. Much like similar apps for other fitness trackers, Health will become your hub for everything related to your Band and the things it tracks. You’ll find your daily totals, your progress goals and the options to customize and re-configure the Band — which includes personalized colors and wallpapers and the option to move tiles around.

It’s also where you’ll find one of the Band’s biggest selling points. Microsoft has teamed up with Gold’s Gym, Shape and Men’s Fitness, among others, to offer personalized workout plans. Search for your desired workout, such as Fat Blaster or 6 Week Summer Body, and download it to Health, where it will sync with your Band. Then, when you’re ready to start your workout, tap the appropriate tile and the Band will guide you through each step of the workout, including rest periods, tracking everything as you go. Need help figuring out a move? The Health app has photos and videos to show you exactly how it should be performed. 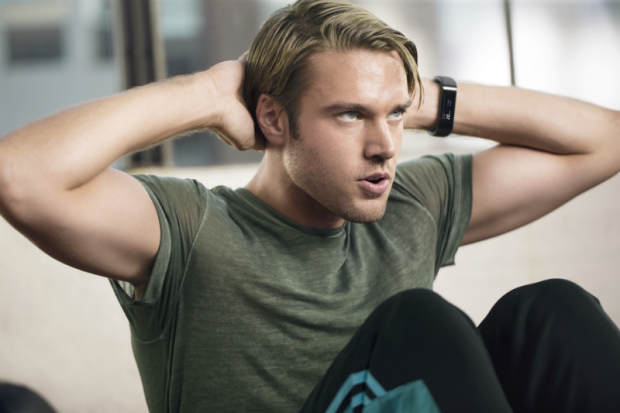 What’s more, Microsoft has opened up the API for the app to sync with other systems, such as myfitnesspal and RunKeeper, and the Health app will only get smarter over time as you continue to wear the Band and log your data. It will soon offer the ability to sync your data with your medical provider, and thanks to Microsoft’s intelligence engine powering the service, it’ll learn when you’re most likely to be working out and what could be affecting your fitness and health. “Over time, you will have the choice to combine your fitness data with calendar and email information from Office as well as location-based information and more,” Microsoft noted in an announcement. “As you make more data available, the Intelligence Engine will get smarter and provide more powerful insights.” That includes fitness performance relative to your workout schedule, whether having breakfast has helped in your morning run, or whether the number of meetings you had yesterday had an impact on the quality of your street. Furthermore, Microsoft is licensing its software and hardware to other companies, meaning we could see trackers and devices which plug into Microsoft’s Health without requiring the use of a Band.

For now, however, you’ll need to decide if the Band is right for you, as it’s currently the only currently available option. At $200, it’s $70 more than a Jawbone UP, and $50 more than Samsung’s Gear Fit, which offers a similar mix of screen and fitness tracking only with fewer sensors and a less robust companion app. For those dedicated to keeping fit and working out, there’s certainly some compelling features. GPS tracking alone should ensure sales from many dedicated runners, while the personal trainer style features of the bands downloadable workouts help limit the barrier to entry for fitness beginners. Of course, if you really want one, your biggest challenge may be finding one. The Band wass listed as sold out as of press time Tuesday, and is only available in Microsoft’s retail stores, where long lines have been reported as eager shoppers look to try out the band for themselves. Ultimately, the Band looks to be one of the most complete fitness trackers on the market, and it even throws in smartwatch functionality to an already enticing package. If you’re the sort who needs to track every detail of their health and fitness, Microsoft may just have released one of the best products on the market.