Review: “The Way He Looks”

The Way He Looks is a sweet, heartfelt, delicately-acted portrayal of teenage angst 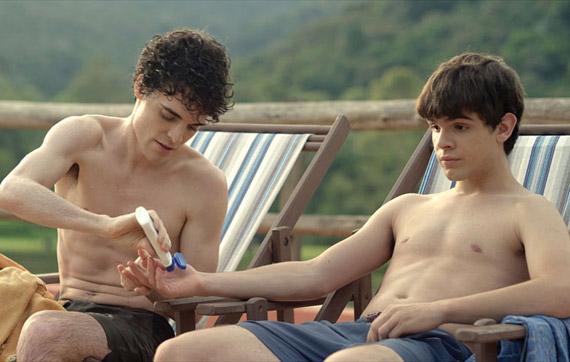 The Way He Looks

There’s something inherently wonderful about The Way He Looks, the feature debut from Brazilian writer-director Daniel Ribeiro (in Portugese with English subtitles). What should be yet another coming-of-age tale about a teenager exploring his sexuality manages to utilize its various, unique strengths to become so much more than that. It’s a sweet, heartfelt, delicately-acted portrayal of the teenage angst for independence, emotional connection and the desire to find one’s true self.

There are two things that set The Way He Looks apart from its numerous genre contemporaries. The first is that it’s set and filmed in Sao Paulo, Brazil. Ribeiro and cinematographer Pierre de Kerchove imbue the city with a dreamy quality — sunlight and shadows blend together, while at night the city assumes an orange glow. Everything looks warm and inviting, which only serves to pull the audience deeper into the film’s world.

The film’s second standout feature is the central conceit of its main character, Leonardo (Ghilherme Lobo) — he is blind. Far from screaming that fact, we are subtly introduced to it, the film opening on Leonardo and his best friend Giovana (Tess Amorim), as they laze beside a pool. As Giovana slips, silently, beneath the surface of the water, Leonardo becomes aware that she isn’t responding and worries at the lack of her voice. From that moment on, Leonardo’s visual impairment is established.

That Leonardo is disabled never halts the film’s progress. As far as both the audience and Leonardo are concerned, he is just a normal teenager, with all of the troubles that usually befall us in youth — desperate for more independence from his overbearing mother, longing to feel his first kiss, and navigating the troubles of high school with his friend. It’s what his disability means to his experiences as a teenager that guides the story along its course.

Everything changes with the introduction of Gabriel (Fabio Audi), a new transfer to the high school. Leonardo and Giovana welcome him into their friendship, which sets into motion the wheels of Leonardo’s personal sexual awakening. It helps that the three leads share an undeniable chemistry, with pitch-perfect performances from the trio.

Lobo captures a teenager desperate to be normal but treated as anything but such by his family, friends and the classmates who seek to bully and tease him. Amorim is the best friend, who dotes on and is devoted to Leo, but who cannot be seen — literally or metaphorically — by him as more than just a friend. Audi is perfect as the charming Gabriel, whose friendship with Leonardo sparks and ignites into a slow-burning passion, which builds over the film’s duration.

Indeed, Leonardo’s lack of sight is a key component to the build-up in his relationship with Gabriel. Lobo himself is sighted, but his ability to portray someone who has never seen the world around him is startlingly well-researched and acted. As he and Gabriel spend time together, he focuses on the sounds, the smells, the touches of the relationship — clasping Gabriel’s arm as they walk home, smelling a sweater left at his house, listening to the sounds of his voice. On the other hand, Gabriel is free to admire Leonardo, knowing he cannot be detected — something handled wonderfully during a shower scene on a school camping trip. Leonardo showers beside Gabriel, unaware that the latter is gazing longingly at his naked body. The two exist together, each clearly desiring the other, but neither sure if the other feels the same way. Leonardo cannot see Gabriel’s reactions to him, and that lack of clarification is what drives the uncertainty of their emotions towards one another.

Of course, you’ll likely be able to call the ending to the film long before it finally arrives. There’s little here that is truly original, with many moments that you’ll have encountered before in other such films — an awkward first dance together (as Gabriel introduces Leonardo to his music), rubbing sun cream on one another, working on a school assignment together which ultimately brings them closer together, and so on. There’s even a foil to Leonardo’s feelings for Gabriel, as the latter piques the interest of a female student, Karina.

And then, there’s the friendship between Giovana and Leonardo, which of course suffers as the former feels squeezed out as the wedge of Gabriel is driven between them. The chemistry between Lobo and Amorim is just as vibrant as it is between Lobo and Audi, as two friends come to terms with their feelings — or lack thereof — for one another, but again this is similar fare to what we’ve seen in other coming-of-age tales. The difference here is how well-crafted Ribeiro’s film is.

one scene, Leonardo and Gabriel sneak off to enjoy a lunar eclipse. Leonardo can’t see it, but goes to spend more time with Gabriel. As they sit, together, he asks Gabriel to explain what an eclipse is. Unable to find words to convey the effect, he clasps Leonardo’s hands and moves stones between them, acting out the movements of the celestial bodies. The eclipse ultimately becomes a metaphor for the central trio’s relationship — Gabriel moving between Leonardo and Giovana — and it’s fitting that something so visceral, which Leonardo has never experienced before and can’t even imagine, ultimately describes the effect that Gabriel has on his life and his sexuality.

From its wonderful cast to its gorgeous setting and tight direction, The Way He Looks is a labor of love. Based on a short film from 2010, Ribeiro has extrapolated the core theme of that short into a feature length film that can justify its running time. Leonardo’s desperate need to feel independent and confident in himself, combined with his growing feelings for Gabriel — and the ultimate reciprocation of those feelings — will leave you on a giddy high. When they pair finally share a kiss, as Leonardo’s self-confessed dark world gets a little brighter, you’ll be hard-pressed to not leave the cinema smiling.

The Way He Looks (