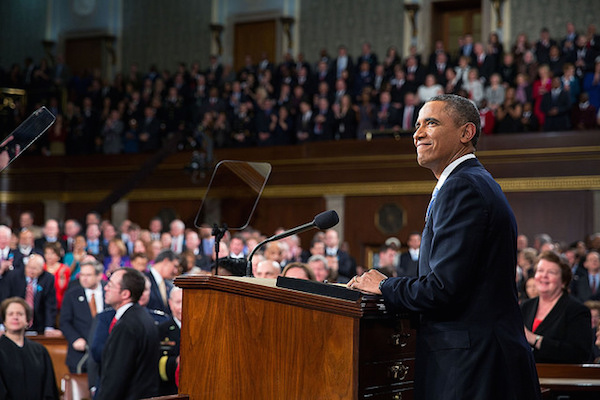 Speaking to a national audience Tuesday night, President Barack Obama described same-sex couples’ right to marry as a “civil right” during his annual State of the Union address.

“I’ve seen something like gay marriage go from a wedge issue used to drive us apart to a story of freedom across our country, a civil right now legal in states that seven in ten Americans call home,” Obama said to a standing ovation from the Democratic side of the chamber.

Obama’s declaration that marriage equality is a civil right, and presumably one that same-sex couples nationwide are guaranteed, marks one of Obama’s most forceful statements on the issue to date and comes at a time when same-sex marriage is once again the focus of national attention.

Sitting in the front row were Chief Justice John Roberts and Justices Anthony Kennedy, Ruth Bader Ginsburg, Stephen Breyer, Sonia Sotomayor and Elena Kagan. The court’s more conservative members — Justices Samuel Alito, Antonin Scalia and Clarence Thomas — did not attend the speech. Kennedy is the author of three of the Supreme Court’s most important gay rights opinions, the latest being the 2013 Windsor decision, which struck down the federal government’s definition of marriage as between a man and a woman. Although considered a member of the court’s conservative wing, some have speculated whether Roberts could be convinced to rule in favor of marriage equality.

“What was striking to me was to stand up to applaud his comments,” said out Rep. Mark Takano (D-Calif.). “I swelled up with pride when he mentioned marriage equality and the momentum it had across the country, but looked at the Republican side of the chamber and the stoney, arms-crossed attitude was — I can’t say I was surprised. Let me just say I was disappointed that they’re clinging to this as a wedge issue.”

Sen. Rob Portman (Ohio), one of four Senate Republicans to openly support marriage equality, told reporters he agreed with Obama’s remarks on the issue. Portman has said he believes same-sex marriage should be left up to the states, and when asked if he supports same-sex marriage litigation before the Supreme Court, responded, “I support the democratic process working, and I think it is working.”

Obama’s declaration that marriage equality is a civil right comes after his outgoing attorney general, Eric Holder, reaffirmed last week that the Justice Department would file a brief urging the Supreme Court “to make marriage equality a reality for all Americans.” The Supreme Court is expected to hear arguments in April with a decision handed down in June. More than 70 percent of Americans live in one of the 36 states, plus D.C., that permit same-sex marriage.

Obama also made history as the first president to spell out bisexual and transgender in LGBT during a State of the Union address. “As Americans, we respect human dignity, even when we’re threatened,” Obama said. “That’s why we defend free speech, and advocate for political prisoners, and condemn the persecution of women, or religious minorities, or people who are lesbian, gay, bisexual, or transgender. We do these things not only because they’re right, but because they make us safer.”

On and off of Capitol Hill, LGBT advocates were enthusiastic in their praise of Obama’s speech, which comes as two years remain in his presidency.

Sen. Jeff Merkley (D-Oreg.), who has vowed to introduce a comprehensive LGBT civil rights bill this Congress, praised Obama’s remarks. “I’m very pleased that he brought the discussion about equality and opportunity right into the heart of the American living room tonight to say that this is the right thing for our nation, it’s the right thing for individuals and for our vision of fairness,” Merkley told Metro Weekly. Merkley said he hopes the comprehensive LGBT nondiscrimination bill will be introduced by April or May.

Although Mara Keisling, executive director of Transgender Equality, said the Obama administration’s advancement of policies that have improved the lives of transgender people in years without a mention in the State of the Union are far more important, Obama’s remarks are heartening. “But make no mistake, the President of the United States condemning persecution against transgender people is pivotal. It will empower trans people to stand taller and work harder to improve this country for all people,” Keisling said in a statement.

“The president acknowledges marriage as a civil right to a standing ovation from members of Congress,” Fred Sainz, vice president of the Human Rights Campaign, said in an email. “And for the first time in a State of the Union speech, he refers to our bisexual and transgender brothers and sisters. It should not go unnoticed that he also lends his voice to supporting LGBT people across the world struggling against tyranny and oppression.”