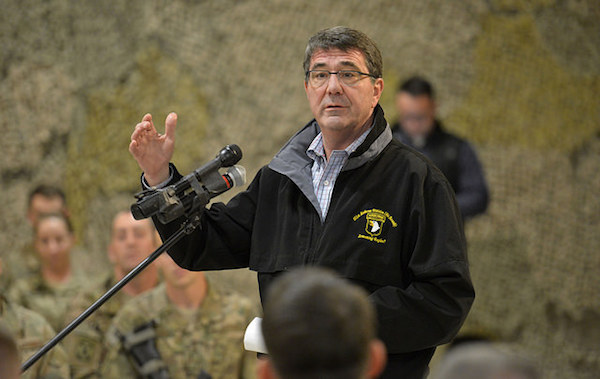 Secretary of Defense Ashton Carter expressed his openness Sunday to allowing transgender Americans to serve in the military, marking the first time the newly sworn-in defense secretary has addressed the issue of transgender service.

During remarks to troops in Kandahar, Afghanistan, Carter was asked his thoughts about transgender Americans serving in an “austere environment” like Kandahar and said he approaches the issue of transgender service from a fundamental starting point.

“It’s not something I’ve studied a lot since I became secretary of defense. But I come at this kind of question from a fundamental starting point, which is that we want to make our conditions and experience of service as attractive as possible to our best people in our country,” Carter said. “And I’m very open-minded about — otherwise about what their personal lives and proclivities are, provided they can do what we need them to do for us. That’s the important criteria. Are they going to be excellent service members? And I don’t think anything but their suitability for service should preclude them.”

Carter’s remarks come less than a week into his tenure as defense secretary. Carter, who formerly served as deputy secretary of defense, was nominated by President Barack Obama to replace outgoing Defense Secretary Chuck Hagel in December and confirmed by the Senate 95-5 earlier this month. Although Hagel, a Vietnam veteran and the first former enlisted combat soldier to serve as defense secretary, voiced his support for a review of the military’s longstanding ban on open transgender service — a review the White House also signaled their support for — Hagel never ordered such a review before departing the Pentagon.

Carter was asked the question about transgender military service by Navy Lt. Cmdr. Jesse M. Ehrenfeld, a physician who also runs the program for LGBTI health at Vanderbilt University Medical Center. Ehrenfeld told Metro Weekly he has cared for transgender patients, including a transgender servicemember during this deployment.

“As you know, the current military restrictions force transgender servicemembers to hide who they really are. This can cause undue stress and can prevent them from getting the care they need, and ultimately serving to their fullest capacity,” Ehrenfeld said in an email. “During his visit, I was delighted to be able to ask Secretary Carter his opinion on the matter. I agree wholeheartedly with what he said – which is that we ought to pursue any opportunity we have to remove discrimination. It’s clear to me, that removing the prohibition against transgender service would be a step in that direction.”

With Hagel gone, focus has now turned to Carter to order a review of the medical regulatory ban that prohibits transgender service. An estimated 15,500 transgender personnel currently serve in the armed forces.

Carter’s comments Sunday have provided many advocates with hope that action will at last be taken on the military’s transgender ban.

“We urge Secretary Carter to put action to his comments by ordering an immediate review of the outdated regulations that prevent transgender service members from serving our nation openly and honestly,” said HRC Government Affairs Director David Stacy in a statement. “As Secretary Carter pointed out, all that should matter is the ability to do the job. Our nation’s transgender service members bravely and heroically serve our nation, and they certainly deserve to be able to be honest about who they are.”

“Secretary Carter is right – being transgender should not exclude anyone from serving in America’s military,” added Allyson Robinson, a former Army captain and director of policy for SPARTA. “Transgender Americans are serving today with honor and distinction, but must serve in silence and forgo medically necessary care to do so. There is no reason for this to continue. Secretary Carter must lead the way by ordering a top-down, department level review of the regulations.”

“Secretary Carter is right in that their ability to serve is the only thing that should matter,” said American Military Partner Association President Ashley Broadway-Mack in a statement. “Thousands of transgender service members ARE currently doing the job, and doing it well, but are forced to do so in silence – forced to lie about something as fundamental as who they are in order to continue to serve. While we applaud Secretary Carter for being ‘open-minded’ on this issue, we urge him to take action that will lead to ending this ban that continues to harm our transgender service members and their families.”