Shorts Person: An interview with Jon Gann of DC Shorts

Jon Gann didn’t set out to become the go-to guy for filmmaking in D.C. In the late 1990s, the Washington native was looking for a diversion from his design and marketing business, when he saw the early flickers of the emerging digital revolution. He started creating his own digital content, and scored near-instant success: His 2001 short film Cyberslut got picked up by roughly 50 film festivals around the world. The only thing missing? A sense of support.

“I took the year off to travel [the festival circuit] and was very unimpressed by most major film festivals,” Gann says. “They seemed to be about money and sponsors and parties, but they weren’t necessarily about films. And since I made short films, they were definitely not about me or my colleagues.” 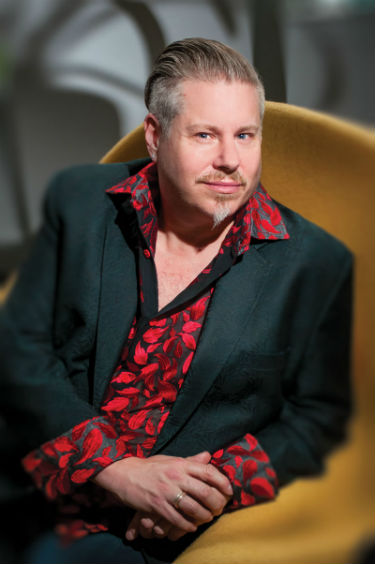 That realization helped Gann find his true calling. “Along the way, I realized that my place in the industry was really in creating opportunities for other people to showcase their work.” He started the DC Shorts Film Festival in 2003 — twelve years later, the annual fall event is the largest of its kind on the East Coast, screening over 130 films in 11 days. But the festival has also become the most prominent part of a broader entity, launched in 2006 as the DC Film Alliance. Now known simply as DC Shorts, the organization aims to be a resource for area filmmakers, as well as a presenter of film programs offered throughout the year.

Gann, who has written a couple of books about film festivals and filmmaking, also signed on last year to help turn around floundering local film organization CINE. Originally started by the U.S. State Department to help promote and advance American documentaries overseas, the organization primarily honors excellence in “media making” through its Golden Eagle Awards. Says Gann: “They brought me in to kind of bring a new perspective to it.”

METRO WEEKLY: Let’s start with the timeliest topic at the moment, the 2015 Academy Awards. Do you have a favorite film among this year’s Best Picture nominees?

JON GANN: I’d love to see Birdman win. I think it’s a brilliant film. I think they’re going to go with Boyhood. But who knows? It’s anyone’s call. It could be The Grand Budapest Hotel that wins. It’s actually the first year in a long time where there’s not a bad one in the bunch.

MW: What else are you looking forward to at this year’s Oscars?

JON GANN: I’m always fascinated by the shorts. That’s five minutes of TV time that I know most people are going to refill their nachos or take a break, but to me that’s the most exciting part of the evening. I’ve seen all of the films. I don’t necessarily have a favorite. In the past DC Shorts has shown a few films that have gone on to win or to be nominated, so that’s always exciting. The Academy is looking for very different types of films than we’re looking for, though.

MW: Could you elaborate?

GANN: Well, I think people in D.C. have a slightly different sensibility than elsewhere. And sometimes there are films that just don’t play well, or films that we don’t do well programming. I find that when we show highly political films, the audience doesn’t care for them, because it’s day work.

GANN: It is counter-intuitive. When we have shown highly charged political films, those are the films we get the most backlash about.

MW: DC Shorts always and only shows short films, often under 20 minutes in length. What would you say is the appeal of shorts? They’re not just stepping stones or calling cards for aspiring full-length filmmakers, right?

GANN: No. A lot of the shorts we get are made because people love that format. It’s just like a short story — it’s a format onto its own. Not every film needs to be 90 minutes. I’m sure everyone’s sat through features for two hours thinking, “My god, there’s 10-minutes worth of story in this thing and the rest of it is BS.” Why not just get to the meat of the matter?

MW: And the appeal must be even stronger now in this era of short-attention spans and hyper-connectivity.

GANN: It’s interesting: As the Internet has gotten faster and technology has gotten better, more and more people watch stuff online, which I think has really helped short film. I think it’s made for more creative films, and more opportunities for people to have their work seen.

It’s also kind of democratized it, to the point that everyone who has a cellphone camera and a piece of editing software thinks that they can be a filmmaker — which is not the case. Because filmmaking is a visual way of telling a story, and if you aren’t a storyteller inherently, then you’re not going to succeed at it.

MW: Do you seek out films of LGBT interest to screen at DC Shorts?

GANN: We show films of every genre and ilk. We purposely try to show as many LGBT films as we can that fit within the rest of our programming, partly because, with the exception of Reel Affirmations, there really is no place to see that type of content. I’m not big on the coming-out experience, or the heartache stories. I’m much more about storytelling with LGBT characters. It’s about the human experience, not necessarily about the LGBT experience. I’ve always found that to be much more interesting.

When I started making films — and I did the LGBT circuit with Cyberslut — I was just kind of like, yet another coming out movie? How many more of these could I possibly watch?

They were really dying out, as more important and more interesting stories came to the forefront. Now there are more coming-out stories, because it’s another generation and they want to have their stories told in a very different way. And I think coming out now is a completely different beast than it was 15 years ago.

MW: Did you ever work with Reel Affirmations, or the other film festivals in town?

GANN: We partner with as many film festivals as we can, for promotional purposes. There’s so much content out there. There might be, let’s say, 600 LGBT shorts a year. We might be showing 12. Reel Affirmations might be showing 20. But they’re not going to be the same films. So we want to be able to show as many films to D.C. audiences as possible. I think it’s very rare that we’ve programmed the same stuff that they’ve programmed.

MW: Have you personally ever participated in Reel Affirmations?

GANN: No. I’ll be honest with you. My film before Cyberslut had played at a lot of festivals also. It was not an LGBT film at all. And I took it to Reel Affirmations, and they refused to play it because it didn’t have gay content. There wasn’t a gay story. It was more of an experimental film. I complained that, you know, I’m the only gay filmmaker in Washington, D.C., that could be represented at your festival. And that wasn’t enough for them. So I was like, I don’t really have a lot of hope for you then.

To me, LGBT film festivals should be about the community and not the film itself. I think more and more LGBT festivals are realizing that, especially since the amount of content is shrinking and their audiences are changing. The stories can’t always be about the LGBT experience, just attracting LGBT viewers. I know Reel Affirmations has had some issues recently, and I know that they’re looking to come back, and I hope they do. I think it’s a really important component of our community.

MW: In addition to your work in film, you’ve also dabbled in theater, creating a musical at the Capital Fringe Festival six years ago, Pepe.

GANN: I’ve had a few shows run in the Fringe festival, just kind of like summer shits-and-giggles projects. Pepe: The Mail Order Monkey Musical took a story from local glass artist Tim Tate about a pet monkey he and his brother had ordered through the mail as kids. Originally I wanted to make it into a short film, and then realized the logistical nightmares of monkeys slinging poop. Believe it or not, I thought that was better for the stage. [Laughs.] That’s one of the reasons it ended up as a musical. It was one of these summer fun projects, and it involved a bunch of my friends who are set designers and costume designers and actors and musicians — just a way for everyone to work together for the summer and do something kind of silly. So that was the impetus behind it.

MW: So developing the occasional fringe show is a creative and communal outlet for you?

GANN: Yeah, it’s very much about being a communal art project. I actually have an idea for another musical that I’m going to be working on with some friends for next year. I guess some people get together and play games or watch sports. We get together and devise some kind of crazy art project.

MW: I understand you and your partner, Michael, have been together for two and a half years. Has there been any talk of marriage? Or of having children?

GANN: No, not really. Marriage is not for everyone. And I gave up on having kids when I got to my forties. [Laughs.] I find being an uncle a much more rewarding job.

GANN: [Laughs.] I actually got out of the babysitting part because their parents all want to go out with me.

For more information on DC Shorts, including how to volunteer for the September festival, visit dcshorts.com.