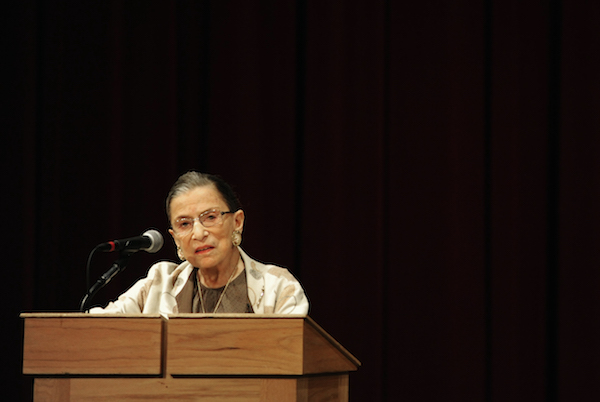 “I think it’s doubtful that it wouldn’t be accepted,” Ginsburg said Wednesday of a nationwide marriage equality ruling, pointing to the shift in public opinion toward gay people.

“The change in people’s attitudes on that issue has been enormous,” the 81-year-old Ginsburg continued. “In recent years, people have said, ‘This is the way I am.’ And others looked around, and we discovered it’s our next-door neighbor — we’re very fond of them. Or it’s our child’s best friend, or even our child. I think that as more and more people came out and said that ‘this is who I am,’ the rest of us recognized that they are one of us.”

Ginsburg’s remarks appear to reinforce the views of many court observers that the Supreme Court is ready to rule in favor of marriage equality, a view most recently expressed by President Barack Obama.

“My sense is that the Supreme Court is about to make a shift, one that I welcome, which is to recognize that — having hit a critical mass of states that have recognized same-sex marriage — it doesn’t make sense for us to now have this patchwork system and that it’s time to recognize that, under the equal protection clause of the United States, same-sex couples should have the same rights as anybody else,” Obama said earlier this week during an interview with BuzzFeed News.

“I think that as more and more people came out and said that ‘this is who I am,’ the rest of us recognized that they are one of us.”

But while Ginsburg believes most Americans would accept a sweeping ruling legalizing same-sex marriage, this week has left little doubt others would be less welcoming. Led by Alabama Chief Justice Roy Moore, judges in more than half of Alabama’s 67 counties have defied a federal court order and refused to issue marriage licenses to same-sex couples. On Monday, the Supreme Court declined to extend the stay of a U.S. district court’s ruling overturning the state’s same-sex marriage ban. Moore threatened probate judges who did issue marriage license that they would be “acting in violation of their oaths to uphold the Alabama Constitution if they issued marriage licenses prohibited under Alabama law.”

Moore, who has admitted state courts would be bound by a nationwide marriage equality ruling from the Supreme Court, has been compared to George Wallace, the Alabama governor who defied a federal order to desegregate Alabama schools in the 1960s.

“It’s a shame and a disgrace what is happening in Alabama today, my native state,” Rep. John Lewis (D-Ga.), a veteran of the Civil Rights Movement, said Tuesday on The Diane Rehm Show. “It’s almost like Wallace standing in the schoolhouse door. You cannot have equality and justice for some and not for all under the 14th Amendment to the Constitution. It’s not right, it’s not fair and it’s not just.”

Lewis said he believes the Supreme Court will do “what is right” and Alabama will “become part of the 21st century.”

The Supreme Court is expected to hear arguments on the constitutionality of state bans on same-sex marriage in April, with a ruling handed down in June. In a written dissent, Supreme Court Justice Clarence Thomas wrote the denial of a stay in the Alabama case “may well be seen as a signal of the Court’s intended resolution of that question” of same-sex marriage.

“There was a familiarity with people that didn’t exist in the beginning when the race problem was on the front burner because we lived in segregated communities and it was truly a ‘we, they’ kind of thing,” Ginsburg said Wednesday. “It’s not so, I think, of the gay rights movement. It would not take a lot of adjustment. And of course we shouldn’t speak much more about this subject because one way or another it will be decided before we leave town in June.”