By Justin Snow on February 6, 2015 @JustinCSnow 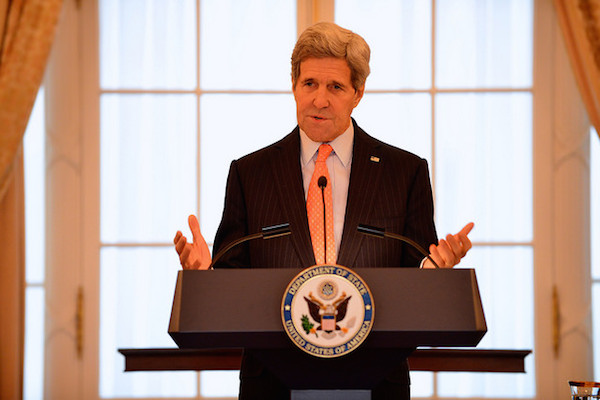 The State Department will make history later this month by naming the first ever American diplomat to advocate for the rights of LGBT people around the globe. A State Department official told Metro Weekly the special envoy on LGBT rights will be named before the end of February and be a current out foreign service officer.

“It’s been long in the making, because the Secretary insisted the envoy be a career Foreign Service officer from inside the institution, someone who is part of the fabric of the institution, a diplomat by training,” the State Department official said.

The move comes after legislation was reintroduced in Congress last week that would create such a role. Sen. Ed Markey (D-Mass.) and Rep. Alan Lowenthal (D-Calif.), who reintroduced the International Human Rights Defense Act on Jan. 29, praised the announcement by the State Department.

“As a nation, we can, and should, take a leading role in defending the rights of all human beings across the globe to live, love, and prosper.”

“I welcome the State Department’s action on my call to make defending LGBT rights a foreign policy priority,” Markey said in a statement. “This special envoy position at the State Department will be a global model for defending LGBT rights around the world. For the United States to hold true to our commitment to defend the human rights of all people around the world, we must stand with the LGBT community in their struggle for recognition and equality everywhere. I look forward to working with Secretary Kerry and the State Department as it affirms our nation’s commitment to equality for all people around the globe.”

“American is a beacon of freedom and equality to the rest of the world. We must lead by example,” added Lowenthal. “The appointment of a LGBT Special Envoy is another step to making sure that our fundamental American ideals of equality, equity, and diversity are properly reflected in our foreign policy. As a nation, we can, and should, take a leading role in defending the rights of all human beings across the globe to live, love, and prosper.”

According to the State Department official, the legislation introduced in Congress is viewed as a “very helpful vote of confidence, but we wouldn’t want to wait for passage to do something we’ve long thought was the right thing to do and which has been in process.”

Last October, 25 senators sent a letter to President Obama urging him to make the appointment “as soon as possible to ensure that it is carried over into the next administration.”

“For the first time in our nation’s history, LGBT people around the world will have a dedicated, full-time senior advocate in the U.S. State Department,” said Chad Griffin, president of the Human Rights Campaign, in a statement. “While there is currently strong momentum in the United States toward equality, there are many places in the world where the LGBT community is at risk, sometimes even for their lives. This is an important way for the United States to facilitate diplomatic conversations with countries where we see ongoing violence, harassment and discrimination of LGBT people.”

According to HRC, same-sex relations are criminalized in 76 countries and punishable by death in 10.

“The announcement that Secretary Kerry will appoint a special envoy is a major milestone in the fight for equality worldwide, sending an important message to foreign governments that protecting the rights of LGBT people will remain a key foreign policy priority of the United States well beyond the current administration,” said Human Rights First’s Shawn Gaylord in a statement.