By Justin Snow on February 9, 2015 @JustinCSnow 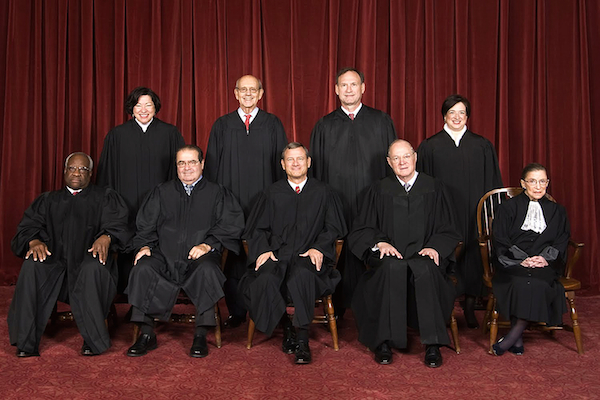 The likelihood the U.S. Supreme Court will rule in favor of marriage equality later this year increased dramatically Monday. Minutes before the stay of a lower court’s ruling striking down Alabama’s ban on same-sex marriage was set to expire automatically, the nation’s highest court weighed in. The court formally declined to extend the hold on same-sex marriages, and at 8 a.m. local time, same-sex couples in courthouses across Alabama began to legally marry. The move came after the 11th Circuit Court of Appeals also denied a request by Alabama Attorney General Luther Strange to extend the stay.

The Supreme Court has allowed same-sex marriages to proceed in a number of states in recent months, including in Florida, which is also in the 11th Circuit and where a federal appeals court has not yet ruled on the issue. But this case was different. The request marked the first time the high court has been asked to grant a stay in a marriage case since announcing last month that the justices will address the constitutionality of state bans on same-sex marriage later this year.

“By refusing to halt marriage licenses in Alabama, the Supreme Court has telegraphed that there is virtually zero risk that they will issue an anti-equality ruling this summer,” said Sarah Warbelow, legal director for the Human Rights Campaign, in a statement. “Instead, the odds of a ruling bringing marriage equality to all 50 states have increased significantly.”

That assessment appeared universal among court observers and was only reinforced by one of the court’s most conservative members. Dissenting from the decision to deny the Alabama stay were Justices Clarence Thomas and Antonin Scalia. Both men, considered two of the most conservative members of the court, have dissented in a number of stay requests that have been denied by their colleagues. On Monday, however, Thomas went further and expounded upon why if it had been up to him Alabama same-sex marriages would have been halted during the appeals process in a written dissent. In it, he wrote that the decision to deny the stay “represents yet another example of this Court’s increasingly cavalier attitude toward the States.”

Thomas noted that the decision by the court just over a year ago to quickly stay marriages in Utah as the case was appealed “reflected the appropriate respect we owe to States as sovereigns and to the people of those States who approved those laws.” According to Thomas, Alabama’s attorney general is in an even better position to be granted a stay now that the court has agreed to address whether it is constitutional for states to ban same-sex marriage.

“The Supreme Court has telegraphed that there is virtually zero risk that they will issue an anti-equality ruling this summer.”

“Yet rather than treat like applicants alike, the Court looks the other way as yet another Federal District Judge casts aside state laws without making any effort to preserve the status quo pending the Court’s resolution of a constitutional question it left open in United States v. Windsor,” Thomas wrote. “This acquiescence may well be seen as a signal of the Court’s intended resolution of that question. This is not the proper way to discharge our Article III responsibilities. And, it is indecorous for this Court to pretend that it is.”

Concluded Thomas, “I would have shown the people of Alabama the respect they deserve and preserved the status quo while the Court resolves this important constitutional question.”

The dissent by Thomas and joined by Scalia raises questions about where the other conservative members of the court, particularly Chief Justice John Roberts and Justice Samuel Alito, may come down on the issue later this year (both men dissented in the court’s 2013 decision in Windsor, striking down the federal government’s definition of marriage as between a man and a woman). But it also illustrates, particularly Thomas’s statement that the court’s decision not to stop Alabama same-sex marriages from proceeding may be a “signal of the Court’s intended resolution” on this issue, that marriage-equality opponents have little fight left in them — especially Republican politicians.

Despite efforts by Alabama Chief Justice Roy Moore to encourage the governor and Alabama probate judges to defy a federal court order, Republican Gov. Robert Bentley said in a statement he would not take action against judges who issued marriage licenses to same-sex couples.

“This issue has created confusion with conflicting direction for Probate Judges in Alabama. Probate Judges have a unique responsibility in our state, and I support them. I will not take any action against Probate Judges, which would only serve to further complicate this issue,” Bentley said. “We will follow the rule of law in Alabama, and allow the issue of same sex marriage to be worked out through the proper legal channels.”

Just last week, House Speaker John Boehner (R-Ohio), who spent $2.5 million defending the Defense of Marriage Act (DOMA), said it is unlikely House Republicans would weigh in on the same-sex marriage bans out of  Kentucky, Michigan, Ohio and Tennessee to be considered by the Supreme Court. “I don’t expect that we’re going to weigh in on this,” Boehner said. “The court will make its decision and that’s why they’re there, to be the highest court in the land.” Meanwhile, Democrats in both chambers of Congress are expected to file a brief urging the Supreme Court to legalize marriage equality nationwide.

However, while Republicans may be wary of fighting what Thomas himself appeared to admit Monday is inevitable as marriage equality arrived in the 37th state, others are not going away so quietly. Reports indicate half of Alabama’s 67 counties did not immediately comply with the federal court order to issue marriage licenses to same-sex couples, certainly due in part to threats by Moore that those who did comply would be “acting in violation of their oaths to uphold the Alabama Constitution if they issued marriage licenses prohibited under Alabama law.” And Brian Brown, president of the National Organization for Marriage, urged Alabamians to defy the federal courts.

“A majority of the Supreme Court has cast disrepute on the impartiality of the Court by refusing to follow previous protocol and issue a stay of a lower court ruling while it is being considered by the Court,” Brown said in a statement. “The issues in play are currently under review by the Supreme Court, and allowing a lower court ruling that overturns a state marriage amendment adopted by over 80% of voters is reckless and undermines the integrity of the Court. We call on the people of Alabama to continue to enforce their state marriage laws.”