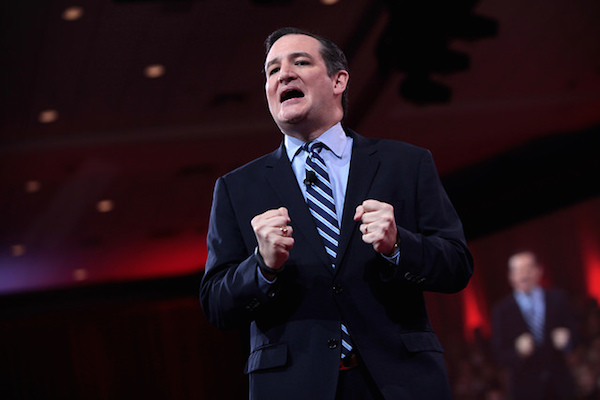 Citing the “real danger to our liberty” posed by court rulings legalizing same-sex marriage, Sen. Ted Cruz vowed to introduce a constitutional amendment later this year that would only allow state legislatures to define marriage.

“If the courts were following the Constitution, we shouldn’t need a new amendment,” Cruz told Iowa talk radio host Jan Mickelson on Monday, according to audio posted by Right Wing Watch. “But they are … making it up right now, and it’s a real danger to our liberty.”

The Texas Republican’s remarks came the same day he told a crowd of about 200 evangelical Christians in Iowa that the overwhelming number of state and federal judges who have struck down bans on same-sex marriage are “ignoring their oaths, ignoring the Constitution and legislating from the bench.”

According to The Des Moines Register, Cruz described the embrace of marriage equality as an “unrelenting assault on traditional marriage.” The remarks were made behind closed doors, but reporters were able to hear Cruz’s remarks outside the hotel ballroom.

Cruz, a likely candidate for president in 2016, has been vocal in his opposition to same-sex marriage, despite shifting public support and the likelihood the Supreme Court will rule in favor of nationwide marriage equality later this year.

He first vowed to introduce such an amendment last October, when he lashed out at the Supreme Court for “abdicating its duty to uphold the Constitution” by allowing rulings striking down same-sex marriage bans in five states to stand, thus legalizing marriage equality in all states covered by the 4th Circuit, 7th Circuit and 10th Circuit Courts of Appeals.

And last month, Cruz reintroduced in Congress the State Marriage Defense Act, which would require the federal government to defer to the marriage laws of the state where a couple resides to determine if the couple is eligible for federal benefits, in effect invalidating for federal purposes the marriages of same-sex families living in the remaining 13 states that do not recognize same-sex marriage.