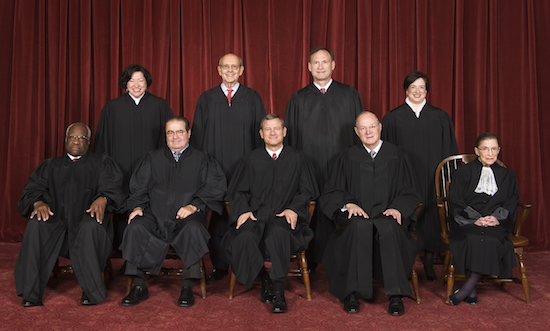 Tuesday’s oral arguments in the case determining whether same-sex couples have the right to marry might be a sign of things to come.

Or it could just be an example of the Supreme Court justices playing “devil’s advocate” to flesh out the lawyers’ justifications for their position. Throughout the two-and-a-half hour-long hearing, eight of the nine justices on the U.S. Supreme Court posed various hypotheticals and asked tough questions of the lawyers before them. The justices — with the exception of Justice Clarence Thomas — peppered lawyers for the plaintiffs and the respondents with questions about the state’s interest in prohibiting same-sex couples from being able to wed.

At issue were two major questions: 1) Does the Fourteenth Amendment to the U.S. Constitution require a state to license a marriage between two people of the same sex? and 2) Does the Fourteenth Amendment require a state to recognize a marriage between two people of the same sex when their marriage has been lawfully licensed and performed out-of-state? Ninety minutes had been allotted to discuss the first question, and 60 minutes to discuss the second. But as questioning continued, there began to appear glimpses of how the various justices might be considering ruling when it comes to the overall question of essentially legalizing same-sex marriage nationwide.

Mary Bonauto, the lawyer representing the plaintiffs, or pro-marriage equality advocates, on the first question, tried to argue reasons for why states should be required under the Fourteenth Amendment to license same-sex nuptials.

“If a legal commitment, responsibility and protection that is marriage is off limits to gay people as a class, the stain of unworthiness that follows on individuals and families contravenes the basic constitutional commitment to equal dignity,” Bonauto said. “…here we have a whole class of people who are denied the equal right to be able to join in this very extensive government institution that provides protection for families.”

But Bonauto quickly encountered resistance from Chief Justice John Roberts, who asserted that Bonauto and others in support of her position were attempting to “redefine” the institution of marriage and essentially change what it means to be married.

“Every definition that I looked up, prior to about a dozen years ago, defined marriage as unity between a man and a woman as husband and wife,” Roberts said, pushing back against Bonauto’s arguments. “Obviously, if you succeed, that core definition will no longer be operable.”

Throughout the hearing, Justice Samuel Alito, in particular, part of the court’s conservative wing, offered a parade of hypotheticals that only the most extreme anti-gay opponents have argued for a number of years, alleging — and in Alito’s case, almost obsessing — over whether legalizing same-sex marriages would lead to the legalization of polygamy and incest. Even John J. Bursch, the lawyer representing the respondents, did not go as far afield in his arguments in favor of keeping state bans on same-sex marriage in place. Instead, Bursch, at times bolstered by questioning from Justice Antonin Scalia, attempted to cast the issue as one related to federalism: the idea that the federal government has always given great deference to states in determining how to define and address marriage and other forms of relationships, such as domestic partnerships or civil unions, and that states should be able to define that through voter-approved constitutional amendments that ban the practice of same-sex marriage. According to Bursch, there is no animus towards gay people involved in defining marriage as the union of one man and one woman, merely a state interest in advancing responsible procreation. Adopting an argument echoed in many amicus briefs on behalf of the respondents, Bursch argued that extending marriage rights to same-sex couples would essentially change the definition of what marriage means, thereby cheapening the institution in the eyes of heterosexual couples and leading to more children born out of wedlock.

“…The marriage institution did not develop to deny dignity or to give second class status to anyone. It developed to serve purposes that, by their nature, arise from biology,” Bursch said. “Now, imagine a world today where we had no marriage at all.  Men and women would still be getting together and creating children, but they wouldn’t be attached to each other in any social institution. Now, the marriage view on the other side here is that marriage is all about love and commitment.  And as a society, we can agree that that’s important, but the State doesn’t have any interest in that.”

Throughout Bursch’s presentation, he was challenged on the validity of his argument by Justices Sotomayor, Breyer, Ginsburg and Kagan — the four members of the court’s liberal wing — who raised concerns with his assertions and questioned, hypothetically, if a state would have a compelling interest in denying marriage to other groups, such as couples who cannot or do not wish to procreate.

Justice Anthony Kennedy, long seen as the deciding vote when it comes to the issue of same-sex marriage, appeared to be weighing his concerns about federalism with the question of whether the state bans are actually motivated by animus towards same-sex couples.

“One of the problems is when you think about these cases…the word that keeps coming back to me in this case is millennia, plus time,” Kennedy told Bonauto in one instance. “First of all there has not been really time, so the Respondents say, for the Federal system to engage in this debate, the separate States. But on a larger scale, it’s been…about the same time between Brown and Loving as between Lawrence and this case. It’s about 10 years. and so there’s time for the scholars and the commentators and the bar and the public to engage in it. …And it’s very difficult for the Court to say, oh, well, we — we know better.”

On the other hand, Kennedy also took Bursch to task for his argument that extending marriage to same-sex couples somehow harms traditional marriage.

“…That assumes that same-sex couple could not have the more noble purpose, and that’s the whole point,” Kennedy said. “Same-sex couples say, of course, we understand the nobility and the sacredness of the marriage. We know we can’t procreate, but we want the other attributes of it in order to show that we, too, have a dignity that can be fulfilled.”

Solicitor General Donald Verrilli, in arguing on behalf of the United States, said that the opportunity to marry is integral to human dignity, and that excluding same-sex couples from marriage demeans both the couples and their children by denying them the protections and the stabilizing structure of marriage, prompting both Roberts and Scalia to question his assertions.

“…What these gay and lesbian couples are doing is laying claim to the promise of the Fourteenth Amendment now,” Verrilli argued. “And it is emphatically the duty of this Court, in this case, as it was in Lawrence, to decide what the Fourteenth Amendment requires. And what I would suggest is that in a world in which gay and lesbian couples live openly as our neighbors, they raise their children side-by-side with the rest of us, they contribute fully as members of the community, that it is simply untenable to suggest that they can be denied the right of equal participation in an institution of marriage, or that they can be required to wait until the majority decides that it is ready to treat gay and lesbian people as equals. Gay and lesbian people are equal. They deserve equal protection of the laws, and they deserve it now.”

In her rebuttal, Bonauto said the idea that marriage will change if the court allows same-sex couples to wed was a “false dichotomy,” as only same-sex couples are restricted from being allowed to take part in the institution of marriage.

“The State’s entire premise here is that if same-sex couples marry, then different-sex couples won’t and [won’t] have their children in a marriage,” Bonauto said. “…They say that what they care about is people who have children together staying together and providing a long-term, stable situation for their children. That interest applies full force in this context, because by denying marriage to same­-sex couples, you are denying not only the protection for the adults, which is independently important, you are denying those protections and that security that would come from having married parents.”