The Evolution of Hillary Clinton: From DOMA to Marriage Equality

As Clinton makes her case for the presidential nomination, it’s important to take note of her shifting LGBT positions 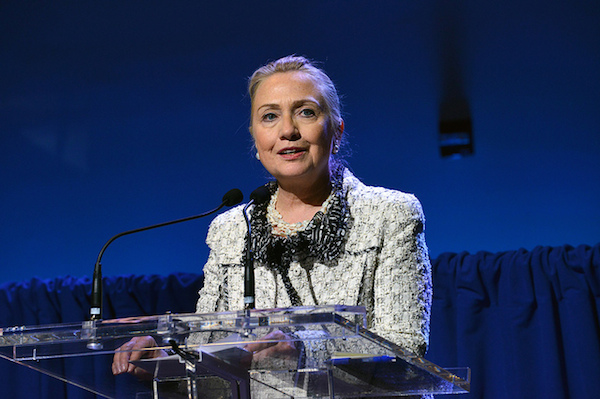 With those words, Hillary Rodham Clinton — former First Lady, former junior Senator from New York, former Secretary of State — ended two years of rampant speculation, confirming that she will once again seek the highest political office in the United States.

In a slick campaign video, Clinton spoke of everyday, hard-working Americans and her desire to be their champion. She featured families, retirees, workers, mothers, students and, almost a prerequisite for any prominent Democrat at this stage, two gay couples — complete with an upcoming wedding and a sentiment about strong families. However, though Clinton may now be positioning herself as a champion not just of the middle class but of all things LGBT, her history on that latter matter is somewhat more obtuse than she’d have us believe.

Of course, it would be improper to describe Clinton as anything less than a supporter of LGBT rights. Throughout her career, whether as the nation’s most preeminent woman during her husband’s Presidency, or her widely commended (ignoring several conservative critics) tenure as Secretary of State, Clinton has vocally supported equality. It’s a perspective often masked by two key pieces of legislation during her time in the White House: the Defense of Marriage Act (DOMA) and Don’t Ask, Don’t Tell (DADT).

The former was a Republican bill granting states the right to refuse to recognize same-sex marriages performed in other states, while also classifying marriage as between a man and a woman. Bill Clinton signed it into law a few months before his re-election, citing overwhelming support from both Democrats and Republicans in Congress (with a veto-crushing majority in both the House and the Senate) and the desire to quell any attempts from conservatives to enshrine a heterosexual definition of marriage in the Constitution.

The latter was a compromise (something Clinton herself acknowledged during the 2007 Democratic primary debates), formed after Bill Clinton’s election promises to allow gays to serve openly in the military met opposition from the Joint Chiefs, Congress and large portions of the public. DADT allowed gay, lesbian and bisexual soldiers to serve, but forced them into a legally-binding closet — military personnel were prohibited from asking a soldier about their sexuality or from harassing or discriminating against them, but the law was a far cry from the President’s original pledge.

In terms of DADT, the law directly contravened Clinton’s personal stance with regard to the rights of LGBT people

In terms of DADT, the law directly contravened Clinton’s personal stance with regard to the rights of LGBT people (in 1999 she stated, “I don’t believe [it] has worked”). She has long advocated for equal rights in terms of employment and partner benefits. White House documents, reported by Politico, show that during Bill Clinton’s presidency, Hillary Clinton used the First Lady’s office to pressure her husband into taking broader steps towards embracing gay rights, including the potential introduction of an executive order banning federal contractors from discriminating on the basis of sexual orientation. It stalled — as did the Employment Non-Discrimination Act, which would have prevented discrimination in the private sector based on sexual orientation and which both Clintons supported — but would eventually be enacted by President Obama, coming into effect this month.

During her tenure at the State Department, Clinton championed LGBT rights on a global scale. At the United Nations’ Geneva office in 2011, Clinton urged world leaders — including those from countries with horrific records on the treatment of LGBT citizens —  to “be on the right side of history” and support gay rights.

Even more landmark was Clinton’s inclusion of transgender rights in her speech, a subject seldom discussed on the world stage. During an interview with NPR’s Terry Gross last year, Clinton was asked why she chose to highlight transgender equality. “LGBT includes the T, and I wanted to stand up for the entire community,” she replied. “I don’t believe that people who are the L, the G, the B or the T should be persecuted, assaulted, imprisoned, even killed for who they are.”

Further cementing her credentials on equality for LGBT employees, Clinton introduced federal benefits at the State Department for same-sex spouses of foreign diplomats, putting them on par with heterosexual couples. In a memo provided to the New York Times Clinton wrote that “Like all families, our Foreign Service families come in different configurations; all are part of the common fabric of our post communities abroad…. At bottom, the department will provide these benefits for both opposite-sex and same-sex partners because it is the right thing to do.”

Indeed, if further proof were needed as to Clinton’s support for gay equality, her campaign has already made history by hiring the first openly gay man to manage a major presidential election campaign.

For many, however, it’s Clinton’s stance on same-sex marriage that will ultimately define her.

In 2013, after leaving the State Department, Clinton used the Human Rights Campaign’s Americans for Marriage Equality initiative to announce her support for marriage equality. “[LGBT Americans] are full and equal citizens and deserve the rights of citizenship,” she proclaimed. “That includes marriage.”

Clinton noted that her views on marriage equality have changed over time — she was staunchly opposed to same-sex marriage for personal reasons for most of her political career. Both Clintons opposed same-sex marriage during their time in the White House, a sentiment that followed Hillary Clinton into the Senate. “I think a marriage has always been between a man and a woman,” the New York Times quoted her as saying during a press conference for her 2000 Senate campaign, to which she later added that she would have supported DOMA were she in the Senate in 1996.

By 2006, Clinton noted that the way she spoke about same-sex marriage “has certainly evolved.” The following year, during the Democratic primaries, she responded to an HRC form about marriage by calling for the section of DOMA which restricted the federal government from recognizing same-sex unions to be repealed. She stopped short, however, of calling for the entire law to be dismantled or declaring support for marriage equality. Alongside her opponent, Barack Obama, Clinton continued to iterate a personal opposition to same-sex marriage, telling viewers of a forum on Logo, “It’s a personal position…. [W]e have made it clear in our country that we believe in equality. How we get to full equality is the debate we’re having, and I am absolutely in favor of civil unions with full equality.”

LGBT advocates have long argued that civil unions are a “separate but equal” measure, but Clinton had supported them as an alternative for years. “I don’t support gay marriages, but I do support extending benefits to couples, domestic partner benefits,” The Washington Post reports her telling a voter in 2000.

“I evolved over time and I’m very, very proud to state that I’m a full supporter of marriage equality right now”

As such, Clinton’s about-face on marriage equality raised more than a few eyebrows. In her much publicized interview with Gross on NPR, Clinton was asked whether she had always supported marriage equality, but had remained silent for political reasons.

“That’s just flat wrong,” Clinton shot back. Why had her views changed?

“I think evolved is the word that a lot of people have used,” she told CNN during a town hall interview last year. “It really became very clear to me that if we’re going to support marriage in our country, it should be available to everyone…. So yes, I evolved over time and I’m very, very proud to state that I’m a full supporter of marriage equality right now.”

Whether or not Clinton is to be believed — she is nothing if not an intelligent, shrewd politician — her comments echo the feelings of a majority of Americans. In 1996, when DOMA was signed into law by her husband, twenty-seven percent of the population supported same-sex marriage, according to Gallup. By 2014, that number had increased to fifty-five percent. Ten years ago, over thirty states had some manner of ban on same-sex unions — today, over thirty states have equal marriage. America continues to evolve, as does Hillary Clinton.

“Just because you’re a politician, doesn’t mean you’re not a thinking human being,” Clinton told NPR’s Gross. “You gather information. You think through positions. You’re not 100 percent set…. You’re constantly reevaluating where you stand. That was true for me.”

Clinton has been happy to take a back seat in the fight for marriage equality — she often stated that it was an issue best left to the states, and used her time at the State Department to refrain from commenting on domestic policy. Her current stance in favor, however, will be invaluable in shoring up liberal and LGBT support for the Democratic nomination. Still, she could be punished by voters in the face of potential opposition with stronger records (Gov. Martin O’Malley, for instance, approved Maryland’s marriage equality bill before Clinton made her HRC declaration.) Clinton hopes her strong past on LGBT rights will overshadow her shaky evolution on marriage.

“I’m hitting the road to earn your vote, because it’s your time and I hope you’ll join me on this journey,” she said in her campaign announcement video.

For potential voters, whether Hillary Clinton’s personal journey on LGBT issues has gone far enough remains to be seen.