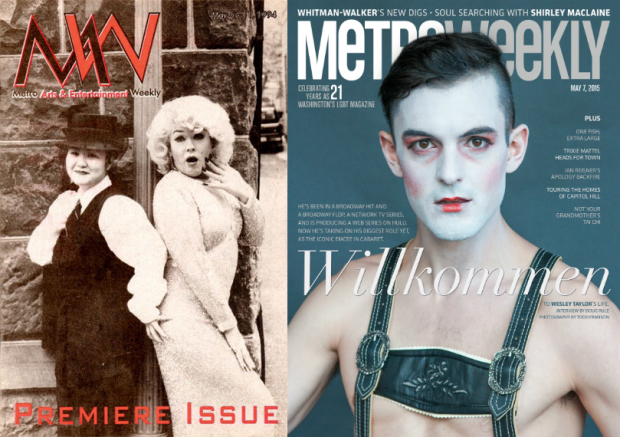 As anyone who knows me well can tell you, I’m not big on anniversary issues.

When we hit 20 last year, well, that was a landmark. It had to be addressed. Same goes when we hit 25 — the retrospection will resume. But at 21? As I see it, we’re legal now. We can drink. Big deal.

Look, I’m not being a curmudgeon. It’s just that at Metro Weekly we spend less time looking back and more time looking ahead. Or at the very least, the here and now. And right now, at this very deadline-infused, stress-induced minute, I have to say, I remain as proud and in love with what we offer to the community — and via the web, to the world — as I ever have been. To say that Metro Weekly is the most important thing in my life is an understatement. It’s what I have done for 21 years. And what I will do for 21 more, God-willing.

Over the years, we have evolved as a magazine, adding new things, venturing into different directions, broadening our scope to include topics such as technology, food, games, pets and health. But our core values have remained intact: Offer the best writing, photography, art and design to the best of our ability and provide resources, entertainment, and intellectual and visual stimulation to our readers.

If I had to define what Metro Weekly is, I’d say it’s an LGBT magazine that everyone and anyone can enjoy.

Sometimes what we cover is explicitly gay. Sometimes it’s not, as we just feel it’s something that will interest you — or at least a portion of you. If I had to define what Metro Weekly is, I’d say it’s an LGBT magazine that everyone and anyone can enjoy. And as our community gets closer to its dream of full equality under the law, as gays are no longer viewed as an aberration of society but as an important, celebratory and unique component, as something of lasting value, as normal and everyday as apple pie, it’s with pride that we offer up a magazine that encompasses as much breadth as it possibly can.

This would be the part where I tout the changes to come. And there are more than a few on the horizon, notably a big one that should be among the most dramatic things we’ve ever introduced into the magazine. We’re still working out the details but it’ll be here soon enough and we think — we hope — you’ll love it, and even want to participate in it.

I will, of course, always urge you to pick up a hard copy of the magazine. To my mind, nothing beats tangibility of flipping through an issue. And yet, there is plenty of additional content online daily at metroweekly.com, which you can remain personally alerted to by joining our email below. And feel free to take a moment and Like our page on Facebook, or follow us on Twitter. We even recently started a Metro Weekly Instagram account to better showcase one of the most essential, ongoing components of Metro Weekly: our photography, both scene and original portraiture.

Finally, I have to take a moment to thank all of those who work tirelessly to get this puppy bounding out of the crate every week (and every day online): Christopher Cunetto, Todd Franson, Chris Gerard, Richard Goldsmith, Dennis Havrilla, Rhuaridh Marr, Ward Morrison, Troy Petenbrink, John Riley, Doug Rule, David Uy, Julian Vankim and Kate Wingfield.

I’m lucky for residing in a city with a world-class readership. Lucky that you’ve allowed us into your lives for 21 years.

The other day, my mother was going on about how fabulous a recent issue was. And through her motherly praise, she said something incredibly profound that touched me deeply.

“You could have never published a magazine like this 50 years ago,” she said. “You’re very lucky.”

Mom’s right. I’m lucky. Lucky for the talented, dedicated people I work with. Lucky for the loyal advertisers who support our efforts. Lucky for residing in a city with a world-class readership. Lucky that you’ve allowed us into your lives for 21 years. Thank you for that — and for continuing to be part of our amazing Metro Weekly journey.

Randy Shulman is Metro Weekly's Publisher and Editor-in-Chief. He can be reached at rshulman@metroweekly.com.
← Previous Story Reisner and Fall: The continuing fallout from Ian Reisner’s “fireside chat” with Ted Cruz
Next Story → Prideful Moments