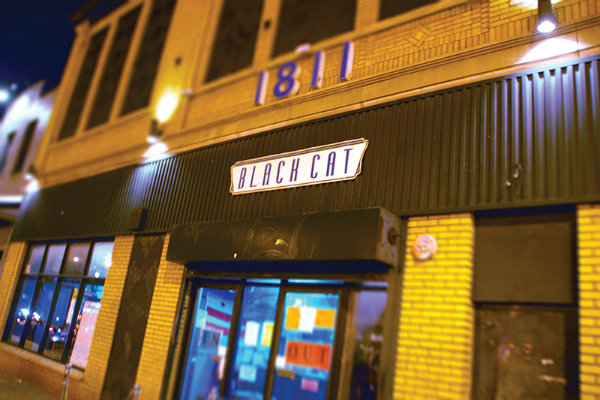 Back in 1993, Fourteenth Street wasn’t the bar-hopping locale that it is today. In fact, it was a place you didn’t want to be.

One bar, however, thrived. The Black Cat, at 14th and T Streets, was the hub for D.C.’s punk and alternative music scene. “I’ve lived in the D.C. area on and off since High School,” Josh Vogelsong, a DJ at the music venue says. “The Black Cat was always the cool punk place to go, and it was one of the only places that was all ages.”

“We’ve always strived to be an inclusive space,” Black Cat’s Maeghan Wood says. “That’s what continues to bring in people. Not only in terms of the bands and DJs, but the customers.” For many queer DJs like Vogelsong, the Black Cat not only influenced their musical taste, it gave them a place to belong. Gay/Bash is open for “all queer ages.” Says Vogelsong, “These kids are still excited. They want to hear new stuff.”

“Black Cat is the closest thing to a queer bar DC has. [It] has made the scene more creative, exciting, and inclusive.”

Today, the bar is home to several alternative queer parties. DJs Shea Van Horn and Matt Bailer of Mixtape introduce new music that wouldn’t get heard at an average gay club. “We don’t have anything against playing Taylor Swift,” Van Horn says. “But why play a song you can hear anywhere else?” The same goes for Bodywork by DJs Alex DB, and Abby Roberts. “We do Bodywork for the crowd,” Roberts says. “There’s no gimmicks. Just a music-loving group of queers who want to dance and party in a loving environment.”

For many, the Black Cat represents an alternative to mainstream gay nightlife. “Black Cat is the closest thing to a queer bar DC has,” says Mark Bliss, a regular patron of the various parties. “[It] has made the scene more creative, exciting, and inclusive.” And the contribution that parties like Gay/Bash, Mixtape, BearZerk, and Bodywork make isn’t just a social one. DJ Dean Sullivan will be celebrating Pride with his party Babe Rainbow, where he will donate a portion of the cover to the DC Center. “I didn’t want to just do a party,” Sullivan says. “I wanted to give back.”

The Black Cat has gone through a lot of changes since it opened in 1993, but one thing remains constant — its roots in punk culture. “There’s a community space element to the club,” Wood says, “but it’s still a punk club. You combine those things and you get events like Gay/Bash or Bodywork.”