If your pet is not handling storm season well, you may want to take them to a behavior specialist

We all have childhood memories of hiding under our covers at night during a storm. Fears of the unknown rack our minds with each unexpected boom of thunder and flash of lighting piercing the sky. Although the fear is real, once the storm passes we calm down.

As adults, it’s a distant memory, but what if the same can’t be said of your furry loved one? For some owners, this very scenario is relived through their furry children. While symptoms vary in each animal, pet owners need to realize that there is a name for such a phenomenon: Storm Anxiety.

Defined as the overreaction to certain stimuli, storm anxiety is witnessed by many owners, often unknowingly. Triggers can range from a simple thunderstorm to more extreme weather changes. Both dogs and cats can experience the disorder, however dogs tend to be more affected by it than their feline counterparts. Characterized by panting, lowered body posture, and drooling, among other symptoms, the disorder’s intensity is specific to each pet.

Dr. Jennifer Hays of BluePearl Veterinary Partners in Virginia Beach knows the symptoms all too well. As an Emergency room vet for the twenty-four hour hospital, she encounters animals experiencing extreme bouts of the disorder. Hays describes a situation in the middle of the night that left her having to help a dog and its owner. “I had a client who had brought in their dog during a thunderstorm because it had jumped out of the window and had gotten lost,” she says. The result was a wounded pup and a terrified owner.

As extreme as this situation was, it’s something for owners to take into consideration when evaluating their own pet’s behavior. In order to prepare owners for what may be the worst, Hays has a proven method to help prevent extreme cases from occurring. It’s called a “thunder shirt.”

“It’s a shirt created to wrap around your pet’s body,” she says. “It fits snuggly and creates the feeling of a hug.” The shirt simulates a sense of security prior to anxiety attacks, and while it’s a preventative measure, more lasting options can be considered if symptoms — such as self-destructive or erratic behavior — worsen.

“You may be referred [by your family vet] to a behavioral specialist,” Hays says. The specialist will use specific training methods to calm down your pet and get them to focus their attention on something other than their own anxiety. Some specialists may also prescribe anti-anxiety medication if necessary.

As the parent of a dog who suffers from separation anxiety, Hayes has personal experience with such issues, and she encourages owners dealing with more severe cases to remain patient.

“The most important thing when it comes to any kind of anxiety and behavior disorder is don’t get frustrated,” Hays says. “It takes time. Pets are learning something from you. When you get upset, they get upset. Follow things exactly as planned and [the treatments] should work.” 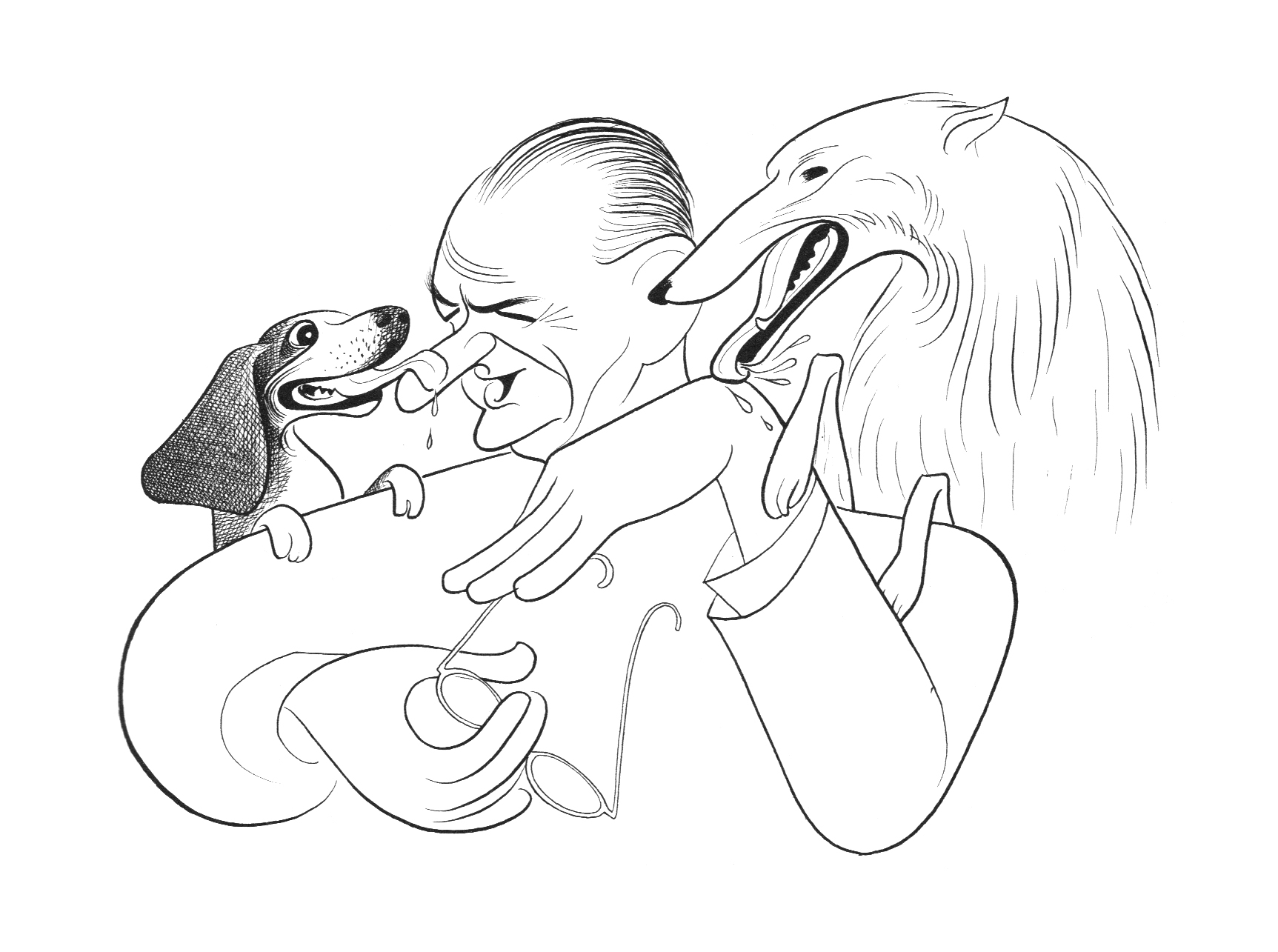 In a career that spanned a full nine decades, the late, legendary caricature artist Al Hirschfeld churned out numerous drawings and sketches featuring canine companions. And the latest online thematic exhibition from the Al Hirschfeld Foundation offers a veritable parade of famous pets from the 20th century as seen in Hirschfeld's works.

The lineup includes everything from Lassie, the collie who made her MGM debut in 1943 alongside child stars Roddy McDowell and Elizabeth Taylor, and was drawn by Hirschfeld in a rare colored painting in 1958, when the canine was a TV star to Blanco the Collie and Him the Beagle, two of President Lyndon Johnson's dogs when he was in the White House, sketched by Hirschfeld in 1969.