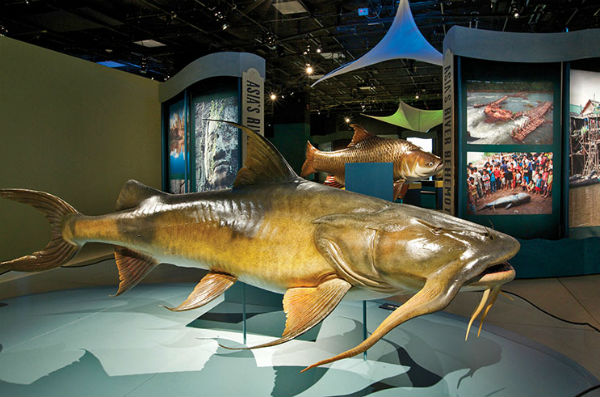 Zeb Hogan has spent most of his life searching for the world’s largest freshwater fish. It all started with one huge catch. “I was working in southeast Asia near the Mekong river,” he says. “My friend invited me up to Northern Thailand where a fisherman had caught a Mekong Giant Catfish.”

That was 20 years ago. In 2005, ten years later, Hogan met another Giant Catfish in Thailand, but this one was unlike any other he’d seen. It measured eight feet, ten inches and weighed over 600 pounds.

“The story about this fish went out, and I was expecting to hear stories of bigger fish from the Amazon, from the Americas,” he says. He began to scour the globe for larger freshwater fish. Out of this passion was born Monster Fish, Nat Geo Wild’s television show tracking Hogan’s journey to find the world’s largest freshwater fish. For ten years, Hogan has been searching for this “monster fish,” and today, the results of his quest can be found at the National Geographic Museum in “Monster Fish: In Search of the Last River Giants.”

Upon entering the exhibit, visitors trace Hogan’s steps through river basins around the world. With life-size models of these underwater giants and interactive exhibits that detail their lives, we learn about the delicate role they play in their ecosystems. The exhibit also features clips from the show, where Hogan delves into a region’s culture to understand how fish affect the locals.

However, the freshwater giants are quickly disappearing. Seventy percent are endangered,, as humans threaten their numbers and their habitats. Due to their size, they’re over-fished for the substantial food they can provide. In addition, pollution and invasive species make survival an everyday battle.

Hogan hopes that the exhibit educates adults and children alike to the importance of the freshwater behemoths. He wants humanity to become better stewards of river ecosystems, helping fish like the Giant Mekong Catfish will continue to populate across the world.

The National Geographic Museum 1145 17th Street, N.W. is open every day from 10 a.m. to 6 p.m. Admission for Monster Fish is $11 for adults; $9 for National Geographic members, military, students, seniors and groups of 25 or more; $7 for children 5-12; and free for local school, student and youth groups. Monster Fish runs until October 11th. nationalgeographic.com.

Next Story → Shoes with Souls