Bernie Delia and Ryan Bos reflect on past celebrations, and what Capital Pride still has to offer 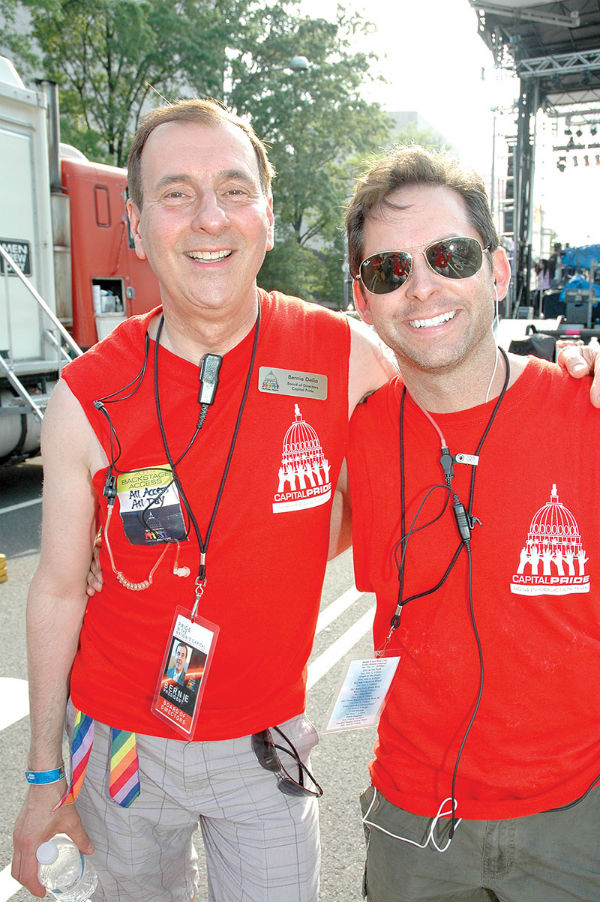 Bernie Delia remembers being amazed at the sheer size of the crowd during his first Capital Pride in 1987.

“It just seemed like a huge number of LGBT folks, all gathered together in one spot, which I had not witnessed before,” Delia says.

But Delia, board president of the Capital Pride Alliance, which currently produces the annual celebration, also acknowledges that the reach of Pride was much more limited back then.

“It was very much a one-day afternoon event,” he says. “We gathered for the parade up around Meridian Hill Park and marched down to P Street Beach. We were behind Francis Junior High until about six o’clock. I think it was not particularly noticed beyond the confines of the Dupont Circle area, which is where the majority of the LGBT community probably was at the time. It was certainly where most of the bars were.”

Fast forward 18 years. Capital Pride seems to have weathered its growing pains. Last year, its various affiliated celebrations drew an estimated 350,000 attendees to the Washington area. The parade, once limited to nonprofits and hyper-local community organizations, now boasts prominent corporate sponsors like Marriott and Hilton, and many major companies send a contingent of employees, either on foot or on float, traversing the 1.5-mile parade route through the Dupont and Logan Circle neighborhoods. The festival has been moved from the tiny Francis Field to a four-block span along Pennsylvania Avenue, abutting the U.S. Capitol. And this year’s celebration marks an important milestone: the 40th consecutive celebration of Pride.

“Even though we’ve been doing it for 40 years, it’s still proved very significant and relevant,” says Ryan Bos, executive director of the Capital Pride Alliance.

For Bos, whose first Pride was in Indianapolis in 1996, the East Coast’s spin on the celebration proved to be much more exciting and more diverse. He moved to the area a few years later, first attending Baltimore Pride and then the much larger Capital Pride a few weeks later.

“I think just because of where we’re located, situated in the nation’s capital, our community as a whole has seen a boom,” Bos says. “People are moving back to the city in droves, and that is impacting the LGBT community as well. There’s just this excitement. I think the makeup of this community is expanding as well. That’s why, for us, we use the ‘A’ when we refer to allies, when we refer to LGBTA, because there’s so much of that allied community that’s a part of our greater community.”

“It’s a wonderful celebration, and I think it’s one of those times when we are at our best, when we come together to celebrate.”

In 1997, One in Ten took over production of the event, moving it to Freedom Plaza, dubbing it the Freedom Festival, and hiring the Village People to headline. The following year, however, the celebration floundered after a failure by the organization to purchase rain insurance in 1998 (and yes, it poured that year). The Whitman-Walker Clinic stepped in and rescued the event, producing it jointly with One In Ten in 1999 and 2000 and then taking over as sole producer in 2001, greatly expanding the festival’s Pennsylvania Avenue footprint in the process. For the next eight years, the clinic played the dominant role as Capital Pride’s producer, before handing the reins to a newly-constituted, independent entity, the Capital Pride Alliance, in 2009.

“Whitman-Walker decided that, as wonderful as it was to help produce Pride, it really was not part of their core mission, which is healthcare operations,” says Delia, who is the last remaining original board member from the time the Capital Pride Alliance was formed. “They needed to divest themselves of the responsibility of doing that. I think the community was extraordinarily grateful then, we remain grateful to Whitman-Walker for what they did.”

Delia also credits the Capital Pride Alliance’s board of directors and its volunteer staff with having overseen the growth of the organization, and the success of recent Pride celebrations.

“When we took this over from Whitman-Walker, we weren’t certain whether we’d be able to do this on our own at first,” he says. “And we were. We obviously had help from Whitman-Walker, certainly in 2009 and 2010, but the organization has grown and flourished, and the response has been very positive within the community.”

That success, Bos says, is due in part to the Capital Pride Alliance’s decision to seek input from the community. That includes through word-of-mouth, one-on-one discussions with community leaders and heads of various organizations, and focus groups or community forums that raise important goals or agenda items for the Alliance to tackle.

“I think we need to have a good pulse on our entire LGBT community,” says Bos. “So my hope would be that as the organization continues to grow, we find other ways for our organizations to collaborate, and find new ways to promote the things they do.”

“I think that we are very cognizant of what’s going on in the community around us,” Delia adds. “We have a large number of folks, between the board and our producers, and our staff members. We not only do this work, but we’re members of the community. We’re members of other organizations. We hear things and talk to folks. And I think we bring that information to Capital Pride, and, in many respects, we form plans and make decisions based on information and feedback from the community. So we’re going to continue doing that.”

Both Bos and Delia stress the diversity of Capital Pride and its ability to be all-encompassing, offering a smattering of parties, concerts and educational events to try and satisfy as many people as possible. But they also say the ability of the community to gather together, to celebrate past victories as well as advocate for future change, really encompasses what Pride is supposed to be all about.

“It’s a wonderful celebration, and I think it’s one of those times when we are at our best, when we come together to celebrate,” Delia says. “And I think we do that with great class and style and in a way that everybody has a lot of fun, remembering where we were, and where we hope to be.

“You know, last year, when we had the first military color guard — in any Pride Parade, anywhere in the United States — we got a lot of people reacting to that in a very positive way, members of the military, former members of the military, who never thought they’d see that day that the Army would authorize a military color guard,” he adds. “To give all those people that spark of joy and hope really makes it worthwhile.”

The Capital Pride Parade runs from 4:30-7:30 p.m. on Saturday, June 13, departing from 22nd and P Streets NW and ending at 14th and S Streets NW. The Capital Pride Festival takes place from 12-7 p.m. on Pennsylvania Avenue NW, between 3rd and 7th Streets. See the maps for both on page 66. For more information, and a full schedule of events, visit capitalpride.org.

John Riley is the local news reporter for Metro Weekly. He can be reached at jriley@metroweekly.com
← Previous Story Wilson Phillips: Holding On for More
Next Story → Photo Flashback: Capital Pride’s 25th Anniversary