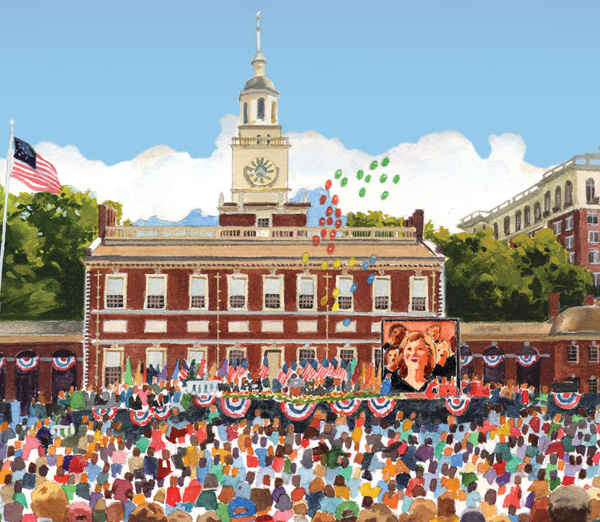 Rehoboth Beach or Provincetown? Or maybe just stick to D.C.?

Any other year, all would be fine picks for celebrating Independence Day. But this year? The only place to be on July 4 — particularly if you’re gay — is Philadelphia.

“This is truly not to be missed,” says Malcolm Lazin of the National LGBT 50th Anniversary Celebration. “I think this will go down in gay history as one of the seminal events. As people remember gatherings on the National Mall, I think they will remember the gathering at Independence Hall.”

Lazin is chair of the celebration, which offers a full slate of mostly free programming over the long weekend — from Thursday, July 2, to Sunday, July 5. One of the lead events is an outdoor concert from Live Nation set for Friday, July 3, at Penn’s Landing and symbolically priced at $19.65. The lineup is heavy with drag queens affiliated with Philadelphia’s Drag Wars competition, put on by Mimi Imfurst of RuPaul’s Drag Race. Adore Delano is another RuPaul alum performing at the concert, which also features openly gay singers Ferras, an up-and-coming pop artist with strong ties to Katy Perry, and Jonathan Allen, an opera-trained semi-finalist from season eight of America’s Got Talent. Aubrey O’Day and Shannon Bex, former members of P. Diddy’s girl group Danity Kane now comprising the alternative dance-pop duo dumblonde, will host.

Other standouts of the weekend include an unprecedented five exhibitions on different aspects of LGBT History at prominent institutions, including the National Constitution Center, the Liberty Bell Center and the African American Museum in Philadelphia, panel discussions on national LGBT issues in the areas of law and politics,and a Sunday street festival in Philly’s gay district.

The centerpiece of the weekend is a gathering in front of Independence Hall on Saturday, July 4. Comedian Wanda Sykes will emcee the afternoon ceremony featuring many of today’s movement leaders. It’s partly meant to be a celebration of the remarkable progress made over the past 50 years, but mostly, it’s intended to reflect on the time, exactly 50 years ago — July 4, 1965 — when 40 gays and lesbians decided to take an unprecedented stand for gay rights by picketing at Independence Hall. At the time activists only knew of roughly 200 people in the whole country who were openly gay.

These 40 “gay pioneers” were chiefly from Washington, New York and Philadelphia, and were recruited to Independence Hall by Washington’s Frank Kameny and Philadelphia’s Barbara Gittings — “without doubt the father and mother of the LGBT civil rights movement,” Lazin says. Kameny and Gittings, both now deceased, organized four more pickets at Independence Hall, calling them Annual Reminders. The last one drew an impressive 150 demonstrators, but it was overshadowed by the landmark Stonewall riots in New York one week earlier. Seizing on an opportunity, Kameny and Gittings immediately suspended the Reminders and shifted gears, planning a march that would commemorate the first anniversary of Stonewall. It attracted well more than 2,000 people.

“We’re the only minority community worldwide that is not taught as history — at home, school or religious institution.”

The Annual Reminders faded into obscurity until a decade ago, when Lazin first sensed some lessons weren’t being shared and important connections were being lost. “We’re the only minority community worldwide that is not taught as history — at home, school or religious institution,” he says. “That has huge movement impact.” In 2005, Lazin organized a smaller-scale 40th anniversary tribute — but it was off-site and held in May, as part of the Equality Forum for which he serves as executive director.

“We made a promise then to Frank and Barbara that there would be a 50th anniversary,” he says, “and that that anniversary would be at Independence Hall on July 4th. We’re proud to be able to have kept that commitment.”