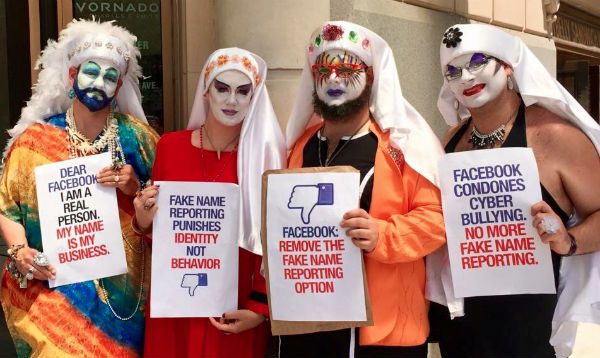 More than a hundred activists belonging to the #MyNameIs coalition protested outside Facebook’s headquarters on Monday, claiming that their “real names” policy is discriminatory. The policy allows people with names assumed to be fake to be reported and blocked.

The coalition, comprised of drag entertainers, transgender and gender nonconforming individuals, Native Americans, and survivors of domestic violence, claim they are more likely to have their names reported as fake than their white, heterosexual, gender-conforming counterparts. As such, it’s more likely that they will be blocked or prevented from using the site unless they can provide official documentation attesting that their names are authentic.

Closer to home, the D.C. chapter of the Sisters of Perpetual Indulgence, a troupe of drag queen activists, held their own protest outside Facebook’s Washington headquarters.

Similar protests last year received a great deal of press, promting a public apology from Facebook’s Chief Product Officer, Chris Cox. The coalition tried to establish a working relationship with leaders within the Facebook hierarchy to improve the policy, even meeting with company higher-ups four separate times. But nothing significant ever resulted from those meetings.

“We were trying, at first, to work with them, but at this point, we feel they’re just stringing us along,” says Menlo Park protest organizer Lil Miss Hot Mess. “Many people get blocked and reported and don’t know what to do, because if they’re already marginalized, they’re not necessarily in a position to be public about it…. Facebook allows marginalized groups a place to build a community and for people to share resources. It’s like taking away somebody’s phone or not allowing them to get mail.”

The coalition wants Facebook  to develop another system that would authenticate a person’s identity without requiring users provide identification documents containing private information. They suggest it could be similar to Facebook’s existing “trusted contacts” system, which allows friends to confirm a user’s identity. The coalition also wants the company to institute an accessible appeals process, as users currently have no way of contacting customer service.

“Facebook needs to adopt a policy based on behavior, not identity,” says D.C. Sister of Perpetual Indulgence Allie Lewya. “Being able to present myself as Sister Allie is an important part of the ministry of the Sisters. That anonymity, in not using my male name, allows me access to spaces that I otherwise would not have access to. Going into a bar as a boy is completely different from going in as a Sister. As a Sister, people will come up to me, tell me their life story, cry on my shoulder.”

“The authentic name requirement has defined and distinguished our service from its earliest days,” it says. “We firmly believe in and are committed to our authentic name policy, and ask that everyone on Facebook use their authentic name on their profile.

“Having people use their authentic names helps protect our community from dangerous interactions, like when an abusive ex-boyfriend impersonates a friend to harass his ex-girlfriend, or a high school bully uses a fake name to post hateful comments about a gay classmate.

“When people use their authentic names on Facebook they are more accountable for what they say. People can be assured that they’re really connecting with their loved ones, and no-one can hide behind an anonymous name to bully, taunt or say insensitive or inappropriate things. This creates a safer community for everyone.”

“This dangerous and discriminatory policy is yet another indication that Facebook is out of touch with the majority of its users, especially those who fall outside of the company’s employee demographics that are predominantly straight, white, and male. Whether you use Facebook or not, this fight is about the future of digital culture, including everyone’s right to maintain privacy and express their truest selves.”