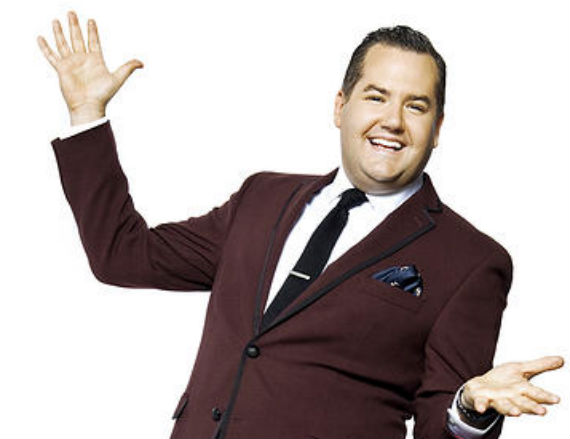 Ross Mathews will marry a gay couple from Texas on a float in the Capital Pride Parade this afternoon.

The couple, George Carrancho and Sean Franklin, have been together since 2007. They met in Texas, but then moved to New York in 2011 after Carrancho was transferred there for his job. They have been planning their wedding since 2012, but have never been able to work out the timing or coordination with their families. Now, Carrancho and Franklin will be married in D.C., and Marriott is helping their families travel to the District to attend the wedding.

“Our main priority was always to have our families at our weddings,” says Carrancho. “Both of our families love and support us and we want them to celebrate this special day with us.”

Mathews will officiate the couple’s wedding ceremony on top of Marriott International’s float during the Capital Pride Parade. He has partnered with hotel giant Marriott as part of its #LoveTravels campaign, which encourages travelers to share their personal stories. Marriott, known for its pro-LGBT record and policies — which earned the company a 100 percent rating on the Human Rights Campaign’s 2015 Corporate Equality Index — has deliberately included stories of LGBT couples and families in #LoveTravels. While weddings have been performed at Capital Pride’s annual festival in previous years, this one will be the first performed during the parade.

For Mathews, the decision to officiate Carrancho and Franklin’s wedding was an easy one to make.

“I’m excited to come to D.C. because it’s one of my favorite cities. I have so many friends there. I always have a great time when I go,” says Mathews, who will be attending his first Capital Pride celebration. “But it’s important to do this particular thing in Washington, D.C. because of the time that we’re at. You know, we’re awaiting a Supreme Court decision on marriage equality.”

Saying that Marriott wanted to do something “bold,” Mathews noted that Carrancho and Franklin’s native Texas is one of 13 states left in the country that does not have marriage equality.

“They can’t do it in their [home] state, so Marriott International wanted to bring me to D.C. to do it in Capital Pride, as the float marches down the parade route, with tens of thousands of people on the sidewalk,” Mathews says. “They’re going to see George and Sean get married, with me officiating. And hopefully the Supreme Court justices are looking out their window, and seeing the love and the celebration of these two amazing guys’ wedding day.

“I think it’s important to come to Capital Pride at this time in history because this is where the Supreme Court justices work, where they live, where they can see the celebration on the streets, or see the love on the streets,” Mathews continues. “You know, maybe it’s not just black-and-white, staring at the Constitution, staring at legal briefs, but they’re actually seeing LGBTQ people celebrating the community. And I hope that by seeing that, maybe it will humanise it a little bit more, and if any justices are on the fence, seeing the kind of love and celebration, and the wedding that Marriott and myself are going to do, maybe that will push them over the edge. They’re literally making the decisions right now that will affect us for the rest of our lives.”

In a twist of fate, Mathews had already met Carrancho and Franklin at the GLAAD Media Awards in New York, but says the three of them did not realize that they’d cross paths again.

“None of us knew, at the time, that if you fast forward four weeks, that I would be officiating their wedding at Pride,” says Mathews. “And so when this came up, they were like, ‘We just met,’ and I saw the picture and said, ‘I just met them!'”

Mathews insists he is taking his responsibility as an officiant seriously. He has been corresponding with the happy couple, including pictures of what they’re going to be wearing so that he can coordinate his own clothes, and is trying to “tailor-make” the wedding to meet the couple’s expectations. That said, Mathews has a feeling this wedding might tend towards a more lighthearted tone.

“Listen, I don’t think this is going to be a stuffy wedding,” he says. “I think we’re going to be open to people screaming and cheering and yelling and wanting to throw those beads. People are going to be excited to see us doing this…. It’s going to be quite a deal. I’ve never seen anything like it in my life.”

But Mathews also has praise for Marriott for being out front and open about its support for LGBT rights, noting that corporate support can help bolster the cause.

“I think more companies should step up like this,” he says. “You see it all the time with laws. When the companies get behind the people, some of the laws change. It happened in Indiana with that law…. I think it’s fantastic what Marriott is doing, and I’m so proud to be taking part.”

As for himself, the flamboyant and larger-than-life Mathews expects to enjoy his own Pride experience after the parade, particularly at Sunday’s festival, where he’s looking forward to a certain act.

“Wilson Phillips is coming?!” he squeals. “I did not know that, and I’m friends with Carnie Wilson. I’m going to text her as soon as I get off the phone and tell her we’re going to be in D.C. together. I can’t wait!”

John Riley is the local news reporter for Metro Weekly. He can be reached at jriley@metroweekly.com
← Previous Story ACLU files transgender discrimination lawsuit in Gloucester County
Next Story → The Meaning of Pride (video)