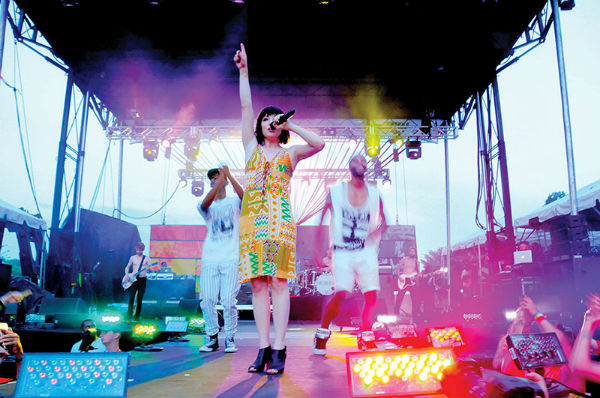 Even a thunderstorm couldn’t dampen the festivities at the 40th anniversary celebration of Capital Pride this past weekend.

Toward the end of Sunday’s hot and humid Pride festival, sweat-drenched D.C. Pride-goers were ordered to run for cover during a late-afternoon downpour. A few fearless souls, undeterred by the weather, continued to frolic, dance or hula-hoop even as lightning crackled overhead.

Once the storm had passed, the crowd quickly reassembled around the main stage — those who were holding on to see Wilson Phillips. The pop trio fared better with the weather than fellow ’90s hit-makers En Vogue, whose stellar appearance two hours earlier started in sprinkles and ended in sheets of rain.

“I can’t believe you stayed here through the rain,” singer Carnie Wilson told the crowd, during a well-received set that included covers of “Dancing Queen” and “California Dreaming,” as well as the group’s hits. “You are gorgeous!”

While the stage hadn’t completely recovered from the rain — local backup dancer Mathew Talley almost tumbled due to a wet spot — it went unnoticed by the crowd, who were instead swept up in Carly Rae Jepsen’s chirpy and sweet embrace. The Canadian pop artist briefly stepped off the stage and into the crowd to bask in the moment during her 2012 breakout hit “Call Me Maybe.” She also introduced the talented Talley and his partner — in dance, and in life — Camal Pugh before the up-and-coming dance duo performed sparkling, high-energy original choreography to Jepsen’s new hit “I Really Like You.” Talley and Pugh, along with fellow dancer Marcellus Borland, also supported Katy Tiz earlier that afternoon — as they did with Betty Who last year — but Jepsen was the first to single them out on stage.

“We really weren’t expecting her to stop everything,” Pugh said. “That was the most awesome thing ever.”

Even with the day’s dramatic weather — which included a faint yet discernible rainbow appearing to the left of the Capitol — most people in attendance at Sunday’s festival were determined to keep spirits high, celebrating Pride come what may.

Don’t Miss: More than 500 Photos from the Capital Pride Festival

“The rain was nothing more than a brief, momentary interruption of what was otherwise a successful Pride celebration,” said Bernie Delia, the board president of the Capital Pride Alliance. “The whole celebration went extraordinarily well.”

It was a sentiment echoed over and over again by festival-goers: that the sense of camaraderie with their fellow LGBT community members, not any particular act, keeps bringing them back, year after year.

“I’m just looking forward to being with friends and celebrating our Pride, being happy to be gay together,” said Matthew Schottland.

Parade watchers of all ages, from high school students to senior Pride veterans, including a substantial number of families with young children — straight and gay alike — lined the streets along the parade route. As the floats passed by, spectators alternated between shouting words of encouragement for marchers and performers and screaming for beads, candy and other small prizes being thrown into the crowd.

“I just like to see all the people coming together, and, of course, the alcohol. Come on, you can’t have a Pride without booze,” quipped veteran spectator Andre Simpson as a contingent of marchers tossed prizes into the crowd and, armed with Super Soakers, doused the spectators around him with spritzes of ice-cold water. “And beads. Beads and balls flying at your head. Where else can you go and there are balls flying at your head? Hello, welcome to D.C.”

“What I love about Pride parades is that everyone is just happy to be themselves. I think that’s the number one message.”

While some floats or marching groups went for the more revealing option of baring some skin, others seemed intent on making a statement. Most notable among the latter: a contingent of queer, undocumented immigrants marching with LGBT community center Casa Ruby, who crafted a movable jail/detention cell with a person inside.

“I guess you just forget that there’s so many sub-categories of people who aren’t represented at all,” Deidy Cordero, a resident of Springfield, Va., said of the undocumented marchers’ display. “First to be gay, then trans, then a person of color, and then undocumented, there’s so many levels of injustice. It definitely brought that attention to my eyes, so I think it will make everybody else think about it, too. Because sometimes you do forget.”

Overall, though, Cordero, at only her second Pride, was drawn to the parade because of the upbeat nature of the celebration.

Don’t Miss: More than 600 Photos from the Capital Pride Parade

“What I love about Pride parades is that everyone is just happy to be themselves. I think that’s the number one message, just to be yourself, to not be afraid, and love one another,” she said. “I’m just looking forward to being with people who are happy and want to spread love.”

Beyond political statements, the Capital Pride Alliance gave out 10 different awards to floats and displays. This year’s Judge’s Award went to Maryland-based hotel giant Marriott International, who had television’s Ross Mathews officiate a wedding between a gay couple presently unable to marry in their home state of Texas. The U.S. Armed Forces Color Guard, which made history when it became the first color guard to kick off a gay Pride parade in the nation at last year’s Capital Pride celebration, won the Best Public Sector Contingent Award.

Check It Out: A Banner Pride

Saturday’s parade was also a first for the members of the Ramsey family, from Louisville, Ky. — “the blue city in a red state,” as mom Kelly put it. They were in the middle of looking at colleges with their son and daughter when they happened across the parade.

“We took them to museums, and we thought, ‘This is also part of a reasonable education for your kids,'” Kelly added. “It’s just part of raising a conscious, socially responsible child, to make sure they understand that everyone has a place in society. How can you object to people having such a good time and celebrating who they are?”