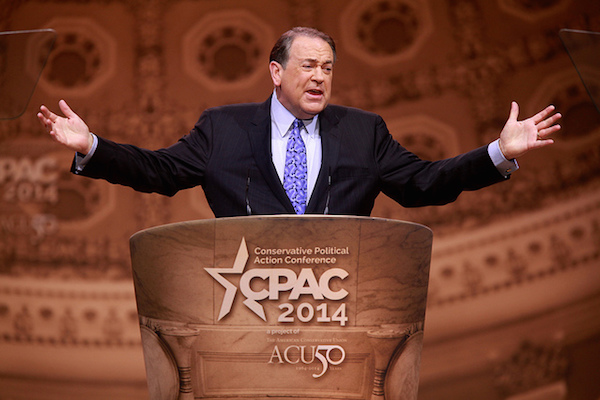 The National Center for Transgender Equality and other pro-transgender groups hit back at former Arkansas Governor Mike Huckabee after comments the Republican presidential aspirant had made about transgender people at a conference earlier this year came to light.

The video of Huckabee’s speech to the National Religious Broadcasters Convention (NRBC), held in Nashville, Tenn., in February, was posted to YouTube by the conservative news outlet World Net Daily, whereupon reporters from Buzz Feed watched the videos and first reported on the comments. A visit to the YouTube page that used to carry the video now bears a message reading: “This video has been removed as a violation of YouTube’s policy against spam, scams, and commercially deceptive content.”

In his speech to the NRBC, Huckabee joked about transgender people, saying he wished he could have used the excuse to be able to shower with the girls in high school gym class, saying, “I wish that someone told me that when I was in high school that I could have felt like a woman when it came time to take showers in PE. I’m pretty sure that I would have found my feminine side and said, ‘Coach, I think I’d rather shower with the girls today.'” Huckabee also railed against transgender nondiscrimination protections in public accommodations, telling the audience, “For those who do not think we are under threat, simply recognize the fact that we are now in city after city watching ordinances say that your seven-year-old daughter, if she goes into the restroom cannot be offended and you can’t be offended if she’s greeted there by a 42-year-old man who feels more like a woman than he does a man.”

“It is an absolute disgrace what Mike Huckabee keeps joking about, about grown men and teenage boys sneaking into the high school girls’ showers to do whatever they think is appropriate,” Keisling said. “It is an absolute shame, for someone who used to be a serious minister and a serious politician, what he has sunk to. He’s running for president pretty much to sell books or something. But this kind of comment is even below the lowest of that.

“He’s either being a creepy polemicist, or just a straight-up pervert,” Keisling said of Huckabee. “This is just so beneath the dignity of a grown adult. Shame on him.”

When asked why conservative groups who oppose transgender rights obsess so much over restrooms and shower facilities, Keisling added that the bigger question should be why the political Right is obsessed with sexualizing teenage girls.

“This is a total, intentional misrepresentation of these laws that protect trans people,” Keisling said. “No trans person anywhere in the county is permitted to do anything as creepy as Mike Huckabee wants to do. And he would be arrested for what he says he wants to do. And so would anyone else. This is not a transgender problem, this is a creepy old politician problem.”

Emily Martin, with the National Women’s Law Center, also pushed back against Huckabee’s screed, saying, “The idea that trans women aren’t real women, and that trans men aren’t real men, is out of touch, behind the times, and is nothing more than a justification for discrimination.”

The Human Rights Campaign also issued a statement implying that Huckabee’s comments did not stray far from some of his other offensive comments about the LGBT community.

“This is hardly surprising to those of us who remember the Mike Huckabee that likened being LGBT to drug abuse,” said JoDee Winterhof, HRC’s vice president for policy and political affairs. “He may have launched his campaign in Hope, but his mockery of transgender citizens is a clear indicator that Huckabee’s vision for America is one that tolerates hate.”