Apple Music: The future of streaming is surprisingly messy

Apple Music is a bold, if uncharacteristically messy, attempt to dominate the world of streaming music 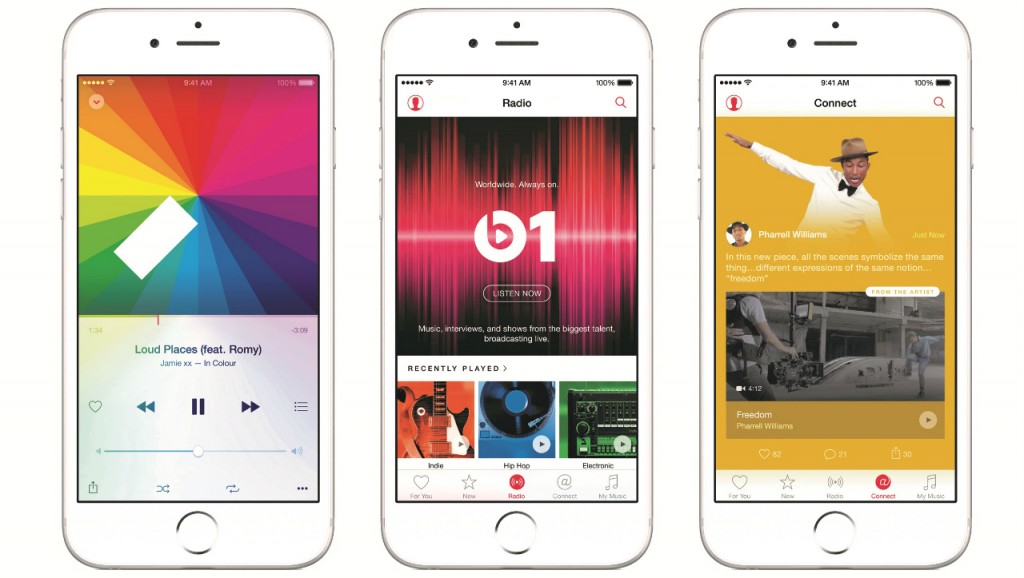 For most of the ’00s, only one name mattered in music: Apple. With iTunes and iPods, Apple dominated everything. They commanded the lion’s share of downloads, oversaw the virtual obsolescence of CDs, capitalized on the digital revolution and led the market in changing the way we condsume our music.

And then, something changed. As fast, reliable internet became more ubiquitous, music became more ephemeral. Spotify, Pandora, Rdio, and a host of other services popped up, offering ways to enjoy music without the expense of paying for every single track or the illegality of downloading from illicit sources. For a simple fee — or the radio-aping inconvenience of adverts between tracks — users could enjoy thousands of songs every day, without ever having to give Apple a cent.

Needless to say, that was never going to sit well with a company that loves money more than Scrooge McDuck. Desperate to stake its own claim to the streaming empire — a market Google and Microsoft have long-since joined on their Android and Windows platforms — Apple needed its own competitor. Utilizing the various services at its disposal, Apple combined Beats Music, iTunes Radio, iTunes Match and its iCloud storage solution into one universal service. Meet Apple Music, the next step in the company’s attempts to dominate every aspect of our lives.

At first glance, it’s a compelling system. All 43 million iTunes songs are available to stream. Your existing music collection is carried over and will now be accessible from anywhere you have access to your account. There’s a social network of sorts on board, letting artists connect to their fans. Beats Radio livestreams songs around the world, offering flagship shows in London, NYC and L.A. There are playlists generated using an algorithm as well as curated lists by Apple employees and music aficionados. What’s more, it’s all yours for just $9.99 per month, with the first three months thrown in gratis.

There’s a lot on offer. And, unfortunately, Apple uncharacteristically stumbles by incorporating it all into one app. Usually the company considers design of paramount importance — often at the expense of other areas. Here, it seems as though Apple tasked several teams with designing the various components of Music, then hastily slapped them together for the finished product.

Traditional broadcasters would do well to be worried about Beats 1. Apple’s prior successes are proof that the company usually knows exactly what it’s doing.

Setting Music up for the first time, for instance, you’re tasked with picking your favorite genres and then highlighting certain artists that you like — Apple uses this to curate playlists and album suggestions, much like other services. Annoyingly, however, they settled on Beats Music’s dynamic bubble interface for choosing artists; they float, they bump against one another, they drift offscreen. I found it so obtuse that I simply gave up and said I was done with only a handful selected. That’s something Steve Jobs would have considered unacceptable.

After that, however, you’re greeted with design flourishes that are typically Apple. “For You” is where you’ll find personalized recommendations, and it’s a gorgeous, dynamic list of track covers and clean text. If you want more suggestions, simply drag down to refresh and they’ll slide into view — but you’ll keep the old ones, too, so can always jump back to a previous playlist.

Next, you’ll find “New.” Here, unsurprisingly, is where Apple introduces new artists, albums, releases, and the latest playlists from Apple’s music editors. You can also choose playlists to suit a variety of tasks, such as driving, holidaying and, rather morosely, breaking up. Perhaps don’t listen to the Feeling Blue playlist immediately after that…

Radio is where Apple is making its biggest splash. Alongside the usual, genre-specific, curated radio stations that you’d expect from other services, Apple is competing with traditional radio through “Beats 1.” Broadcast live, 24/7, all around the world, it’s Apple’s way of bringing the widest variety of music to listeners in as many places as possible. There are guest presenters, interviews, features, music sessions — indeed, Zane Lowe, poached by Apple from the UK’s BBC Radio 1 to present the L.A. show, has undoubtedly had some input in the direction of Beats 1. Many of the offerings and future plans for the station mimic the music-oriented, ad-free style of the British broadcaster’s radio service.

In use, it’s like any radio station, which is to say that you’ll love some songs, hate others, and tune out during the more forgettable offerings. Of course, the personal nature of being able to tweet in and interact with presenters could make it a more compelling offering than computer-generated radio stations, but its future success remains to be seen. Still, traditional broadcasters would do well to be worried about Beats 1. Apple’s prior successes are proof that the company usually knows exactly what it’s doing.

“Connect,” however, is more of an oddity, “a place where musicians give their fans a closer look at their work, their inspirations and their world. It’s a main line into the heart of music — great stuff straight from the artists.”

One of the first suggestions “Connect” offered was Michael Jackson. Now, call me crazy, but I’m pretty sure the King of Pop won’t be posting “Candid shots from backstage. In-progress lyrics. A rough cut of a new video.” No, instead it’ll be managers, PR agents, and record labels who are interacting with fans. Connect is a way for Apple to drive more sales and streams and the inclusion of deceased artists only cements that fact. What’s more, a post from Madonna was pulled from her Twitter feed, so what you’re getting is second-hand information presented as a unique method of interaction. Thanks, Apple, but I’m good.

You’ll spend a lot of time in menus, and sub menus, and menus within those sub menus, trying to start a playlist or find an individual song.

Navigating the app itself also throws up a number of odd challenges and inconsistencies — though, for the most part, it has a clean, slick aesthetic. A persistent bar remains at the bottom, with your currently playing track featured, as well as the option to share the song or playlist, add the song to a playlist, buy it, or start a randomized radio station. It’s presented in white with red lettering — typical iOS 8. Open up a playlist, or album, or other such tracklist, however, and it’ll adopt the color of the album art. The obvious clash between white controls at the bottom and the main content is hardly the end of the world — it just isn’t the dedication to refinement we’ve come to expect, nay, demand from Apple.

What’s more, you’ll find yourself getting lost or confused in your first few interactions with Music. Because there’s so much on offer, you’ll spend a lot of time in menus, and sub menus, and menus within those sub menus, trying to start a playlist or find an individual song. There’s also a lack of consistency in design elements. Click on a big, square album cover in For You and it’ll open the album, letting you browse tracks. Ditto for playlists — they’ll open, offering further interaction. Click on the same design element in Radio? It’ll instantly start playing. More than once I’d click, thinking I could see further options, only to have the radio station start playing. It’s a bizarrely streamlined process given what’s presented elsewhere.

Still, this is an initial release. Music has plenty of room to grow — and there’s a sizable user base to support it, given it’s now the default app on iPhones. Beats Music users will eventually be ported over to it, as well, while iTunes on desktop now incorporate Music as part of the software (yes, Windows users, it’s still a resource hog). Perhaps more importantly, Apple will offer Music to Android users this fall. If ever there were a clearer statement of intent that the company intends to once again dominate every aspect of the music business, this is it.

So, does Music represent good value? Well, that’s less clear, certainly at the moment. The quality is undoubtedly there — while Apple’s personally curated playlists aren’t necessarily better than Google Play’s auto-generated streams, for instance, the fact that the company is making an effort to personalize the service is appreciated. Apple has also added several great features, such as Siri integration. Ask Apple’s assistant for the most popular song on your date of birth (“Release Me” by Wilson Phillips, in case you were wondering) or the top songs from a particular year, and she’ll oblige.

However, should you already own an Xbox Music Pass (hello, all ten of you!), Google Play Music subscription, Spotify Premium account, or any other such paid subscription, there’s less incentive to jump ship. Spotify, for instance, has been doing this for years. Their app is beautiful, fast, intuitive and makes sharing and finding content a breeze. In addition, for music nuts, Apple Music streams at 256Kbps, versus Spotify’s maximum of 320Kbps. Average users won’t notice a difference, but it’s a difference all the same. As it stands, I personally see no incentive to relinquish my Spotify subscription.

However, in three months time, when the free trial ends and Apple’s $9.99 monthly fee kicks in, it could be a different story. A bit of extra polish, a few UI tweaks, and greater clarity over Connect’s purpose (or its total removal), and Apple could easily convince me to jump ship.