The latest Mission: Impossible is proof that its star is Hollywood's most incredible showman 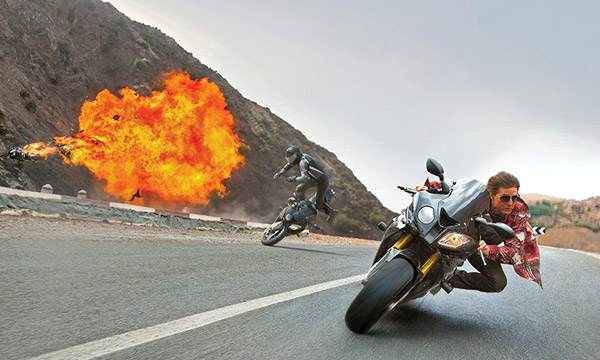 ), the ludicrously punctuated fifth installment of Tom Cruise’s spy series, is built like a shark. The movie opens in the midst of a mission in Belarus, where Ethan Hunt chases down a taxiing cargo plane, climbs onto the side of its fuselage, then holds on for dear life as it takes off into the sky. The movie ends with Hunt sprinting through the streets of London, chased by a madman carrying a gun. It never, ever stops. He never, ever stops.

Somewhere in the middle of Rogue Nation — maybe when Hunt free dives, holding his breath for six minutes, or when he races motorcycles on the outskirts of Casablanca, or when he escapes police custody by rappelling down the roof of the Vienna State Opera — the truth of Tom Cruise’s renaissance act becomes obvious. He’s no longer an actor. His appeal isn’t his charm, though he deploys it cannily, or the manic focus he brings to his roles, which can demand an equal, unattainable commitment from his co-stars. No, he’s a consummate entertainer.

Tom Cruise, at age 53, is Hollywood’s most incredible showman.

Rogue Nation was written and directed by Christopher McQuarrie. Cruise, who has produced every Mission: Impossible movie, hand-picked him. This is the fourth time McQuarrie has written dialogue for a Cruise project — he previously did so with Valkyrie, Jack Reacher, and Edge of Tomorrow — so it’s clear that the two men are simpatico. They work together well. Still, the series is Cruise’s playground, a place where he can retreat to avoid creative risks, while impressing the world with physical ones. 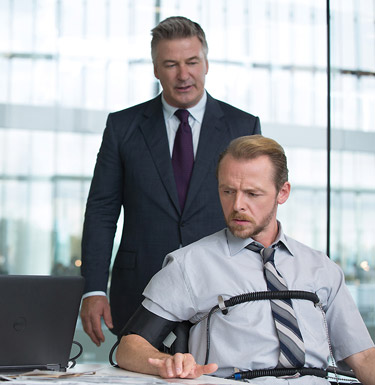 In that regard, Rogue Nation is impressive. Heists blend seamlessly into chases, with a requisite fist fight or two thrown into the mix for flavor. Cruise is game for all of it, rarely seeming long in the tooth, and will presumably undertake even wilder stunts when he makes the next Mission: Impossible movie, then the next, then the next. If there’s a way to make Mission: Impossible – Assisted Living into an action caper, I’m sure a geriatric Cruise will figure it out.

To McQuarrie’s credit, Rogue Nation weaves together its set pieces with a coherent story — it’s plenty irrational, but so is the idea of dangling one of the world’s most famous actors on the side of a plane, so whatever — that introduces new threats to Hunt and the Impossible Mission Force. After the Senate Intelligence Committee votes to shut down the I.M.F., Hunt strikes off on his own to track down Solomon Lane (Sean Harris), the shadowy leader of an “anti-I.M.F.” terrorist group known as The Syndicate. In short order, he recruits the old gang of Benji (Simon Pegg), Luther (Ving Rhames), and Brandt (Jeremy Renner), along with newcomer Ilsa Faust (Rebecca Ferguson), a two-faced Syndicate agent secretly working for MI6.

Unfortunately, the movie strains to make Lane a true foil. Harris is a good actor, but he’s no match for Cruise when it comes to spectacle. He gives Lane a high-pitched voice, spoken in a whisper, as if he’s some kind of discarded James Bond villain. Lane often talks about The Syndicate’s impeccable control of global events, about the inevitability of his master plan. This casts Hunt as a reckless gambler, a risk-taker who succeeds not on merit, but merely due to luck.

Rogue Nation is best when Cruise unleashes his inner mania.

It’s an interesting turn for the series, this idea that the I.M.F. causes more harm than it prevents, and it reflects plenty of anxieties about the role our own intelligence agencies play in shaping the world. By the third act, though, McQuarrie loses that thread. Hunt is right, Lane is wrong, and the I.M.F. can only be a force for good.

Nonetheless, Rogue Nation is best when it leans into those suspicions, when Cruise unleashes his inner mania. In a late scene, after Brandt challenges Hunt’s last-ditch effort to stop the Syndicate, his eyes go wild. “This is how we beat Lane!” he shouts. “This is how we make everything right. Can you see? Can’t you see it?” It seemed like the moment when Hunt would lose it, when his team would double back in fear of what he’d committed to do. He doesn’t, and they don’t. In the world of Mission: Impossible, Tom Cruise is always in control.