Thanks to Alotta McGriddles, vintage clothes shopping has become part of the appeal of Gay/Bash 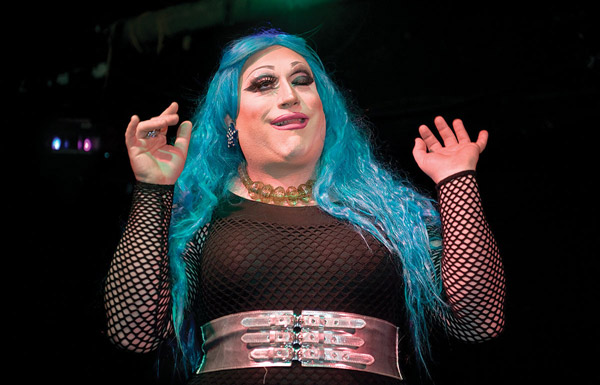 It’s not every night you can shop for clothes in a nightclub. Indeed, it’s such an unusual concept, Joshua Vogelsong wasn’t sure it would work in D.C. He decided to test the waters last fall at his monthly party Gay/Bash at the Black Cat, allowing New York drag performer Alotta McGriddles to bring her “rack of vintage clothing.”

“I think people are still kind of confused by it,” Vogelsong admits. “But every time she comes, anything that’s sparkly or sequined — once those queens get some drinks in them, everybody is buying really cute outfits.”

The outfits and accessories sold as part of the Alotta Stuff Pop-Up aren’t hand-me-downs from McGriddles’s closet. Nor are the men’s items — and there are some — drawn from the closet of the 29-year-old man behind the make-up, Dominic Andolina, who quips, “Obviously not everybody is going to fit in the clothes of a 6-foot 8-inch drag queen.” Instead, roughly 75 percent of the merchandise comes from estate sales, thrift stores and other sources for used attire, places Andolina started hitting when he got his start as a fashion stylist/buyer. More recently he started doing drag, and continues to perform in addition to selling clothes. “All drag queens have A.D.D.,” laughs Vogelsong, “so it’s not like Alotta is going to stand by her clothing rack all night.”

Instead, McGriddles performs as part of the quirky, off-kilter lineup that Vogelsong’s four-year-old party has made its focus in recent years. This Saturday, July 25, the Gay/Bash also features performances by Heidi Glum, Summer Camp, Rumor Millz, Salvadora Dali and Champagne Supernova. Vogelsong will spin punk, indie-rock and other generally alternative tunes, though he now does it in drag under his recently established alter-ego Donna Slash. Also spinning as guest DJ will be Natty Boom, the longtime local DJ and past performer at Gay/Bash as a drag king.

McGriddles’s traveling pop-up, which at Gay/Bash is little more than a rack of clothing set up next to the bar, is an offshoot of the monthly Alotta Stuff!!! Live Auction at Brooklyn’s gay Metropolitan Bar. There, the audience bids on clothes right off the backs of live models. McGriddles intends to start a limited online web site as another source for her wares, but at the moment is focused on a new, more traditional outlet: New York’s celebrated clothing store Patricia Field, which just last week announced it will start featuring Alotta’s goods in its vintage section.

But McGriddles assures club-goers in New York and D.C. that they will continue to get first dibs. “All of my clothing will still hit my rack before it goes to Patricia Field.” — Doug Rule