"This has been a heroic battle," Vice President Biden said. 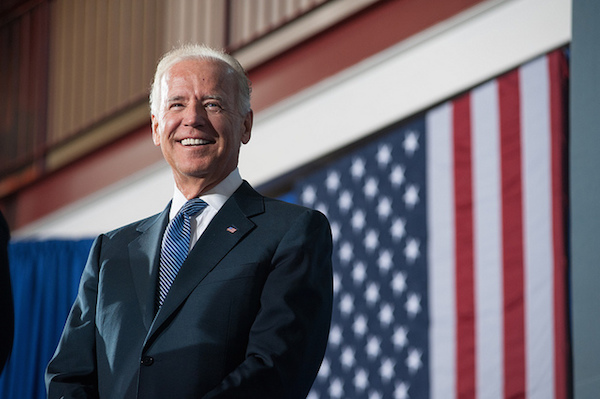 Calling the fight for marriage “the civil rights movement of our generation,” Biden compared last month’s historic Supreme Court ruling Brown v. Board of Education, which ruled segregation in schools to be unconstitutional. “This decision is as consequential as Brown vs. the Board,” he said. “And it’s always been — the reason I’ve been so confident, it’s always been a simple proposition.”

Frequently interrupted by applause, Biden praised those who fought so hard for marriage. “Pursuing this simple proposition for many of you standing in front of me took courage,” he told the crowd. “It took moral courage, but it took physical courage…. As you came out and stood up and made your case, unlike me, you risked a great deal.”

The Vice President also mentioned his father, who helped shape his views on civil rights and equality. While 17, he witnessed two men kissing before they went to their respective jobs. “Joey, they love each other,” his father responded. “It’s simple.”

“That’s what this has been all about from the beginning,” Biden added. “It’s never been that complicated for me because of the parents who raised me.”

“The last five or six years where I go within the community I’m being thanked,” he said. “you don’t owe me or Valerie [Jarrett, Senior Adviser to the President] or the President or anybody any thanks. No, no, no, you don’t. We owe you.”

“I want you younger people here to understand the shoulders you’re standing on,” Biden continued. “Your courageous efforts not only set you free and the LGBT community free, but it freed millions and millions of straight women and men.”

He also looked to the future of the equality fight, including helping those around the world who struggle under the rule of homophobic regimes.

“Along with marriage equality, it matters that we use the power of our example…as a force for global human rights, to be a champion of LGBT rights around the world,” Biden said. “This also has a significant foreign policy dimension. Finally…our actions are matching our stated values.”

Rhuaridh Marr is Metro Weekly's online editor. He can be reached at rmarr@metroweekly.com.
← Previous Story Kansas will protect religious groups from same-sex marriage
Next Story → Mike Huckabee: “Extreme Court” has turned us into Sodom and Gomorrah