Home / Nightlife / Clublife / Keep the Lights On: Art After Dark at AMA

Keep the Lights On: Art After Dark at AMA 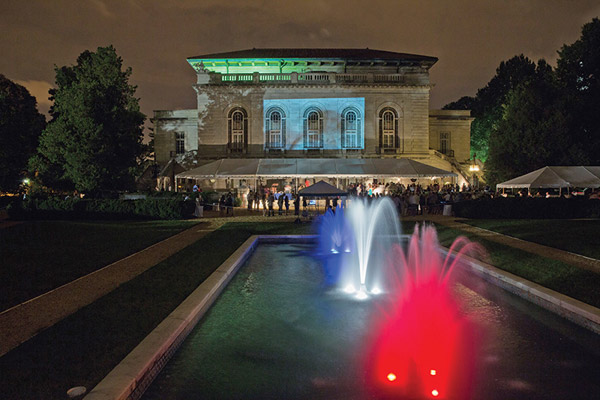 Art After Dark at Art Museum of the Americas

Usually a day at the museum is just that — a day. As night draws in, the lights dim on those pristine white hallways, delicately curated with art, and the museum closes. But once a year, when the sun sets on the District, one museum keeps their lights on. The Art Museum of the Americas illuminates the French gardens of the Organization of American States for Art After Dark, a night of glitz and giving.

“It’s almost like a Great Gatsby party,” says Andrés Navia, Director of the AMA. “It’s all very lively, very glamorous.” Now in its sixth year, Art After Dark — one of AMA’s only fundraisers — continues to dazzle D.C. denizens with a show that combines fashion, multimedia, music, and movement.

Just like one of Gatsby’s soirées, partygoers are dressed to the nines. “People really dress up for this,” Navia says. “It’s a real performance for people.” This year, local DJ Kelton Higgins will keep the music pumping while revelers dance around the outdoor reflecting pool. And later in the night, you can expect to hear Matias Aguayo‘s unique vocal and electronic performance inspired by his Chilean and German heritage.

In the middle of the lush gardens stands the museum itself, where video installations will be projected throughout the evening, combining art past and present. “We have all sorts of art from all levels,” Navia says. “We really try to take what we have from across the Americas and put it together for this event.”

And it’s that simultaneous expression of culture that makes Art After Dark such a powerful event. As part of the Organization of American States, the AMA works hard to bring to light the cultures and experiences of peoples all over the Americas. The idea is most present in the work of Canadian artist Dominique Paul, whose fashion installations will be on display in the gardens. Her piece, America’s Folly, consists of themed dresses that highlight the rising inequality and environmental concerns that come with over-consumption of natural resources and lack of civic awareness. “With Art After Dark, we want to promote more rights for more people,” says Navia. “And to that we add more art for more people.”