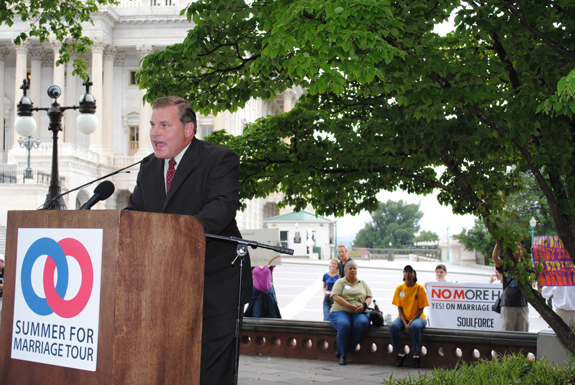 The National Organization for Marriage (NOM) finally — and under protest — waved the white flag of surrender on Monday by releasing the names of seven donors who contributed $2 million to Maine’s 2009 referendum on same-sex marriage.

According to the campaign finance report filed by NOM, only one of the seven donors was from Maine, and most had previously donated to conservative or anti-LGBT initiatives. The donors contributed to NOM, which then funneled the money to Stand for Marriage Maine, the organization dedicated to overturning Maine’s same-sex marriage law before it was slated to go into effect.

Monday’s release of the report ends years of back-and-forth arguments over whether NOM had violated Maine’s election laws, and whether the organization had a justification for keeping donors’ identities a secret. According to the Portland Press-Herald, NOM shouldered nearly two-thirds of the total cost of the 2009 referendum campaign, which successfully overturned the marriage equality law. Three years later, the voters of Maine reversed that stance, legalizing marriage equality in a similar referendum.

The Maine Commission on Governmental Ethics and Election Practices compiled a report on the controversy, noting that, in addition to providing the bulk of funding for the referendum, Brian Brown, the executive director of NOM, was one of three individuals on the executive committee of Stand for Marriage Maine.

“In spite of NOM’s primary role in funding the pro-referendum campaign, NOM did not register of file financial reports with the Ethics Commission as a ballot question committee,” in accordance with state election law, the commission wrote in its report. “Accordingly, it did not publicly report its donors or any expenditures it made to influence the referendum (other than by contributions to Stand for Marriage Maine), and did not fulfill other key obligations of ballot question committees, such as disclosing officers and decision-makers and certifying that its financial reports were complete.”

The initial complaint against NOM was lodged by openly gay activist from California and former Republican presidential candidate Fred Karger in 2009. In response, NOM had claimed it did not have to register as a ballot question committee because the money had come from NOM’s general treasury, and had not been earmarked for the Stand for Marriage Maine campaign. After years of litigation, the commission issued a final report in 2014 finding that NOM should have registered as a ballot question committee and fining the organization $50,250. According to the Press-Herald, that amount is nearly twice the largest previous ethics penalty assessed against any political action committee. The commission’s decision was upheld in April by a Maine Superior Court ruling.

Three weeks ago, NOM suffered its final setback after the Maine Supreme Judicial Court refused a request to delay complying with the commission’s ruling that it must file a report identifying its donors. NOM had previously argued that revealing their identities would subject them to personal attacks and harassment by LGBT rights activists, adding that opening them up to such attacks would intimidate, and suppress the free speech rights of, people opposed to same-sex marriage.

“The National Organization for Marriage (NOM) not only knowingly broke the law, but stonewalled a state investigation for six years — wasting taxpayer money,” said Stephen Peters, a spokesman for the Human Rights Campaign. “What they were hiding is what we knew all along — NOM is a sham organization made up of a handful of donors. It’s astonishing that these donors — including only one from inside the state — wasted such large amounts of money trying to take Maine backwards in its journey towards equality for LGBT people.”

Meanwhile, State Rep. Ryan Fecteau (D-Biddeford), one of nine openly gay House members and an alumnus of The Catholic University of America in Washington, says he is pleased to see Maine’s electoral laws upheld.

“I’m definitely happy that they finally decided to comply with the law,” says Fecteau. “The information is now public, and people will now be able to see who backed NOM, and who essentially backed intolerance. It’s a good day for transparency, that’s for sure.”

Fecteau also marvels at how quickly attitudes towards LGBT rights have shifted in the mere six years from the 2009 campaign, when NOM enjoyed the advantage.

“That 2009 campaign is so far in the past,” he says. “It’s kind of amazing that these folks spent all this money on a cause they felt passionate about, and six years later, marriage equality is now the reality in every state.”