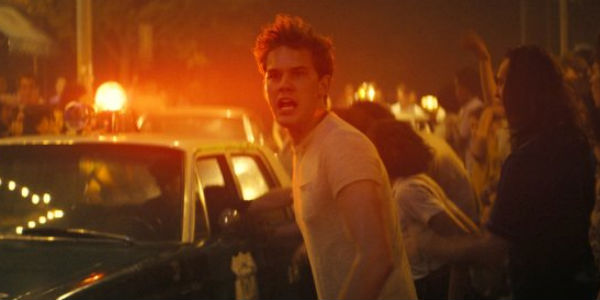 It’s not even in theaters, but already the movie Stonewall finds itself the target of a boycott by LGBT activists for allegedly “white-washing” the contributions of LGBT people of color — in particular transgender women of color.  Activists have started two online petitions, one through MoveOn.org that has garnered 353 signatures, and another, through the Gay-Straight Alliance Network, which has collected over 15,000 signatures, calling for moviegoers to boycott the film.

“As queer/LGBT people of color and our allies, we are BOYCOTTING Roland Emmerich’s Stonewall movie for erasing the contributions of of-color queer and gender non-comforming activists,” the MoveOn petition reads. “Hollywood has a long history of white-washing and crafting White Savior narratives, but this is one step too far. A historically accurate film about the Stonewall Riots would center the stories of queer and gender-noncomforming people of color like Sylvia Rivera and Marsha P. Johnson. Not relegate them to background characters in the service of a white cis-male fictional protagonist.”

The GSA Network petition reads as a letter “to all considering watching the newest whitewashed version of queer history.”

“It is time that black and brown transwomyn and drag queens are recognized for their efforts in the riots throughout the nation,” the petition reads. “From the preview alone, we know that will not be happening. Majority of characters casted are white actors, cis men play the role of transwomyn, and folks who began the riots do not seem to be credited with such revolutionary acts.

“We are calling for a Boycott of Stonewall. Do not throw money at the capitalistic industry that fails to recognize true s/heros (sic),” the petition continues. “Do not support a film that erases our history. Do not watch Stonewall. Tell your own history! Use social media to recall what you know to be true of Stonewall. Film your own short films. Make videos, write poems, sing songs. Continue to teach true history.”

The GSA petition also encourages people wishing to protest the film to use the Twitter hashtags #BoycottStonewallMovie and #NotOurStonewall when talking about it on social media, saying “Our history will not be white/cis-washed.” The petition’s author, Pat Cordova-Goff, also posted a video to YouTube explaining why she started it. In the video, Cordova-Goff also references her dislike of the film’s casting, using cisgender male actors to portray transgender women.

In the recently released trailer for the film, the main character leading the fight appears to be a young white man called Danny, played by Jeremy Irvine. Activists point out that, at the time of the police raid that led to the eventual Stonewall riot, the Stonewall Inn was a popular hangout for LGBT people of all races and gender identities.

According to The Guardian, Ronald Emmerich, the openly gay director of Stonewall, previously told Vulture that the film has representations of drag queens, lesbians and other LGBT identities with the intent of providing a more diverse portrayal of the community. Emmerich has since addressed the controversy on his Facebook page, writing: “I understand that following the release of our trailer there have been initial concerns about how [the character of Danny’s] involvement is portrayed, but when this film — which is truly a labor of love for me — finally comes to theaters, audiences will see that it deeply honors the real-life activists who were there.”

Both Irvine and the film’s co-screenwriter, Jon Robin Baitz, also took to Facebook to defend the movie, arguing that it’s much more diverse than the trailer leads people to believe.

“[I] can assure you that [Stonewall] represents almost every race and section of society that was so fundamental to one of the most important civil rights movements in living history,” Irvine wrote. “Marsha P. Johnson is a major part of the movie, and although first hand accounts of who threw the first brick in the riots vary wildly, it is a fictional black transvestite (sic) character played by the very talented @vlad_alexis [actor Vladimir Alexis] who pulls out the first brick in the riot scenes.”

John Riley is the local news reporter for Metro Weekly. He can be reached at jriley@metroweekly.com
← Previous Story Creative Blocks: “The End of the Tour” and “Ricki and the Flash”
Next Story → Larry Kramer responds to “Stonewall” movie boycotters