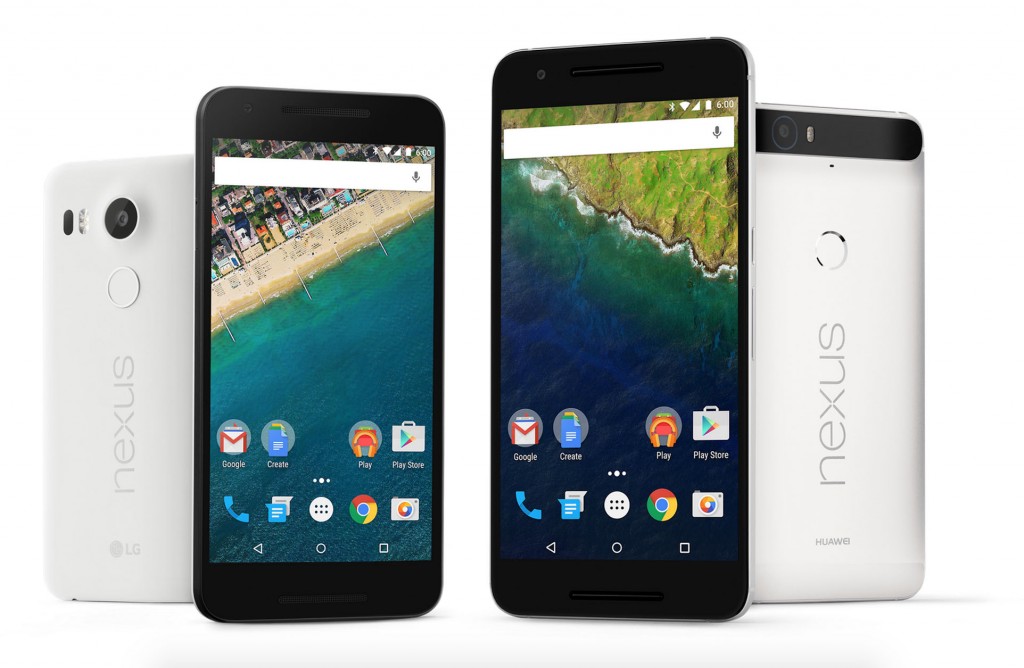 Once or twice a year, Google reminds us that it’s much more than just a software company. Sure, they power your cute kitten image searches, your document editing software, or your video sharing platform, but Google also regularly dips its toes into the physical world — and perhaps nowhere is this better exemplified than with its Nexus smartphone program.

An annual event for Android geeks everywhere, Nexus is a response to the bevy of manufacturers who insist on cluttering Google’s highly polished smartphone OS with gaudy additions and needless features (here’s looking at you, Samsung). Google pairs with a smartphone maker to produce what it feels should epitomize Android for the next twelve months. The Nexus program has birthed some pretty incredible devices, from the experimental Nexus One to the remarkably affordable Nexus 5.

Last year, however, Google irked as many as they awed. Teaming with Motorola, the Nexus 6 was born. It was big, battery hungry, and — in comparison to its predecessor — expensive. Google aimed for flagship status, but alienated a lot of consumers in the process.

Eager to appease its fans, this year Google is treating us to two Nexus devices. One is affordable, attractive and reasonably-sized. The other is still surprisingly affordable, phablet-sized and packing flagship specs. It’s a bold strategy, but whether it pays off will be determined in about a month — that’s when Google’s new phones are expected to reach customer hands.

Let’s start with the smaller of the two. The Nexus 5X is a clear successor to 2013’s Nexus 5, which was hailed at the time for packing powerful internals in a simple, elegant and seriously inexpensive shell. Google obviously liked what LG brought to the table last time around, so the Korean company returns again to craft the 5X. This time, though, the 5X is much more of a midrange device than the 5 was

In keeping with its nomenclature, the 5X sports a 5.2-inch display — it’s a 1080p LCD effort, which should be pretty great if LG’s previous smartphone displays are anything to go by. Under the hood beats Qualcomm’s Snapdragon 808 CPU, a six-core chip that emphasizes longevity over raw power. It’s mated to 2GB of RAM and a 2,700 mAh battery — a powerhouse of productivity this isn’t, but that’s not the point. The Nexus 5X is a device for those who don’t care about specs, who only need their favorite apps and games to work without bogging down. For that, the 5X is perfect. It’s just a shame, then, that Google chose to restrict it to 16 or 32GB of storage with no MicroSD slot. Even midrange users can easily fill up a modern smartphone with music and photos. 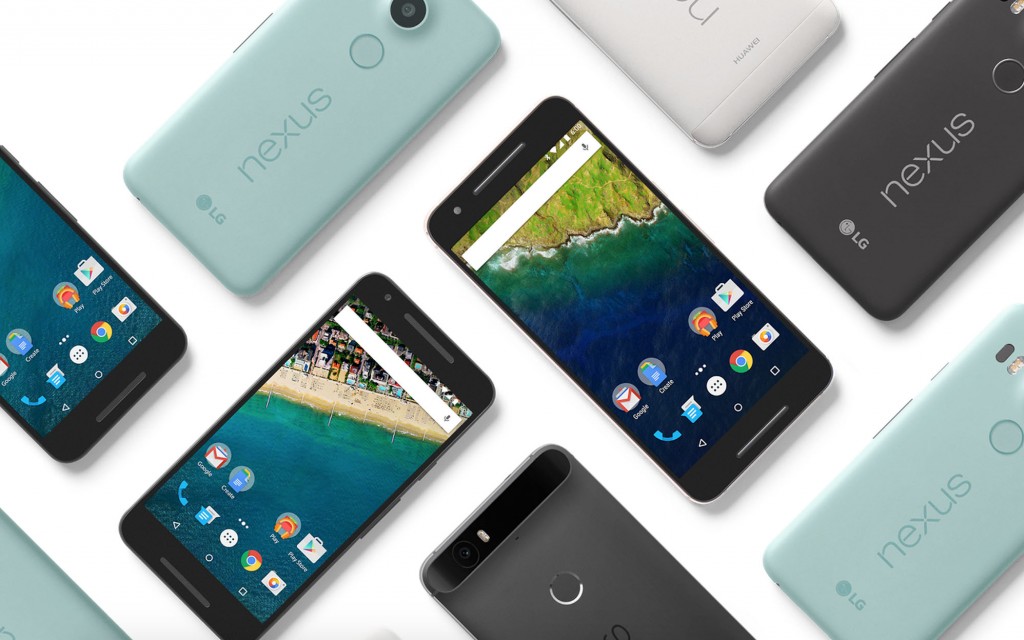 Where Google and LG didn’t skimp on was the camera, usability and security features. The main camera is a 12.3-megapixel effort whose pixels have been stretched to let in more light. There’s laser-assisted autofocus and a dual flash, as well as 4K video. The 5X may not be expensive, but its camera is certainly impressive. Wrapped inside its polycarbonate body is Google’s new Sensor Hub chip, which mimics Apple’s motion coprocessors in detecting a wide range of activities such as whether you’re walking or cycling, or if you’ve picked the phone up and want to check notifications. On the back of the Nexus 5X is a rather prominent fingerprint sensor — dubbed Nexus Imprint. Google promises unlock times in under one seconds and a recognition system that learns your print to improve response times. It’ll pair perfectly with Android Pay, Google’s contactless payment platform. Fast charging is onboard — something every smartphone should have, so incredible is its capabilities — aided by a USB Type-C cable. Yes, gone is micro USB, in comes the newer, faster, reversible connector.

Google touts the Nexus 5X as an “all-round champ.” As such, its pricing is generously low, given the high quality of LG’s construction and its relatively accomplished specs. It’s available to preorder now directly from Google (shipping times estimate 3 to 4 weeks) for just $379. It’ll come unlocked and work on every major carrier and is available in white, black, and an adorable mint color Google calls “Ice.”

However, the 5X won’t be the device that cannibalizes column inches. That honor will fall to the Nexus 6P. Google has taken criticism over last year’s Nexus 6, abandoned Motorola, and headed to China for the 6P. Yes, Google’s flagship was designed in conjunction with Huawei — a company that once threatened to withdraw from the U.S. market after it was repeatedly accused of spying for the Chinese government. Minor international relations issues aside, it’s telling that Google tapped Huawei for the 6P. First is that Huawei has massive name-recognition in China, a market Google eagerly wishes to penetrate. Second is that, apparently, only Huawei and a handful of other manufacturers could mass-produce the aluminum 6P in the quantities Google required. Oh, and it’s pronounced “wah-way,” in case you’re wondering.

What about the actual device, though? Well, it’s interesting, that’s for sure. It’s svelte, with chamfered edges and a wafer-thin waist — just 0.29 inches deep — while weighing in at a mere 6.28 ounces (the iPhone 6S Plus is an identical depth and a comparatively obese 6.77 ounces). It’s available in three shades, Aluminum (silver), Graphite (black) and Frost (white), while the body is machined from aviation-grade aluminum. That’s great and all, but can we talk about that bar on the back? Yes, to circumvent the signal issues that can occur in all-metal devices, Huawei and Google decided the best solution was a large black glass bar along the top of the rear. It’s an interesting device choice, sure, but is it attractive? We’ll leave that up to you, but personally I’m not convinced. 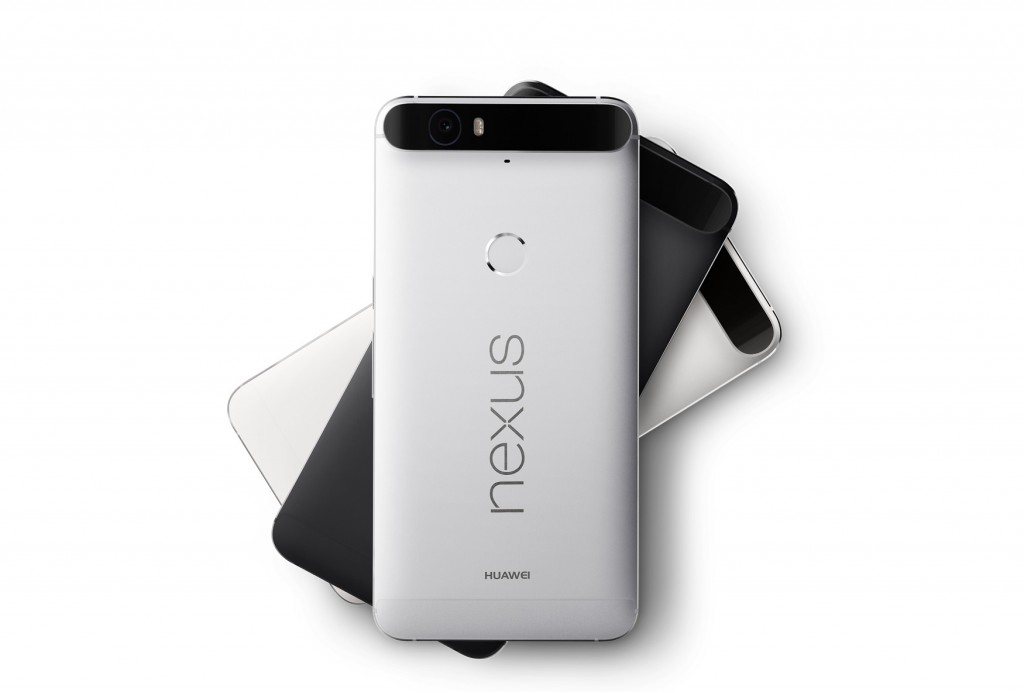 Under that bar, you’ll find the same 12.3-megapixel camera as the 5X with its 1.55µm pixels, as well as 240fps slow motion video. Up front there’s an 8-megapixel camera, which should keep selfie fans happy. The 6P packs a large, 3,450 mAh battery — that’s more than the 6S Plus, the Galaxy Note 5 and the Moto X Pure Edition. It’s also more than last year’s Nexus 6, despite the 6P being significantly thinner and lighter. It’s powered by the second generation of Qualcomm’s Snapdragon 810 chip, which brings eight cores of power and hopefully no more overheating and battery draining mishaps. It’s paired with 3GB of RAM and either 32, 64 or 128GB of storage and also has Google’s Sensor Hub chip.

Up front, the 6P packs a Quad HD (2,560×1,440) AMOLED display. That makes for a Retina-display crushing 518 pixels-per-inch, while the AMOLED tech should provide great colors and endless blacks. The 6P also packs in a Nexus Imprint fingerprint scanner on the rear, as well as USB Type-C with turbocharging. As an added bonus, there’s stereo speakers flanking the display — the Nexus 6P should be a great gaming and movie-watching device

Perhaps most surprising is that, despite packing a more premium body than last year’s Nexus 6, Google hasn’t caved to greed and charged the same price. The $649 price of last year’s model raised more than a few eyebrows. The 6P? It’ll retail at just $499, unlocked and contract free. Given that the iPhone 6S Plus starts at $749 off contract, it’s a stunning bargain. Naturally, it’ll work on every major carrier and it’s available to preorder from Google now — it’ll take 4 to 5 weeks to arrive, though.

Both the Nexus 6P and 5X will be launch devices for Android 6.0 Marshmallow, the latest version of Android. It’s mostly a usability update, offering battery life improvements through a new deep sleep function, faster homescreen and search usage, a system-wide feature called Now On Tap which lets users call up contextual searches based on what’s on screen at that moment, as well as enhanced voice controls that allow Google to open and control third party apps — ask your Nexus 6P to open Spotify and play a certain song and it’ll happily oblige. Marshmallow will make its way to the Nexus 5, 6, 7, 9 and Player starting next week. 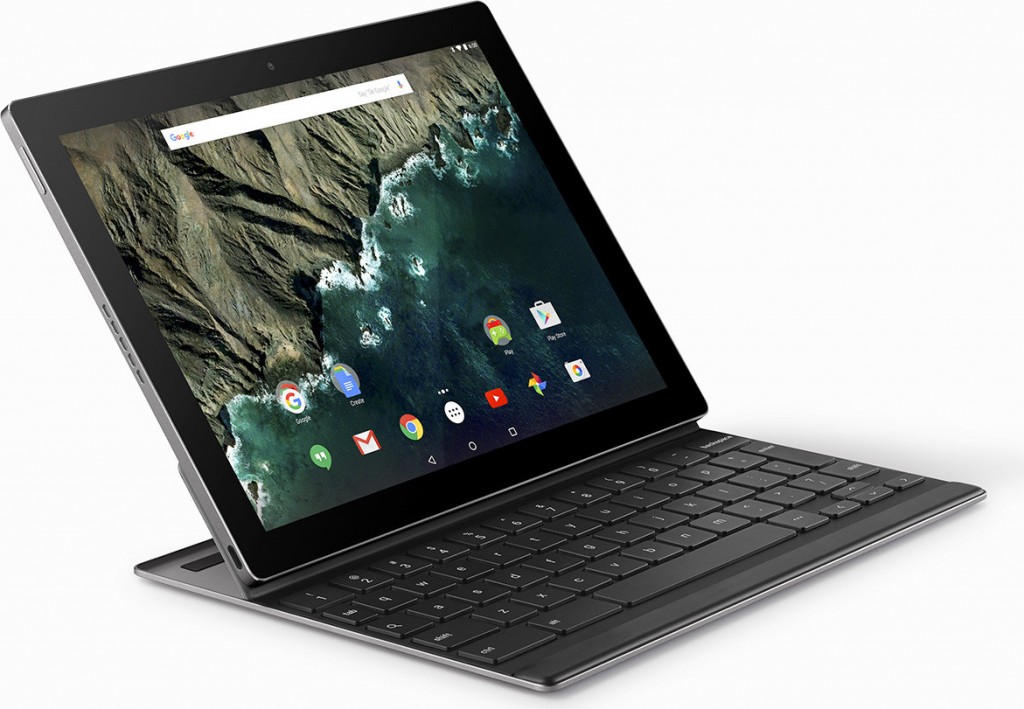 Google wasn’t done there. In addition to two new smartphones, they also announced the Pixel C. It’s Google’s response to the Microsoft Surface and iPad Pro, offering a tablet and keyboard combo for those in the Android ecosystem. It’s a slim, elegant device, hewn from anodized aluminum and a mere 0.27-inches deep. Its 10.2-inch display is unusual, but it was deliberate — the Pixel C mimics A4 paper when held. Its display is 2,560×1,800 and cranks up to 500 nits of brightness. There’s a NVIDIA Tegra X1 processor inside alongside 3GB of RAM and it’ll run Android 6.0. All-in-all, it’s a rather gorgeous device.

Most impressive is Google’s optional keyboard dock. It connects to the Pixel C via magnets, snapping into place when you drop the tablet in. They’re strong enough that the keyboard can be turned upside down without the tablet falling off. The hinge also allows the Pixel C to be adjusted from flat to almost 90 degrees. For those who demand productivity without the expense of a laptop — or even Microsoft and Apple’s solutions — the Pixel C could be a fast, powerful tool. Even better is that it’ll retail for just $499 for 32GB of storage. That fancy keyboard dock will add another $149 to the price, which makes the Pixel C a little less palatable, but you can judge for yourself when it launches this holiday season.