By John Riley on September 1, 2015 @JohnAndresRiley 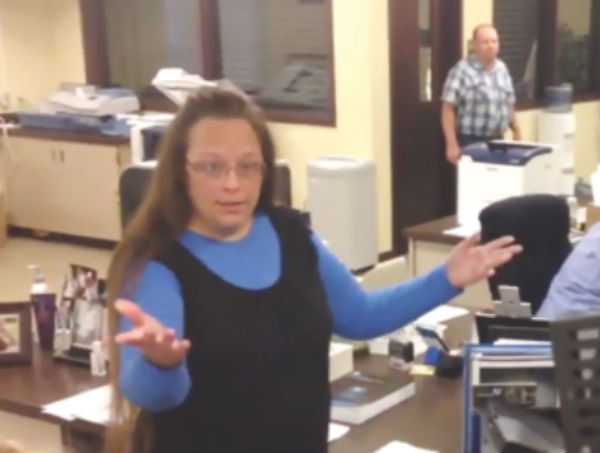 The ACLU of Kentucky on Tuesday filed motions with U.S. District Judge David Bunning seeking to hold Rowan County (Ky.) Clerk Kim Davis in contempt of court for refusing to issue marriage licenses based on her personal opposition to same-sex marriage.

In defiance of a federal court ruling ordering her office to begin issuing licenses to qualified couples, and subsequent rejections of an emergency stay by the 6th U.S. Circuit Court of Appeals and the U.S. Supreme Court, Davis said she would not be issuing marriage licenses “under God’s authority” to David Moore and David Ermold or to April Miller and Karen Roberts. Miller and Roberts are among the four couples — two gay and two straight — who initially sued Davis for her refusal to issue any licenses to any couple, regardless of sexual orientation.

If found in contempt of court, Davis could be fined and face jail time. Some LGBT activists fear that Davis, her lawyers and anti-gay activists will make her a conservative martyr, using any jail sentence to argue that Christians will be imprisoned if LGBT rights are further expanded. Davis has already become the celebrity du jour of the conservative anti-LGBT movement, with supporters arguing she is acting under the authority of a power higher than that of the Supreme Court.

Davis’ opposition is based on her Apostolic Christian beliefs that marriage is reserved as the union of one man and one woman. Fearful of running afoul of the Supreme Court ruling, Davis declared her office would no longer issue marriage licenses point blank, instead directing applicants to a nearby county that would issue licenses. She then went a step further, claiming that, because her name appears on the marriage license as the official county clerk, she cannot allow any licesnses to be granted in the county, even if she does not physically issue them herself.

According to the Associated Press, when Davis announced that she would not budge on the issue, supporters in the room cried out, “Praise the Lord!” and called on her to “Stand your ground!” Meanwhile, supporters of marriage equality yelled, “Do your job!” Sheriff’s deputies later cleared the room of all protesters, pushing them outside the courthouse, where the dueling sides kept chanting and yelling at one another.

Davis asked Moore and Ermold to leave, with Ermold responding, “We’re not leaving until we have a license.”

“Then you’re going to have a long day,” Davis replied.

Being held in contempt isn’t Davis’ only concern: she might face a more serious charge that could carry its own separate sentence. According to The Morehead News, last Thursday the Rowan County Attorney’s Office referred a charge against Davis to the Kentucky Attorney General’s Office. Because Davis is an elected official, she can only be forcibly removed from office by the state government if found guilty of “official misconduct,” the term for when a public servant either oversteps their authority or refuses to perform the duties required of their office.

If found guilty, Davis could face an additional prison term of up to a year and a fine of $500.

Yet another headache for Davis is pro-marriage equality protesters, who have continually demonstrated outside of her office, with some, like Moore and Ermold, coming back every day to try and obtain marriage licenses. Ahead of a pro-equality protest on Saturday, Davis closed the clerk’s office, which is scheduled to be open for a half-day on the last Saturday of every month.

Camryn and Lexie Colen, one of the couples attending Saturday’s protest, obtained a marriage license from Davis in February even though Camryn is a transgender man. The couple says they did not inform Davis of Camryn’s gender identity. LGBT advocates have pointed to Davis’ issuance of the Colens’ marriage license, as well as her own multiple marriages and divorces, as evidence of her hypocrisy.

“She just saw a straight couple in love,” Camryn Colen said when recalling his encounter with Davis. “She should see everybody like that.”