Home / Arts + Entertainment / Film / Take a Hike: A Walk in the Woods (review)

Take a Hike: A Walk in the Woods (review) 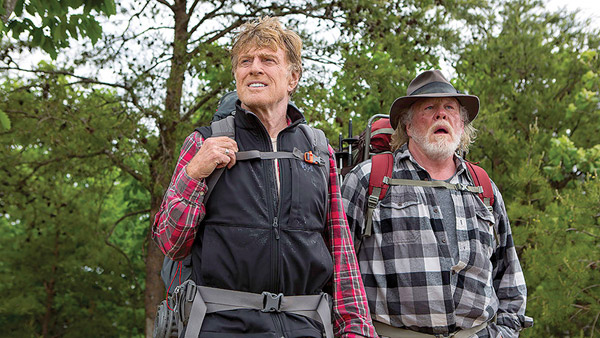 A Walk in the Woods, the best-selling travel memoir written by Bill Bryson, is legendary. In it, Bryson recounts his attempts to hike the 2,220-mile Appalachian Trail with Stephen Katz, an old friend recovering from alcoholism. The book is funny in the way Bryson’s books are always funny — it’s pleasant and curious and sprinkled with just enough childish humor to bring the phrase “young at heart” to mind.

This movie is none of those things.

) to a collection of dull slapstick gags and reprehensible womanizing. The basic premise is essentially unchanged, but Kwapis is missing some crucial alchemy, whatever catalyzing agent Bryson captured to transform his book’s most immature moments into charming wisecracks.

Redford and Nolte make a great pair on-screen but they’re acting in service of bad jokes.

The movie does change one significant detail: Bryson (Redford) is aged several decades. He’s not the middle-aged man he was in the book; now, he’s a semi-retired grandfather, flitting through the back end of his career without a new book to his name in years. After he and his wife, Catherine (Emma Thompson), attend a friend’s funeral, Bryson stumbles into a late-life crisis. He decides to hike the Appalachian Trail, from Georgia to Maine, in part because he’s advised to “slow down” in his old age. “It’s just something I have to do,” he tells Catherine, while failing to hitch a tent in their backyard. He’s not woefully unprepared, but, uh, whoa. Maybe he should slow down a little bit.

After promising Catherine that he won’t do the hike alone — and after he fails to recruit any of his buddies — Bryson gets a call from Stephen Katz (Nick Nolte), an old travel companion, who caught wind of his plans and wants to join for one last adventure. (“Spent half of my life getting drunk and chasing pussy,” Katz later tells Bryson. “The other half I wasted!”) They ship off for Georgia, hiking packs in tow, and the long walk begins.

A Walk in the Woods fades as the duo hits the trail, in no small part because it indulges comedic impulses that rarely pay off. The movie is rife for a thoughtful sort of travel humor — it’s easy to imagine a version inspired by Alexander Payne’s Nebraska — which makes it all the stranger to see Kwapis stick with this lame, buddy-comedy schtick. Bryson is trim, clean, and educated! Katz is fat, sloppy, and ignorant! Can you guess what happens when they spend months together in the middle of the woods? I bet you can.

Redford and Nolte make a great pair on-screen, of course, but they’re acting in service of bad jokes. The funniest thing about them is they way they speak: One enunciates every vowel of every line, while the other croaks like a diseased frog. It’s very entertaining, and both play it up wall. Pay attention to the sounds they make, though, not the words they are saying. Their lines will only insult, especially when they are talking about women.

A Walk in the Woods veers toward the ugly and nasty in bizarre ways whenever Bryson and Katz trade stories about their love lives. Their repartee isn’t offensive on its own — this is a movie about two straight guys hiking to reclaim a shadow of their youthful ways, so it’d be surprising if they didn’t boast about their sex lives — but, all too often, the punchlines hit the wrong targets. Like when Katz tells Bryson about a woman he flirted with in a laundromat, who had “a beautiful body — buried under 200 pounds of fat.” Or later, on the trail, when they reminisce about a beautiful woman they met in Europe named Amarina. She was beautiful; her unnamed sister was not. They laugh, joking that when a woman doesn’t have looks, a sense of humor, or a lot of money, she “better be slutty.”

These one-liners don’t belong in this movie. If Kwapis wanted to stick to the spirit of Bryson’s book, which can certainly raise eyebrows with its own brand of womanizing, he could’ve done so without stooping to tired gags about body size and sex. It’s one thing to depict these less-than-virtuous characters. It’s another entirely to endorse their banter.

In the final act of A Walk in the Woods, Bryson and Katz tumble off-trail. They’re trapped on a narrow ridge in a cliff, with no means of escape. They worry they may die before they’re found. Bryson tries to write a note to his wife, tries to tell her how much he loves her, but he only gets as far as “Dearest Katherine.” He can’t finish. Later, after they’re saved by a pair of young hikers — when they’re back in the modern world — Katz asks him why. “Certain things you just can’t put into words,” he says. Or movies, evidently.

A Walk in the Woods is rated R and runs 104 minutes. Now playing in area theaters.

A Walk in the Woods