By John Riley on September 9, 2015 @JohnAndresRiley 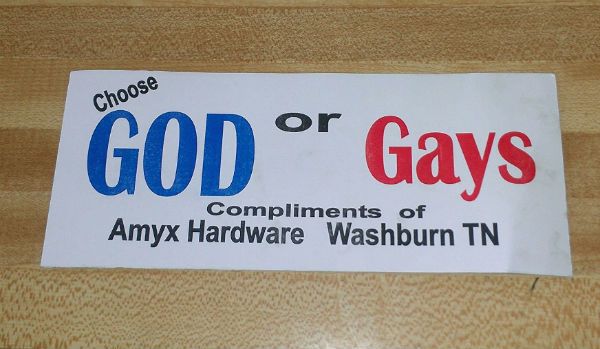 Perhaps it’s part of a backlash against advances for LGBT rights. Or maybe it’s just a sentiment that has never changed in a socially conservative part of Eastern Tennessee. But whatever the reason, Jeff Amyx’s hardware store is experiencing a run on anti-gay merchandise.

Amyx, who owns Amyx Hardware in Washburn, Grainger County, Tenn., told local Knoxville-area ANC affiliate WATE that he has sold out of hats and bumper stickers that read: “No Gays Allowed” or “Choose God or Gays.” Amyx previously attracted attention in July for placing signs in his window that read: “No Gays Allowed” and “We reserve the right to refuse service to anyone who would violate our rights of freedom of speech & freedom of religion.”

Although Amyx claims to have received “bundles” of hate mail for posting the “No Gays Allowed” sign, he says that business has actually increased since he took a public stance. Due to customer requests, he began selling the hats and bumper stickers, which sold out this week. He says he’s ordering more, and may begin selling shirts bearing the same messages. Amyx claims he is not making a profit off of the merchandise, offering it at cost to anyone who is interested as a way of making a statement about his personal religious beliefs.

“God created Adam and Eve, not Adam and Steve,” Amyx told WATE. “I just don’t agree with their lifestyle. I don’t want any part of it, I don’t want it around me, and I’ll never agree with it.”

Outside his store is a white board with a message asking people who agree with his stance to sign their names as a show of support. The board has over 300 signatures on it.

The Tennessee Equality Project, which boasts more than 140 LGBT-supportive businesses across the Volunteer State as part of its “Tennessee Open for Business” program, responded to Amyx’s announcement, calling his actions “hurtful.”

“The fact that he is selling merchandise that is saying ‘choose God or Gays, it doesn’t really help those who are Christian and identify as LGBT, such as myself,” said Gwen Schablik of the Tennessee Equality Project. “I am a social justice deacon for my church, Church of the Savior. There’s numerous churches in this area that are accepting to everybody.”

John Riley is the local news reporter for Metro Weekly. He can be reached at jriley@metroweekly.com
← Previous Story Kim Davis to return to work Friday or Monday
Next Story → Legalizing Sex Work: A Rentboy.com escort on why legalization matters