Ridley Scott's "The Martian" lacks the propulsion to make it stellar

By Randy Shulman on October 1, 2015 @RandyShulman

). It’s a perfectly beige affair, ironic given it’s set on a red planet.

The movie is saved, somewhat, by Matt Damon’s light, lithe lead performance as Mark Watney, an astronaut stranded on Mars after his departing fellow crewmates assume him dead. Luckily, Mark has at his disposal a fully-pressurized scientific habitat in which to fritter about. Of course, with even a glimpse of rescue four years away — expressed in the movie using the Martian years, SOLs (which conveniently also stands for “Shit Out of Luck”) — Mark must find a way to survive 50,000,000 miles from home. NASA might have found evidence of water on Mars, but they’ve yet to locate a 7/11.

“Luckily, I’m a botanist,” Mark chirps to his GoPro camera video log. “Mars will come to fear my botany powers!… I’m going to have to science the shit out of this.” And that’s exactly what he does, using his personal waste to fertilize a big old crop of potatoes.

Ever the problem-solver, Mark finds a way to communicate with NASA, letting them know he’s alive and well and ready to end his Martian holiday. Meanwhile, he spends his days taking in the planet’s rugged scenery like a professional tourist. “Everywhere I go, I’m the first,” he says. “Four and a half billion years, nobody was here and now, me.” Mark’s placid demeanor even carries through to extreme circumstances. The film is less about the sheer will to survive and more about how to survive through focused, methodical problem solving. To put it another way, it’s like watching algebra spring to life.

Based on a popular novel by Andy Weir, The Martian is an oddity for Scott, a director not known for lighthearted space narratives. Yes, there are occasional perils — a crack in a helmet is cause for both intense panic and deep admiration for the adhesive, oxygen preserving powers of duct tape — but there are no major discoveries, no battles with acid-blooded aliens, not too much of anything. Mark just waits to be rescued, stuck with some old Happy Days episodes and an assortment of ’70s disco music.

The other half of the movie is about achieving Mark’s rescue, and while I’m not one to toss out a spoiler, it’s pretty darn evident from the start that every option NASA attempts will fail until the only alternative left lies with the homeward bound crew of the Ares III. The Martian is the kind of predictable movie where the head of NASA, played with stone-faced resolve by Jeff Daniels, says “He’ll have just enough food assuming nothing goes wrong,” and in the very next scene something on Mars goes disastrously wrong.

The beauty of Gravity, which The Martian aspires to be a cousin to, is that you never quite knew whether or not Sandra Bullock’s character would survive its taut, tense 90 minutes. The Martian, on the other hand, serves up an obese 141 minutes, and while it’s climax is stunningly executed by Scott, there’s no edge-of-your seat thrill. You just settle back and casually wait for the inevitable.

The Martian is rated PG-13 for mild profanity. Opens Friday at area theaters. 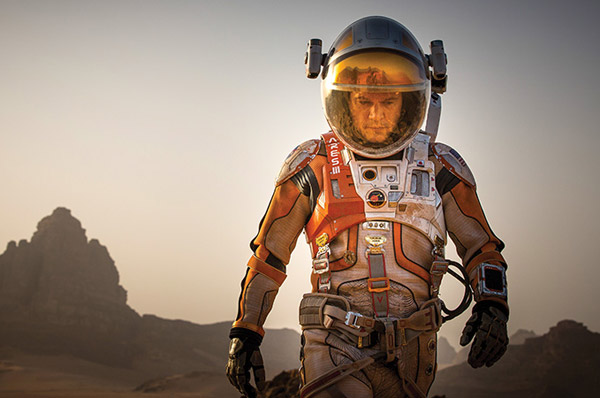