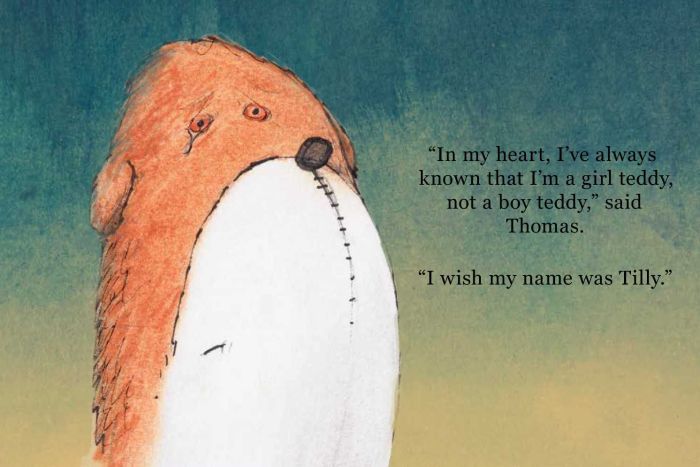 Jessica Walton seized upon a simple idea after a revelation in her family. When her father came out as transgender, eventually transitioning to become Tina, his daughter was struck by how few children’s books were available to help explain the situation to her children.

“What’s really nice with little kids is when you read them a story that reflects your family, you know that they’re able to identify themselves in that story,” Walton told Australia’s ABC News. “We wanted to find books that had transgender characters and there are some out there but none that are really aimed at the kind of babies to five kind of age range. So we wanted something really simple and sweet. Where someone would say ‘this is who I am’ and the characters around them would say ‘great, no worries let’s go and play.'”

Walton, who had never authored a book before, teamed up with illustrator Dougal MacPherson and produced Introducing Teddy, a story about a teddy bear who longs to be accepted as a girl called Tilly. Rather than try to secure funding through a publisher, they instead turned to Kickstarter to crowdfund the book’s printing costs.

The book was a hit, achieving its $10,000 target in days, before climbing up to $20,000 by the time the campaign ended on September 14. As a result of the successful crowdfunding, Walton’s book gained international attention, which was capped this week by the announcement that independent publishing house Bloomsbury had agreed to publish Introducing Teddy internationally in June 2016.

Walton describes the book as a “gentle, positive picture book about being yourself, and being a good friend.” Tilly the bear worries that her friends will reject her for being female, but they instead respond with “love, care and respect. In no way does the friendship between them change when Teddy transitions.”

For Walton, that positive reaction is borne from her own experience coming to terms with her father’s transition.

“Dad told our family she was a woman a couple of years ago. This opened my eyes and it opened my mind,” Walton told the Guardian. “Being gay myself, having trans friends, and being an active part of the LGBT community for a long time, rallying for gay marriage, etc., I didn’t know this person I had known my whole life was a woman, and it was amazing to get to know her better.”