By Doug Rule on October 29, 2015 @https://twitter.com/ruleonwriting 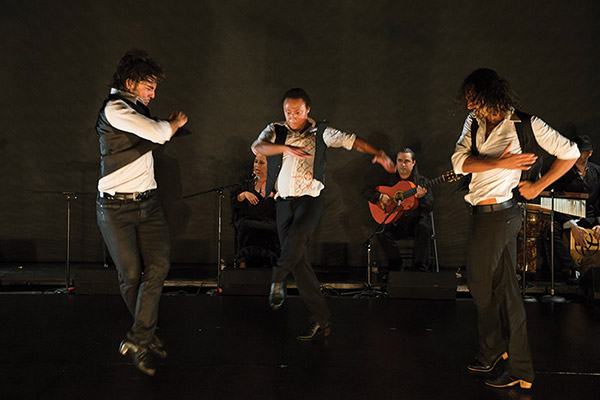 “When we first collaborated in 2013, just a couple months after we got married, we both agreed that this show is either going to make us or break us,” Aleksey Kulikov says. Of course, by that point it had been 15 years since Kulikov first fell in love with Edwin Aparicio, after meeting in a flamenco dance studio. The bond was already firm, and fortunately it only got stronger as a result of their work on the choreographed piece One Plus One. They’ve been collaborating ever since.

The husbands are co-directors of Flamenco Men 2, a showcase of male dancers that will kick off GALA’s 11th Flamenco Festival, curated by Aparicio. The piece is a sequel to one that Aparicio presented with Flamenco Aparicio Dance Company four years ago — showing that flamenco, as he puts it, “is not just about pretty women on stage.” The second time around, the focus is also on expanding notions of male flamenco dancers. The stereotype is still too often of the macho bullfighter and his take-charge attitude and fancy footwork. “We want to really show people a greater range,” Aparacio says, “with masculine and feminine features, with different intensities of style, with different experiences and different senses.”

Aparacio, an El Salvador native raised in D.C., teaches flamenco at the Washington School of Ballet when not leading and performing with his company. With Flamenco Men 2 he will dance with four other male dancers, including three originally from Spain. It’s the first in a three-part, two-weekend festival that also features a free daytime program Flamenco en Familia offering interactive demonstrations of the art form and intended for children. Also on the bill: Flamenco Frecuencies by Karen Lugo, a native of Mexico who will perform the work, also seeking to expand notions of flamenco, with Ricardo Moro of Madrid’s Casa Patas.

“Because it’s GALA’s 40th anniversary, I especially wanted this year to show that flamenco has become international,” Aparicio says. “It’s no longer what it used to be — only for Spaniards and gypsies. Now it’s also Japanese, American, Mexican and Salvadoran.”

And it’s also become more of an evolving art form precisely because of that increasing international representation, says Kulikov, a native of Ukraine who is trained in both ballroom and flamenco dancing. “It’s very interesting,” Kulikov says, “to see foreign artists bringing influences from their backgrounds into their dancing and challenging flamenco in ways unlike say classical ballet, with its strict interpretation of form.” — Doug Rule