Assassin's Creed Syndicate fixes a lot of its predecessors problems, though its London setting can awe and annoy in equal measure

As a franchise, Assassin’s Creed is more akin to Star Trek than any of its gaming cohorts. The even-numbered Trek films are often far superior products to their odd counterparts (Nemesis notwithstanding), and the same is apparently true of Ubisoft’s blockbuster, globe-trotting, neck-stabbing games.

The first Assassin’s Creed laid the foundations for what was to come. It was a solid, repetitive game that brought competent free-running and adaptive stealth to the Third Crusade. What followed was a game better in almost every way: Assassin’s Creed II transplanted players to 15th century Italy and handed them greater freedom, more reliable mechanics and a better protagonist. A larger, more emotional and more extravagant third outing took place in revolutionary America, but it faltered under its own weight — and a protagonist who was too gloomy to sustain an entire game. However, its naval combat sequences laid the path for Black Flag (my personal favorite). Ubisoft stopped trying to improve their assassination game and instead built the best pirate game possible, with assassins and templars comprising the backdrop. It was fantastic.

Then came Unity. Much has been written about last year’s game, from its myriad bugs, performance issues, and bloated feature set, to the fact that it squandered its incredible Parisian setting in favor of more tedious lore-building. I enjoyed Unity and could overlook many of its bugs, but it was clear that the yearly development cycle Ubisoft forces upon its developers had killed what could have been a remarkable title.

In many ways, Assassin’s Creed Syndicate (

) is Ubisoft’s apology to the gaming community, promising stability, streamlining and — above all else — fun. Has it worked? Not exactly. Is it better than Unity? Oh goodness, yes.

Syndicate drops players in London at the height of the Industrial Revolution, a time when Britain was the center of the world, establishing an empire that would soon encompass one quarter of the earth’s surface and one-fifth of its population. It was an era of black soot-belching factories, of child labor, of incredible scientific progress, and unimaginable inequality. Bringing the franchise closer to present day than ever before isn’t without its tradeoffs, but in terms of spectacle, Syndicate really is second-to-none.

It helps that the engine Ubisoft couldn’t quite come to grips with last time is put to excellent use here. To call this digital recreation of London beautiful feels like an insult to how incredibly detailed it actually is. From the dense smog that coats the industrial areas, to the cobbled roads that fill with rainwater and fallen leaves, to the cracks and chips in the red bricks that comprise hundreds of buildings in the British capital, nothing I’ve played in recent memory has so magnificently captured the feel of a place as well as Syndicate does. Except, perhaps, Unity last year.

The difference here is that Ubisoft has focused on refining the engine so that it actually works. There’s none of Unity‘s gaudy spectacle — large crowds, for instance, have been dispersed. Sure, they filled the screen with impressive density, but they brought consoles to a standstill and were a chore to run through. London is instead populated with a reduced number of pedestrians and a healthy amount of traffic — horsepower is very literal here, with private carriages, buses, and carts all trotting through the city streets. In fact, a lot has been excised to ensure Syndicate can actually run, not just run well. Multiplayer is gone, despite twin protagonists that seem perfectly designed for co-op fun, while interior locations have been dramatically scaled back from the number available in Unity, for instance.

While Syndicate avoids many of the performance issues that plagued its predecessor, it’s not perfect. The PS4 can just about handle the game at its 30 fps target, but Xbox owners face a much more hesitant experience. The framerate noticeably drops, usually in dense crowds, built-up areas, or in fast-moving scenes. Crashing a carriage through a busy part of town will send the framerate plummeting, while Ubisoft still can’t make the camera pan smoothly around the player during synchronizations without falling into a juddering mess. It’s been six games now — this shouldn’t still be an issue.

Where Ubisoft hasn’t failed is in the series’ typically excellent sound design. From your assassin’s feet sploshing through London’s many puddles, to the crunch of a hidden blade finding a target’s skeleton, to the whinnying of horses, chugging of factories, or chattering of pedestrians, Syndicate is filled with sound — played on a proper surround system, it’s glorious. Voice acting is also stellar, with main characters and random encounters alike all meeting the same high standard.

That holds true for our protagonists. Yes, protagonists — plural. Taking the lead are twins Evie and Jacob Frye, who leave their humdrum hometown for London to try and break the hold the Templars have on the city, while also trying to find a Piece of Eden. If mention of assassins, templars and Eden means nothing to you, worry not. Syndicate is much lighter on lore than past outings, instead relegating it to the background in favor of a much more interesting tale: the twins’ attempts to conquer London. Jacob is the main activist and brawler here, assembling his own gang called The Rooks, while Evie is much more straight-laced and stealthy. As Jacob gets lost in gang warfare, it’s Evie who remains focused on continuing their father’s legacy and finding the Piece of Eden — while also stopping the Templars. Jacob’s journey over the course of the game is arguably more enjoyable, as he leads his gang to greatness, but it’s Evie whose story will resonate more, as she struggles with the weight of their mission and her own personal feelings about its merits.

While you’re out destroying the Templars’ hold on London, you’ll encounter numerous historical figures (an Assassin’s hallmark). Charles Darwin, Charles Dickens, Alexander Graham Bell, Florence Nightingale and Queen Victoria are just some of those you’ll meet, each with varying degrees of usefulness — Bell, for instance, will assist the twins in procuring new weapons and gadgets. Dickens’ missions are side distractions, but are also some of the most fun you’ll have in Syndicate, as you hunt down ghosts and specters (in typical Scooby Doo fashion, they’re usually far more human than they appear). Meanwhile, Ubisoft has once again shoehorned in a modern story to provide context for why you’re killing people in the past, but I’ve already forgotten it and so will you.

In terms of missions, it’s a mixed bag. Repetition is key, it seems, to padding the game’s length (you’ll burn through the story in a weekend, but clearing up the map will take longer). As with prior games, there is lots of tailing enemies without getting too close, picking off specific targets, and working your way into buildings to assassinate specific people. Syndicate does nothing to improve things on this front, while additions such as kidnap missions — enter an enemy area, grab a target, and escort them to a waiting carriage — are fun at first, but can’t hold a candle to Unity‘s crime scenes. Mercifully, centerpiece missions, where Evie or Jacob are given a large area, a specific target, and multiple ways of carrying out the kill, remain and are as tense as ever. Sneaking through a building, picking off guards and planning your route to the target remains a series highlight.

Should you be forced from the shadows, you’ll find combat that’s stronger than ever. Evie and Jacob have a particularly brutal — and upgradeable — skillset, with enemies dispatched in wonderfully animated and bloody fashion. Gunplay remains as awkward as ever, but additions such as poisonous darts and various types of grenades help keep things remarkably fresh.

What hasn’t changed is the way Assassin’s games can simultaneously make you feel like a god while also causing incredible rage. Watching Evie and Jacob clamber up buildings, leap between ledges and freerun over beams never fails to impress, but it’s all ruined when the typically janky object detection rears its head. That Ubisoft still hasn’t fixed the ability of its protagonists to get stuck on objects, grab the wrong thing, or simply refuse to get down from that foot-high pole is remarkable.

Perhaps as a solution — and a result of the game’s more modern setting — a rope launcher is now part of both assassins’ arsenal. Players can now rappel up walls and zip between buildings like a nineteenth century Batman. It’s undoubtedly useful: London is so vast that it helps cut down travel time dramatically. It also makes for some thrilling gameplay moments, as more than once I’d find myself overwhelmed by enemies and have to rappel up the wall and jump between buildings to escape. However, and perhaps this is the boring old fart in me, it also somewhat dilutes the feeling of satisfaction obtained from prior games. Sure, climbing those synchronization points could be a chore, but satisfaction gained from finishing it was immense. As I sat on top of a tower, chimney or building that I’d zipped my way up in a few seconds, I didn’t quite feel as though I’d earned the incredible vista I was presented with. Modernity may offer new gameplay experiences to Creed fans, but this couldn’t be further from the purity (and much slower-paced) original game.

Overall, though, I greatly enjoyed my time with Syndicate. New gameplay mechanics help distract from a somewhat stale core and the series has never looked better, even if there are issues that Ubisoft still hasn’t fixed after multiple games. London is gorgeous, Evie and Jacob are interesting, and Syndicate‘s side distractions are suitably distracting. Though it’s far from a perfect game, Syndicate is still a pretty great one — and, really, after six titles and with the handicap of a yearly release schedule, that’s about all we can hope for.

Assassin’s Creed Syndicate is available now on PC, PS4 and Xbox One. 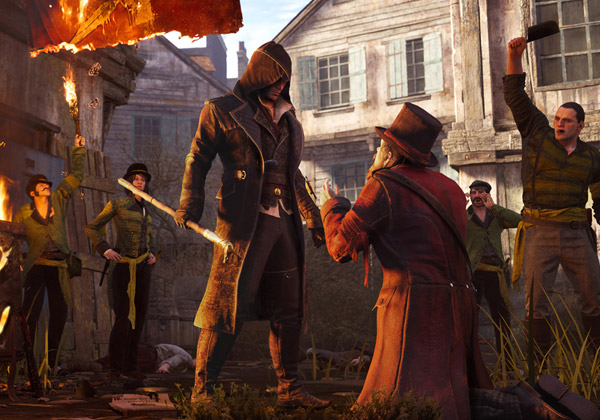 Following homophobic edits on "Spider-Man Remastered," some users are being banned for promoting LGBTQ erasure. 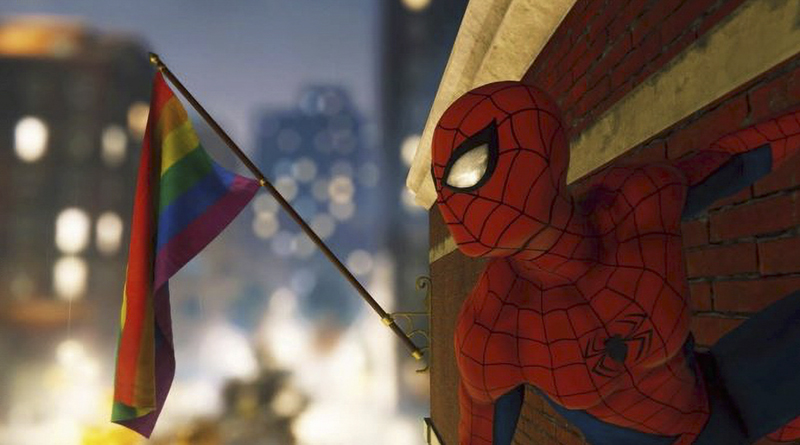 Spider-Man Remastered was released on August 12 following the smash success of the first Spider-Man franchise game, released in mid-2018. In the game, users play as Spider-Man, swinging across Manhattan to save the city from the ubiquitous supervillains.

Some users, however, took umbrage at the presence of Pride flags in the background of the game, taking it upon themselves to install a modification that changed the rainbow-colored flags into American ones.