By John Riley on November 5, 2015 @JohnAndresRiley 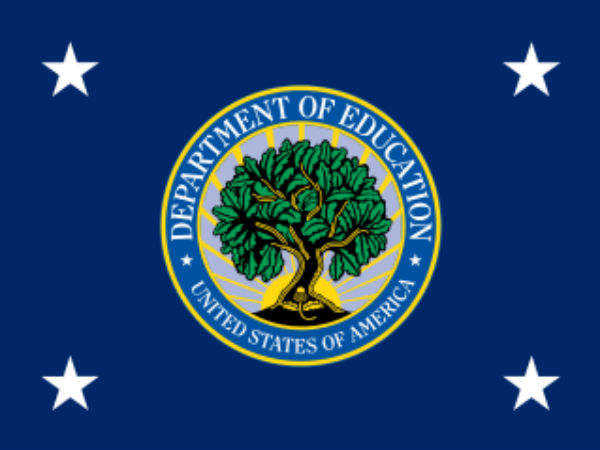 Flag of the United States Secretary of Education (Photo: Fry1989, via Wikimedia Commons).

The United States Department of Education on Monday ruled that an Illinois school discriminated against a transgender student on the basis of her sex.

The ruling, which has far-reaching implications for how the Department of Education views transgender students, found that Palatine High School District 211 engaged in sex discrimination when it denied the female student access to a gender-appropriate locker room because she is transgender. School officials insisted that they were trying to protect the privacy rights of other students by offering her the choice of using a separate restroom where she could change. Representatives for the district also made inaccurate statements and disparaging remarks, including that the trans female student is not “really” a girl.

But lawyers from the ACLU of Illinois, who are representing the student, argued that relegating her to a separate area was blatantly discriminatory. Additionally, fellow students gathered hundreds of signatures from students and community members calling for administrators to allow the plaintiff to access the girls’ locker room.

“What our client wants is not hard to understand,” John Knight, director of the LGBT & HIV Project of the ACLU of Illinois, said in a statement. She wants to be accepted for who she is and to be treated with dignity and respect — like any other student…. Rather than approaching this issue with sensitivity and dignity, the District has attempted to justify its conduct by challenging my client’s identity as a girl.”

The decision finds District 211 in violation of Title IX prohibitions on sex discrimination. It also mandates for other school districts — particularly those dealing with complaints from transgender students — that students should be allowed access to the restroom or changing facility consistent with their gender identity.

The Department of Education also concluded that the District’s claims about problems that could arise from allowing the student access to the locker room were unsupported, both because other students were not concerned about the issue and because, in general, girls do not fully undress to get ready for gym or sporting activities. The department also said that if other girls desire extra privacy, the District should offer them private spaces in which to dress, rather than isolating the transgender student.

“To date, the District’s position has been that it must deny Student A access to the girls’ locker rooms in order to protect the privacy interests of all its students,” reads the text of the decision, which was posted in its entirety on the Chicago Tribune website. “In fact, however, the District could satisfy its Title IX obligations as well as protect potential or actual student privacy interests. The District’s installation and maintenance of privacy curtains in one locker room go a long distance toward achieving such a nondiscriminatory alternative… Student A has consistently made clear that she would use the privacy curtains to change if allowed access to the girls’ locker rooms. This addresses the privacy interest in not exposing young female students in the girls’  locker rooms to the intimate body parts of Student A, a transitioning transgender girl, in a state of undress.

“To date, the District has not taken any steps to provide any private changing areas in its athletics locker room or swimming locker room,” the decision continues. “The District has indicated that it might be willing to install privacy curtains in its other girls’ locker rooms, but it has not done so.”

The student and her lawyers celebrated the department’s decision in a statement.

“This decision makes me extremely happy — because of what it means for me, personally, and for countless others,” said the student, who has asked to remain anonymous. “The district’s policy stigmatized me, often making me feel like I was not a ‘normal person.’ The Department of Education’s decision makes clear that what my school did was wrong. I hope no other student, anywhere, is forced to confront this indignity.  It is a good day for all students, but especially those who are transgender, all across the nation.”

John Riley is the local news reporter for Metro Weekly. He can be reached at jriley@metroweekly.com
← Previous Story Reacting to Ryan: LGBT groups react to the new Speaker
Next Story → Kansas teacher under fire for showing gay bullying film