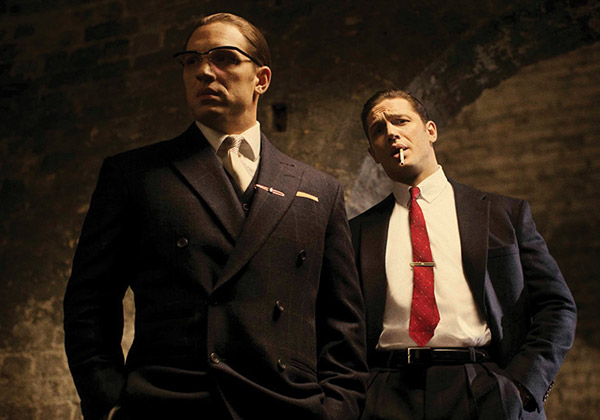 It can take only one role to tarnish an actor’s chances at awards success. Eddie Murphy destroyed his Dreamgirls Oscar dreams by making the hideously awful Norbit. Sandra Bullock almost derailed her Best Actress win for The Blind Side by starring in All About Steve. Halle Berry made everyone question her Academy Award while they suffered through Catwoman.

It’s a very rare talent, though, to both generate awards buzz and potentially ruin it in one film. But that’s something Tom Hardy manages with ease in Legend (

). Based on the lives of the infamous Kray twins — London gangsters during the ’50s and ’60s — Hardy has the unenviable task of stepping into both sets of shoes, one a suave, ruthless leader, the other a gay, schizophrenic sociopath.

As Reggie Kray, Hardy delivers an incredible performance. Kray headed the brothers’ gang The Firm, sitting atop a crime empire that eventually controlled most of the London’s East End. Reggie handled the day-to-day runnings, managing people, sorting finances, tackling disputes with other gangs, negotiating with the American Mafia. But he also longed for normalcy. Taking control of establishments that were frequented by celebrities gave him a taste for fame, for legitimacy, for aspiring to be more than his Cockney roots. He also longed for married life and to settle down.

Hardy can flit between cool calmness and blind rage in fewer frames than the camera seems able to capture.

But underneath the surface seethed a hot-headed temper that was quick to flare, a desire for violence that was hard to quell, a thirst for more control, more drugs, more gang members, more infamy. Reggie Kray wanted it all, the trappings of fame and the grit of gang life. Hardy steps into his shoes with the arrogance, the bravado, the sexual dominancy the role demands. He marches down streets, slings punches with confidence, stares down rivals. Hardy can flit between cool calmness and blind rage in fewer frames than the camera seems able to capture.

It’s perfectly complemented by Emily Browning as Reggie’s wife Frances, whose doe-eyed beauty is slowly stripped away as she realizes love can’t change him. Indeed, her transformation, from upbeat, naive and love-filled to empty, hardened and cold is realized wonderfully by both Browning’s performance, make-up, and a filter applied whenever she and Reggie share the screen in later scenes. Whereas their courtship is framed in bright colors (not least her wardrobe), as the stark reality of life as a gangster’s wife settles in, their every interaction becomes grey, the only emotion shown in spouts of anger from either side at the frustration of their growing divide. Frances’ story isn’t a happy one — its ending is one of the film’s genuinely tearful moments — and Browning, who also narrates, handles it wonderfully.

There’s almost a poetry to the violence. If it weren’t so stomach turning, it’d be beautiful.

Brian Helgeland captures their performances with ease, revelling in the ’60s aesthetic and controlling the film’s action scenes with confidence. Indeed, the central love story almost deflects from the brutality of Legend. Helgeland doesn’t shy from conveying the violence that occurred. Shootings, stabbings, torture, fist-fights — all are presented in matter-of-fact fashion. A scene near the film’s end shocks with the sensationalism, as an arrogant gang member dares to stand up to Reggie. Hardy unleashes his character’s id and drives a knife into the man countless times, as Helgeland captures the blood, the movement, the reactions, the spatters. There’s almost a poetry to the violence. If it weren’t so stomach turning, it’d be beautiful.

Unfortunately, Helgeland’s script can’t match Hardy and Browning’s performances, nor his handling of the film’s direction. The odd swerves between po-faced gangstering and giddy love-making, or dramatic shouting and genuinely funny comedy means Legend never settles into a solid tempo, instead lurching through both time and various scenarios from the Kray’s lives. This doesn’t threaten to derail the film, however. Instead, that honor falls to Hardy himself.

And that brings us to Ronnie Kray — schizophrenic, openly gay (or possibly bisexual) Ronnie. It’s here Legend genuinely falters and Hardy threatens to destroy his impeccable work as Reggie. Ronnie is untethered to reality, unconcerned with its rules. He wants the gang to be bigger and better, but without the fame and fortune Reggie craves. He has two young gay men as his cohorts, fraternizes with politicians, and dreams of establishing his own city in Africa, while his instability constantly threatens the brothers’ ability to avoid the police. He is a thorn in Reggie’s side, but Reggie remains devoted to him. When the Mafia recognizes the threat Ronnie has to their veil of secrecy, they ask Reggie to kill him. He can’t.

Hardy is so over-the-top as Ronnie that it’s almost unwatchable.

Unfortunately, you’ll wish he would. Hardy is so over-the-top as Ronnie that it’s almost unwatchable. He is utterly unlikeable — Ronnie has many of the film’s more humorous moments, but he also has some of its most brutal — and Hardy makes him into a caricature of a caricature. He speaks as though he’s taken too many hits to the head, he is given thick glasses, a bad hairline and prosthetics so that Reggie is the “pretty one” — though in reality both twins were almost identical. When he’s angry, he spits — literally — his lines. Gay viewers will marvel at the frank honesty with which Ronnie lives his life (and Reggie’s support of it), but there’s little other redeeming qualities to be found here and Hardy’s performance does nothing to aid that.

Contrasted with his portrayal of Reggie, it’s a miracle anyone on set let it happen. Ronnie is wildly out of control and overacted in almost every scene. Hardy may be having a ball, but the audience certainly isn’t. Legend is an appropriate moniker for Hardy’s performance as Reggie Kray, but Ronnie — as in real life — threatens constantly to bring everything crashing down around him.