'Motown the Musical" wraps a timely discussion into a stunning show

If Motown is your era, then you’ll love every second of the Broadway tour of Motown the Musical (

), now playing at the National Theater.

With a book by Berry Gordy and music from Motown’s legendary stable of performers, the premise of the musical is a slightly revisionist recollection of the history of the show’s eponymous record label. Starring Josh Tower as Gordy, the show works its way through Gordy’s childhood, the beginnings of his empire, his relationship with Diana Ross, and his dealings with many of the legendary singers who would bring black music and culture to homes around the world. The show is framed by a 25th anniversary reunion performance, celebrating the great acts of Motown. His company in decline and most of his best acts now departed, Gordy needs to decide whether to hold onto old grudges or to embrace an imperfect future.

Add to this captivating, true story a collection of many of the most loved songs of a generation, combined with stunning choreography by Patricia Wilcox and Warren Adams, and a good dose of audience participation, and you have a show that is as joyful as it is timely.

Allison Semmes, leading in the role of Diana Ross, is an early pop-queen come to life. Her voice is magnetic, zipping from belting out leading vocals with The Supremes to tenderly gliding through the waltz of Ross’ first single. And there is her presence on stage, fierce when with Gordy and gentle when bringing audience members up to join her on “Reach out and Touch.” Semmes is the ideal fusion of sweet and spunk, and her acting chops prevent Ross from becoming too much of either.

It doesn’t hurt that she and the rest of the cast are incredible dancers. The show opens with a spectacular scene of competing groups, anchored by The Temptations, and never slows down.

Perhaps the most enjoyable performance of the evening hails from Leon Outlaw, Jr., who has the unenviable job of portraying young Berry Gordy, young Stevie Wonder, and, most enjoyably, young Michael Jackson. As Gordy, Outlaw captures a young boy looking for a role model in a segregated world with few options. Settling on Joe Louis, it’s easy to see how Gordy would grow up to pursue fame and fortune. Portraying Michael Jackson, Outlaw is able to convey the raw talent of the wunderkind who fronted the Jackson 5 and, as this story is uncomplicated by Michael’s post-Motown career, Outlaw succeeds in bringing a sweetness and tenderness to the star. Wrapped in floor length purple fringe, Outlaw belts “ABC” as the energetic apex of the second act.

Another standout is Jesse Nager, who not only does justice to Smokey Robinson’s golden voice, he brings humanity to the fiercely loyal man who would stand by Gordy and Motown. Nager’s energy and jerky movements bring some needed levity to some of the musical’s most serious scenes and, whether he is first to take the stage after the Motown tour receives threats while traveling the segregated south or giving Gordy some much needed straight talk, his Smokey is one of the anchors of the show.

Jarran Muse rounds out the cast as Marvin Gaye, and his socially aware Motown maverick serves as a compelling conduit for many of the heavier issues raised by the musical.

Charles Randolph-Wright masterfully directs the whirlwind of dance, color, and music. Clocking in at around two hours, it zips through more than sixty songs without feeling rushed or constrained. Randolph-Wright’s true genius is making what could have been a sugary rush of a musical an enjoyable, but meaningful, production.

Motown seems, at first look, to be a collection of dynamite songs stitched together with a revisionist account of the life of Berry Gordy. This Gordy is never in the wrong in his relationships, he always treats his artists well, and the only flaw the show admits is a brief moment of poor sexual performance. Even this failing hardly matters, as he remains attached to Diana Ross for several more scenes.

Looking past the superficial characterization though, one sees a show that takes on important issues of race and opportunity in America. Motown strikes head-on the difficulties that black Americans experienced as entrepreneurs, performers, and disenfranchised citizens. It celebrates the success that Motown had in bringing joy and black culture to a larger audience, but its commentary on opportunity and institutionalized disadvantages is as astute now as it was when Berry Gordy launched his company.

Smart, fun, and boasting an incredible collection of songs, just about anyone can take something uplifting from its story of accomplishment, adversity, and redemption. It doesn’t matter if Motown is your era. It’s a fun production to see, and an important one to contemplate. 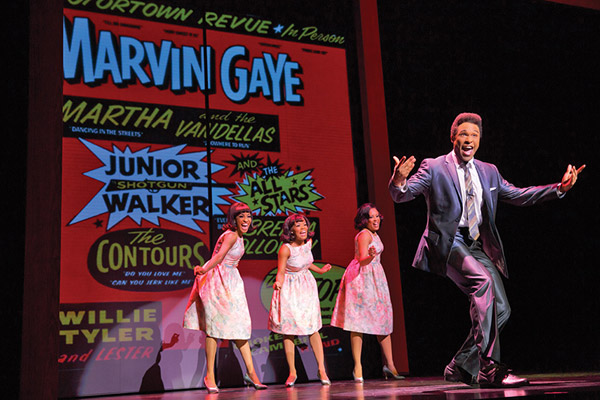