"Battlefront" is a beautifully faithful homage to Star Wars, wrapped around a fairly traditional shooter

As my feet crunched through the snow, I’d had enough. The Rebel scum were going to pay for what they’d done. I’d already endured the crushing defeat of an Imperial squadron of starfighters and only just managed to thwart the Rebel Alliance in the dry caves and arid landscapes of Tatooine. But here, on the frozen wastelands of Hoth, I watched as they brought down one of our monstrous AT-ATs, beat back our advances on their icy base, and successfully launched two cruisers from the planet’s surface. It was time to call in Lord Vader.

What should have happened next is Vader and the 501st Legion storm the rebel base in one of the Empire’s biggest victories during the Galactic Civil War. Except, that’s not what happened — what actually took place was much more embarrassing. A few minutes after successfully summoning the clearly asthmatic Darth Vader, I watched as his lifeless body slumped into one of the many passageways scarring the surface of the battlefield and a nameless Rebel sharpshooter ran offscreen.

), a conveniently-timed third title in the Battlefront series. Utilizing five locations from the Star Wars universe — Hoth, Tatooine, Endor, Sullust and Jakkum — it allows players to change the narrative course of some of the sci-fi series’ most thrilling large-scale battles. Whether it’s TIE fighters versus X-Wings in the skies over Sullust’s lava fields or Leia versus Boba Fett in the jungles of Endor, Battlefront is both a reimagining and recreation of the intense thrills and gloriously cinematic action of the beloved Star Wars franchise.

It helps that developer DICE absolutely nailed the aesthetic. Any casual Star Wars fan would instantly recognize the characters, ships, guns, explosions and locales on offer here, which are all beautifully rendered in a custom-built graphics engine. Battlefront is arguably the prettiest shooter currently available, from the red and green laser fire that produces just the right amount of sparks on contact, to the slightly wobbly maneuvering of the AT-ATs and smaller AT-STs on the terrain, to the way your chosen character leaves footprints in the snowfields of Hoth, this is a faithfully designed recreation of Star Wars‘ various worlds.

The sound, too, mostly gets it right. There’s the “pew pew” of laser fire, the almost screaming as a TIE-fighter is shot and flies out of control before exploding, the deafening crash and rumble of each weighty step by an AT-AT — it’s all here. There’s even John Williams’ iconic score to fully aid in your nostalgia. However, DICE has also employed an orchestra to create its own instrumental and interstitial music and, while it’s lovely in its own right, it just can’t mesh with the immediately identifiable sounds of Williams’ work. Voice acting, too, is about as accurate as the series’ Stormtroopers. NPCs and characters added by DICE are well-acted, but characters from the films are presented either with audio taken directly from said films or with terrible attempts to mimic them — I can’t tell which, as the quality is so bizarrely downgraded in comparison with every other piece of spoken dialogue.

jumping into battle as Darth Vader, choke holding and throwing my light saber with gay abandon, or screaming through the skies in a X-Wing elicits a gleeful smile.

Not that you’ll hear a great deal of dialogue, except for when hero characters enter the battlefield and promise to help shift the tides of battle. There is no single-player campaign in Star Wars: Battlefront. No cutscenes, no narrative, no connected missions where you battle through the films like there were in the original games from the early ’00s. This is multiplayer only, for better or worse.

In that regard, though, Star Wars: Battlefront mostly succeeds. By not getting bogged down with trying to stitch a narrative together in a universe crammed with films, TV series, comics, books and billions of gigabytes of fan fiction, they could instead try their darndest to create an engaging, addicting multiplayer experience. What it really boils down to, though, is whether or not you’re a fan of DICE’s Battlefield franchise. If you are, perfect, as what Star Wars: Battlefront represents is a watered-down, reskinned version of that long-running Call of Duty rival.

Again, though, that’s not entirely a bad thing. Battlefield has always excelled in large-scale, vehicle-rich warfare, and that translates perfectly to Battlefront. There are a plethora of modes on offer, from standard team deathmatches where you’ll kill as many of the opposing team as possible, to more Star Wars-inspired modes, such as the aforementioned Hoth battle, known as Walker Assault. Those on the Rebel Alliance will work to slow the advancement of the Empire forces by bringing down AT-ATs, activating beacons, and otherwise murdering stormtroopers. If they can successfully keep the Empire at bay, three ships will evacuate and the game will be won. If they fail, well, it’s explosion time for those poor souls.

There are other familiar modes that have been given Star Wars-appropriate makeovers. Supremacy tasks either side with capturing and controlling five key locations, Cargo drops valuable cargo boxes into the battlefield and tasks each team with stealing them from the other side, Droid Run has teams trying to hold onto three Power Droids, and Heroes vs Villains puts famous characters from the series onto either team and tasks players with keeping them alive. There’s also Fighter Squadron mode, air-based battles (sorry, no space warfare here) featuring intense dogfights (Hero characters here include Vader’s ship and the Millennium Falcon). Arguably the most thrilling modes are the ones with the most players — up to 40 in total during Supremacy and Walker Assault. As ships fly overhead, laser fire fills the screen, and various walkers stomp around, they best capture the chaotic action of the films’ numerous battle sequences. Other modes feel more like standard filler, but what’s here works — and when it’s on form, it works really well.

If you’re not interested in playing with quite so many other people, you can attempt the closest thing Battlefront has to single player. Training missions ease you into controlling the game’s various vehicles (the Speeder section on Endor is particularly good fun), but it’s Survival and Battles where you’ll spend most of your time. Survival is particularly good. Playable either alone or with a friend, you’ll face off against wave after wave of increasingly difficult enemies, be they fighters, walkers, or bipeds with guns. These battles change based on location and make for scrappy, intense bouts. Battles are more standard fare, putting you head-to-head against either a friend or the computer (plus plenty of bots) in typical deathmatches — though Hero Battles let you play as Luke, Leia, Han Solo and others, which is a lot of fun if you love a particular character.

If you’re not the sort who loves the deep customization of Call of Duty and other shooters, Battlefront is definitely for you. There’s an almost paltry number of guns on offer, with limited scope for changing loadouts beyond picking a firearm and backing it up with a number of secondary weapons — such as explosives, charges, turrets and other such items. Players can change the way their character looks and create several different variations of loadouts for different maps, but there’s limited depth here — though the levelling system constantly teases more powerful items, so there’s definitely an incentive to keep playing. You’ll start with just a gun, but the moment you see someone throw a devastatingly powerful grenade you’ll want to unlock it. Scattered around the battlefield are various powerups, too, which grant temporarily powerful weapons such as rockets with limited ammo, shields to defend your allies, or the ability to jump into the boots of a hero character or into the cockpit of a fighter.

And that’s really the beauty of Battlefront. It’s not a deep experience, but it’s a fun one. The novelty of the Star Wars universe still hasn’t faded in my time with the game, and jumping into battle as Darth Vader — choke holding and throwing my light saber with gay abandon — or screaming through the skies in a X-Wing still elicits a gleeful smile. As I watched Vader lie lifeless on Hoth, I wasn’t deterred. I wanted to jump back in and do more, shoot better, push harder, take the planet for my team. As an Imperial Star Destroyer slid into view overhead and the familiar green beams of my teammates lit up the battlefield, I couldn’t help but wonder what would have happened if the Empire had won. Then, the match finished, the game dropped me into the Rebel Alliance for a slog through Endor’s dense woods, and my allegiance instantly switched. Time to see if Luke Skywalker can last any longer.

Star Wars: Battlefront is available on PC, PS4 and Xbox One. 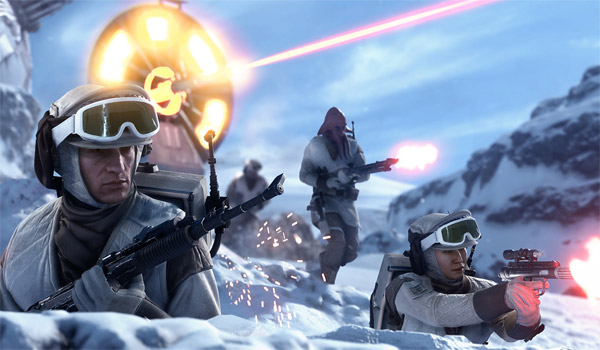