The von Trapps carry on the family tradition, this weekend performing with the National Symphony Orchestra

By Doug Rule on December 10, 2015 @https://twitter.com/ruleonwriting 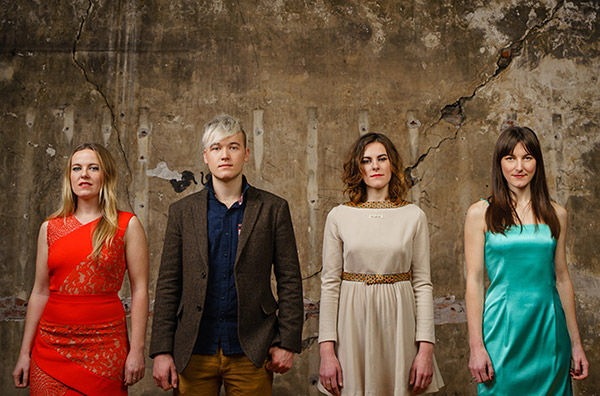 “We’re hoping for maybe Sufjan Stevens or Jim James,” says Sofia von Trapp about potential EP producers. “You know, shoot for the stars. Why not right?”

The von Trapps are themselves natural stars in the American music firmament, descendants of the real-life singing family that inspired The Sound of Music. Specifically, the von Trapps are the children of Werner — or Kurt, as he was named in the movie — the youngest boy.

Earlier this year, the harmonic folk-pop quartet released its first EP of all original material, Dancing In Gold, produced by Israel Nebeker of Portland’s indie-folk band Blind Pilot. And last year, the group worked with Pink Martini on the Portland chamber-pop act’s album Dream A Little Dream. In fact, it was Pink Martini’s gay leader Thomas Lauderdale who helped put the von Trapps on the map, connecting them with prominent producers in both the pop and classical realms.

Sofia von Trapp gave some insight into the band’s origins in advance of this weekend’s holiday shows with the National Symphony Orchestra at the Kennedy Center.

MW: I understand it was something of a fluke that you started singing as a group.

VON TRAPP: Yeah, it was never planned. Our parents don’t sing at all, and we were never pressured into doing this. But our grandfather would always come visit us in Montana, and he would teach us little Austrian folk songs. And when he had a stroke, about 15 years ago, we recorded those songs that he taught us. It just seemed like something fun to do. We never expected to be doing this for as long as we have, and singing in amazing halls like the Kennedy Center.

MW: When did you first sing professionally?

VON TRAPP: We were asked to do a two-hour show at MusikFest in Bethlehem, Penn., and we started getting shows from that point on. It’s been almost 15 years now that we’ve been doing this professionally. I was 13, August was 7. So we were young.

MW: So your voices have changed in that time.

VON TRAPP: August’s voice especially. [Laughs.] Once we started performing professionally, we had a lot of really amazing mentors and vocal coaches. We started taking it really seriously. It’s such a beautiful way to grow up.

MW: When did you move to Portland?

VON TRAPP: We’re originally from Montana but we moved here because of Thomas Lauderdale of Pink Martini. It’s our four-year anniversary with Thomas. We met him at a Christmas tree lighting in downtown Portland, and we immediately fell in love with each other. So he said, “Oh yeah, come to Portland for two weeks. We’ll record an album, it’ll be done in two weeks. And be so much fun.” And two weeks go by, and two months go by. And finally two years later we finished this album, Dream A Little Dream — and it’s the most beautiful album I’ve ever been a part of. We ended up just staying in Portland, and making so many great friends.

MW: How familiar were you with The Sound of Music before you started the group?

VON TRAPP: Well, I didn’t understand the impact The Sound of Music had on the world until we started traveling and singing “Edelweiss,” and everyone just bursting into tears. Or singing along. It’s really incredible. There are two sides of the story — there’s our grandfather telling us stories of, after they escaped Austria, what they did to survive. And moving to Stowe, Vermont, and living their lives. And traveling and singing for 20 years. But then there’s also everyone’s memories and these feelings of nostalgia through The Sound of Music, the musical, which is about our family before they escaped Austria. And that’s also beautiful. I mean, having Julie Andrews play your great grandmother is pretty amazing.

MW: Have you met Julie Andrews?

VON TRAPP: Yes! We met her on the Oprah show, actually. It was five years ago — the 45th anniversary. We were on the Oprah show and we sang “Edelweiss” with Christopher Plummer and Julie Andrews and the rest of the cast. Which was quite an amazing experience.

MW: You were able to sing and not be too starstruck?

VON TRAPP: Yeah, I know! It was difficult, but we managed through it.

MW: So the von Trapp family took up residence in Vermont after Austria?

VON TRAPP: Yeah, when they escaped Austria, the only reason why they could was because they had a visa for one show in the U.S. So they were able to escape. And they ended up eventually finding a home in Stowe, Vermont — where they made this beautiful, beautiful lodge, which is still there to this day.

MW: How many times have you seen The Sound of Music, the movie?

VON TRAPP: So many times! And in as many different circumstances — everything from sing-alongs to by chance, our friends having The Sound of Music being played.

MW: You’ve performed in the musical version before?

VON TRAPP: That was the first year — it was before we started touring internationally. We did a show in Raleigh, North Carolina. August, he played our grandfather Werner, the youngest boy of the seven children.

MW: Are there other singers or singing acts from the family?

VON TRAPP: There’s our aunt, our dad’s sister. She’s a professional singer. Really lovely. Beautiful singer-songwriter. We’re the only siblings that sing together out of the family, but everyone is very musical.

MW: Is there a favorite — apart from the obvious, of course?

VON TRAPP: That’s really difficult — I love The Sound of Music, but there are so many good ones. Like My Fair Lady is one of my favorites. Mary Poppins. There are so many beautiful musicals out there!

MW: Are you looking forward to your holiday show with the NSO at the Kennedy Center?

VON TRAPP: Yeah. We’ll be doing traditional carols. We love to sing in different languages — that’s why we fit so well with Pink Martini. It was a tradition of our grandparents, and then we took on this tradition as well. Whenever we would go to a different country, we would learn a song in their language. And so, when we were in France, we learned “Noel Nouvelet,” which is this beautiful, old French carol. So we’ll be doing that a cappella. And a Spanish carol. And some more traditional, like “Carols of the Bells,” but we’ll be doing it in Ukrainian — the original composition, which is really cool.

MW: Do you speak other languages?