$75,000 in grants given to 23 organizations at Baltimore ceremony

By John Riley on January 30, 2016 @JohnAndresRiley 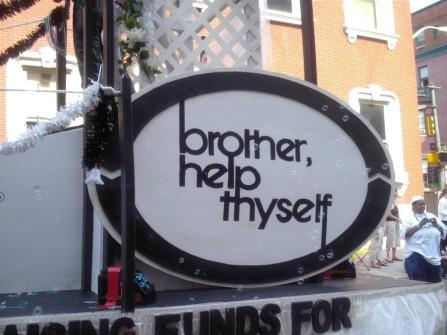 Brother, Help Thyself (BHT) awarded over $75,000 in grants to 23 organizations at its annual awards ceremony on Saturday, January 30, at Grand Central in Baltimore.

Now in its 38th year, the ceremony marked a significant milestone for the organization, which provides yearly infusions of grant money to local LGBT and HIV/AIDS nonprofits, as it surpassed the $3 million donation mark.  “Our board looks ahead to our grant reception all year long with great anticipation as the culmination of a year of hard work,” BHT President Jim Slattery said in a statement. “We plan events and raise money, but we truly love nothing more than to give it all away each January.”

Most of this year’s awards ranged from $1,000 to just over $6,000. The largest grant ($11,450) went to HIPS, an organization that, among other things, provides assistance to sex workers struggling with drug addiction. (A complete list of the 2016 grantees follows this article.)

BHT also presented five community service awards to people, businesses or nonprofits who have demonstrated exceptional dedication to working on behalf of the LGBT community. The Anthony J. Bachrach Award for Outstanding Service, given to an individual who has worked diligently on behalf of the LGBT community, was presented to Margaret Cho for assisting in BHT’s fundraising efforts. Cho, who was not present at Saturday’s ceremony, offered 100 seats to her Oct. 9 show in Washington at a reduced price, with proceeds benefitting BHT.

The Billy Collison Award was presented to the Rainbow History Project, which has undertaken efforts to preserve Washington, D.C.’s LGBT history. BHT’s Founders Award, given to an emerging organization that manages substantial achievements with minimal funding, went to Mary’s House for Older Adults. The George Dodson Business Award, given to a business that supports the LGBT community, was given to Grand Central, a gay bar in Baltimore, which also hosted Saturday’s event. (Metro Weekly was honored with the Dodson award in 2012.)

The President’s Award, the first of its kind and presented at the discretion of the organization’s president with board approval, was given posthumously to Pete Deakin, a friend of Jim Slattery’s, who inspired him to come out as gay and dedicate his efforts to serving the LGBT community. Deakin’s sisters, Barbara Deakin of New York and Phyllis Breedlove of Virginia, accepted on his behalf.

The Audrey Herman Spotlighters Theatre, a former grant recipient, and D.C.’s Different Drummers, which this year was awarded $2,380, provided the event’s entertainment.

“We couldn’t do half of what we do without the leadership and support of the great folks we honored this year, and in years past,” Slattery said in his remarks. “The Board and I are so proud to work alongside all of our grantees, old and new, year after year.”

A complete list of this year’s grant awardees follows: