But Mexico is appealing its punishment, saying more discussion of the issue is needed

By John Riley on January 15, 2016 @JohnAndresRiley 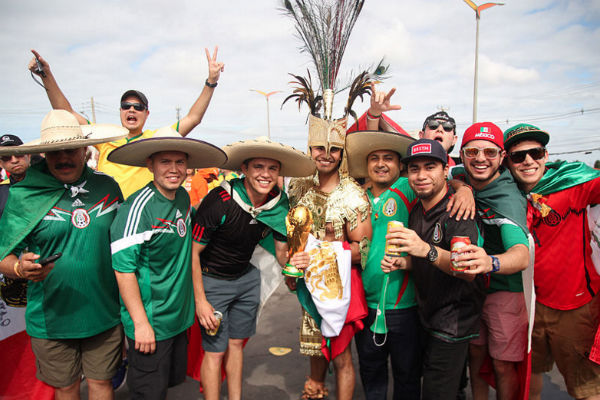 Fans from the Brazil and Mexico match at the FIFA World Cup in 2014 (Photo: Brazilian government, copa2014.gov.br, via Wikimedia Commons).

FIFA, the governing body for world soccer, on Wednesday announced it has imposed fines against the various football associations of Argentina, Chile, Mexico, Peru and Argentina for homophobic chants by fans.

FIFA says that the “insulting and discriminatory chants” were uttered by fans during qualifying matches for the 2018 World Cup, reports The Guardian. The chant, in which fans scream “¡Puto!” during goal kicks by the opposing team’s goal keeper, is roughly translated as “fag,” “man whore” or “coward.”

Some who have used the phrase argue that it is not meant to be directed at gays, but is only used to ridicule opponents as weak and unmanly. But others say that the word clearly has homophobic roots and has historically been used to degrade gay men, according to OutSports.com. The chant originated with Mexican fans, but has been adopted by many other Latin American nations.

“FIFA has been fighting discrimination in football for many years and one part of that has been through sanctions,” Claudio Sulser, chair of FIFA’s disciplinary committee, said in a statement. “But disciplinary proceedings alone cannot change behavior by certain groups of fans that unfortunately goes against the core values of our game. FIFA and the entire football community have to be proactive in educating and inspiring a message of equality and respect across all levels of the game.”

But the Mexican Football Federation announced it was appealing the fine and the warning from FIFA for fans’ actions during the Mexican national team’s 3-0 victory over El Salvador on Nov. 13.

“It’s an issue that requires more discussion, Guillermo Cantu, the federation’s general secretary, said in a statement to ESPN Deportes. “It is a chant that occurs in games, and not just recently.”