This year's animated short films display a wide range of emotions, but there's one clear winner for the Oscar 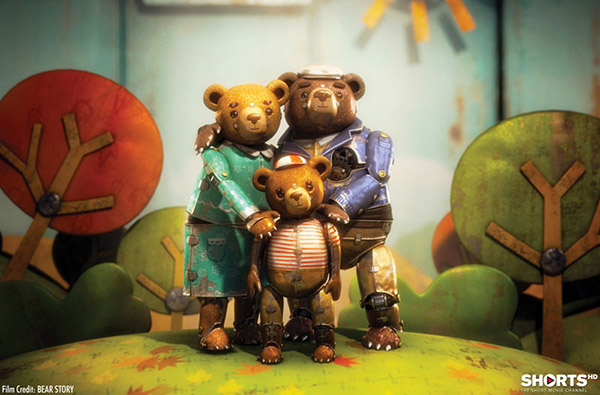 It’s a rare thing indeed when Pixar has arguably the weakest film in an animated category, but such is the strength of this year’s nominees for Best Animated Short Film that even a good effort from the animating powerhouse isn’t going to be enough to take home a statue. Dealing with a variety of issues — family, death, friendship, religion, the brutality of man — the 2016 contenders are proof that we don’t need 90 minutes and millions of dollars to evoke emotion from an audience. Expensive digital artwork isn’t necessary to convey a sense of place. From stick figures to pencil shading, lavish 3D modeling to subtle animation, these are the five contenders for this year’s Animated Short.

Chile’s entry, directed and co-written by Gabriel Osorio Vargas, is a multi-layered meditation on the destructive force and brutality of man, told from the perspective of a bear. We watch as he carefully crafts the models of a diorama, walking through his empty home, glancing at photos of a family that’s nowhere to be found. Venturing into town, he sets up the diorama box and a nearby child runs to view it. What follows is a gorgeously-animated sequence, complete with scale models, cogs, wheels, metallic figures and scrolling backgrounds, as the bear tells his story, where humanity is the villain, tearing into apartment buildings and ripping animals from their homes to be carted off to join the circus. Vargas’ film is a critique of the circus trade, of human exploitation of animals, of loss, humiliation, and ultimately hope. A somewhat ambiguous ending leaves the viewer questioning whether the happy ending depicted so wondrously in the diorama reflects reality, but that only enhances the charm of an otherwise spellbinding short. 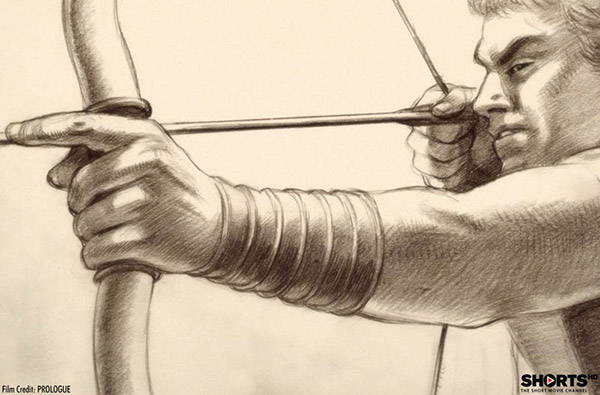 Prologue takes hand drawn animation back to something primal, something primitive, but also something captivating to behold. The British short, directed by Richard Williams and produced by his wife, Imogen Sutton, depicts a battle between four warriors in ancient Greece, two Athenian, two Spartan. Using pencil shading on an off-white background, the animation is both simple and rich, granting the fierce fight between the men an ethereal quality, but also a ghastly one — we see horrors and imperfections in the men’s faces that would have been erased in the cleanliness of 3D animation, which would also have robbed the film of its impact. It’s not a flawless technique, as perspective is easily lost in some scenes due to the lack of additional animation or cue points on the plain background, but it is perhaps the perfect way to capture the action that follows, as the battle descends into bloody madness, gruesomely depicted in swathes of red pencil. Williams’ film isn’t long, but its style and raw quality eschews the strive for perfection of more modern animated fare. In both tale and technique, this is a period piece, but that only makes it all the more compelling to watch. 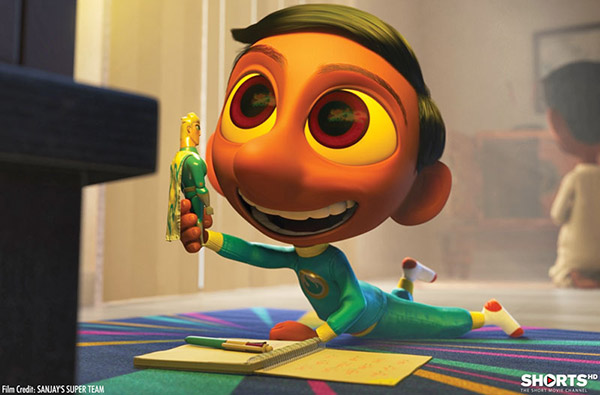 Pixar’s latest short is sweet, beautifully animated and makes the most of its short runtime. Unfortunately, in this year’s field of nominees, it’s also just not… well, Pixar enough to stand out. Directed by Sanjay Patel, it’s a “mostly” true story about a boy and a father, with the former happy to watch his superhero cartoons and the latter trying in vain to inspire the boy to follow in his religious footsteps. Sanjay is engrossed in Super Team, a fictional triad of superheroes, while his father would rather he pray with him. After having his toy removed and forced to sit in front of a cabinet containing three Hindu gods, Sanjay accidentally extinguishes the shrine’s oil lamp and is transported into a world where Hindu gods Vishnu, Durga, and Hanuman are the superheroes. What follows is a sequence that shows why Pixars are masters of their craft: the animation is magnificent to behold, with eye-popping colors, crisp textures and incredible depth. What’s missing, however, is soul. Sure, it has a typically Disney saccharine ending, and the film should be lauded for giving focus to a family that isn’t white or Christian. However, the end result just isn’t memorable enough to warrant taking home the Oscar this year. Surrounded by less established competition, Pixar has come up surprisingly short. 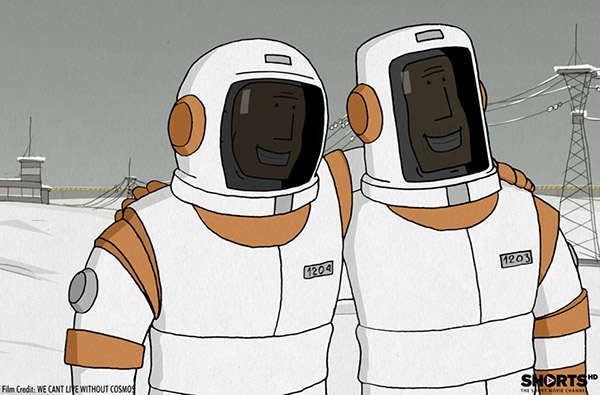 We Can’t Live Without Cosmos

Don’t let We Can’t Live Without Cosmos‘ slightly ropey animation fool you. This Russian entry from director Konstantin Bronzit and producer Alexander Boyarsky has depth beyond its rudimentary animation style. Indeed, it lulls viewers into a false sense of security, as it depicts two friends working their way through cosmonaut training in a remote, snowy base. Their relationship is depicted as being the closest of friends, from sharing a room to pushing each other to go harder at their training to daydreaming together about exploring space. But partway through, Cosmos transforms from a buddy movie into something darker, something deeper. It strips away the lightheartedness — though not the light comedy that runs throughout — in favor of a glimpse into depression, into loss, into a grief so pronounced that a person doesn’t know how to carry on living. It’s a fascinating transition, with an ending firmly rooted in fantasy but bursting with heart. We Can’t Live Without Cosmos is proof that rough animation needn’t detract from a well-told story. Indeed, it would be my favorite of this year’s contenders were it not for the last film in the category. 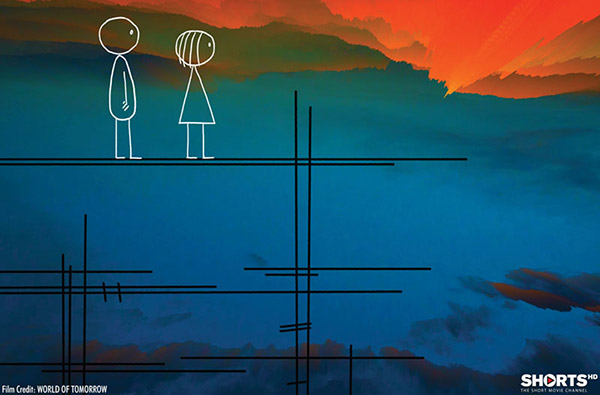 World of Tomorrow is a masterpiece. American filmmaker Don Hertzfeldt has produced something rooted in science fiction, but with all of the best traits of the genre: ruminations on humanity, the future, the impact of technology in our lives, armageddon, love, family, and more. With an achingly simple premise and an even simpler animation style — stick figures on a digital background — it conveys a message that is more powerful than almost every other film from 2015. It opens on a little girl, Emily, who runs towards a ringing communicator. On screen is a clone of Emily, speaking to her from 227 years in the future — she wants to use time-travel to bring Emily to meet her. What follows is an amusing, dark, sad, uplifting, horrifying, intelligent monologue of sorts on the human condition, as clone Emily tells young Emily about the world she inhabits.

Cloning is an accepted way to extend one’s life, with an adult being impregnated with their clone and then passing their memories on. But it’s only for the wealthy — the poor can opt to have their face preserved and stretched across a crude robot to keep family members company. Time travel exists, used for looking at past events and traveling to past eras, but it’s dangerous — unless precisely calculated, humans can be transported into space, into the ground, or hundreds of thousands of years into the past. The internet has transformed into the “Outernet,” a neural network existing in our physical world, with people lost to its excesses never to be seen again. As clone Emily walks through her memories of life with young Emily, she speaks in an almost robotic monotone of love, loneliness, emotional immaturity, family, her desires, her dreams, her memories, her very existence as a person.

What makes Hertzfeldt’s films so effective is that, as clone Emily narrates horrible, terrible situations that humanity has managed to cause — a clone is born without a brain and installed, in a stasis tube, to grow old and die in a museum as an art exhibit — young Emily couldn’t care less. She giddily comments on insignificant things, lost to wonderment as she changes the color of the Outranet by shouting “Green! Blue! Brown! … I don’t know any more colors.” After clone Emily reveals that Earth will soon be destroyed by an asteroid and the lower classes have used discount time travel to try and escape, resulting in millions being transported into orbit above earth, young Emily looks up to see their burning bodies falling as shooting stars. “I’ll count them!” she giggles. It’s one of countless scenes in World of Tomorrow that contrast the horror of this dystopian future with the childlike wonder of young Emily — these technologies are fascinating and fantastic to a child, but to adult viewers of the film they’re monstrous. That World of Tomorrow can convey so much weight and have so much pathos while also being darkly funny is testament to Hertzfeldt’s script. If he doesn’t take home the Oscar on February 28, there’s something seriously wrong with the Academy, as no other film here can come close to matching the excellence of what has been produced here.

) features five additional films that were not nominated for an Oscar and were not reviewed here. Check back next week for a rundown of the Best Live Action Short Films.

The Academy Awards will take place on February 28. They will air on ABC and stream live on Oscar.com.