From Millennium to Mixtape, Grace Jones to Lady Gaga, the 9:30 Club has long had gay appeal

By Doug Rule on January 7, 2016 @https://twitter.com/ruleonwriting 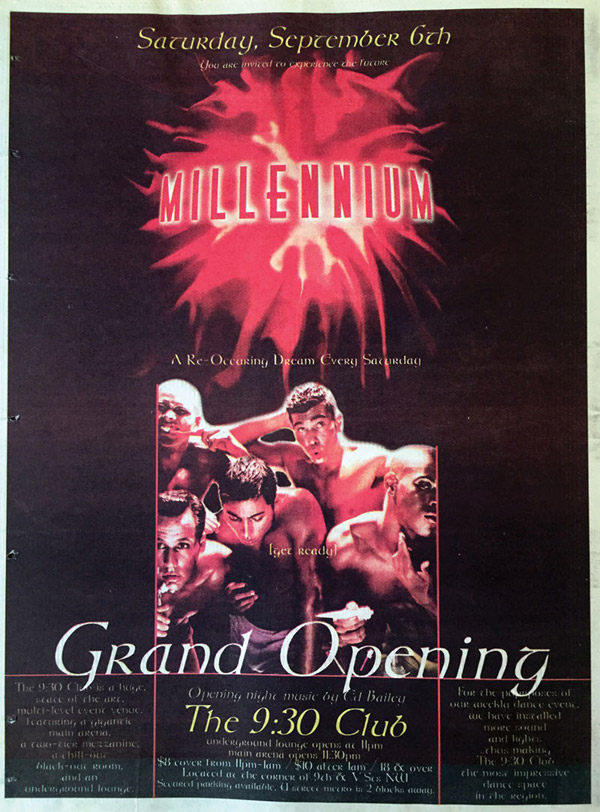 “Who’s that drag queen?” inquired a friend of Bob Mould’s. It was 2009 and Mould was in the midst of Blowoff, his monthly dance party at the 9:30 Club. The queen in question? Lady Gaga, in town for the National Equality March.

“Gaga did her best Eva Peron imitation, waving down at our crowded dance floor,” Mould recalls. And that was it: Gaga waving for a few seconds from a VIP booth, immediately after Rich Morel, Mould’s cohort in Blowoff, debuted her brand-new single “Bad Romance” — a recording of which Gaga’s handlers had given to him mere minutes beforehand. She didn’t perform, and her appearance came brief and early, within the first hour of the party. Which is why most patrons didn’t see it or weren’t quite sure to believe it even happened. 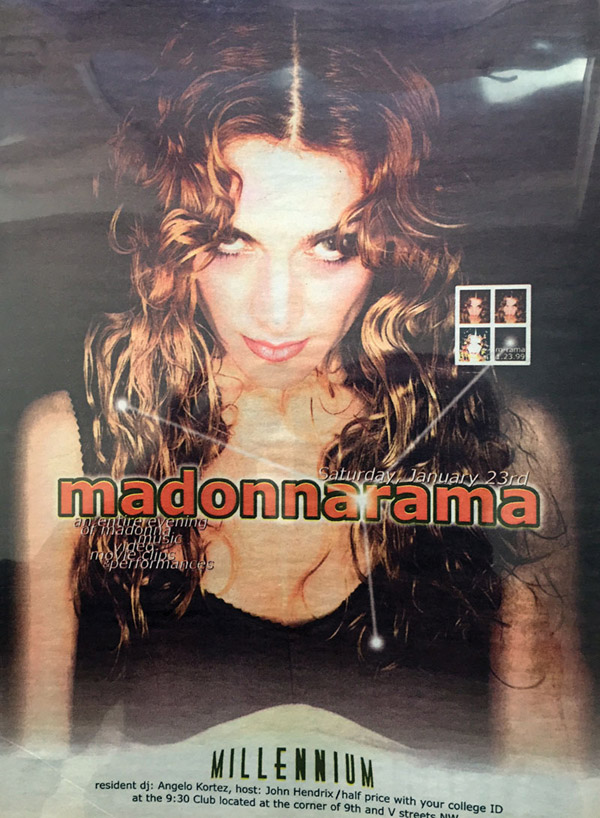 The 9:30 Club has become known as a source of unbelievable, or at least unexpected, surprises. Blowoff, launched as a small, simple bar night in 2003, itself became a 9:30 surprise: Within two years it had morphed into a monthly, mainstage dance party for the bear community, put together by Morel and Mould — the seminal punk rock singer and guitarist turned DJ. The party’s runaway success at 9:30 motivated the pair to take it on the road. “The 9:30 Club was the best venue in the world for what we were doing,” Mould says. “Large projections, DJ setup on the dance floor, banners hanging from the balcony –- and we emulated that production setup in many other concert halls around North America.”

Related: An interview with the 9:30 Club’s Seth Hurwitz

“The 9:30 Club remains my favorite club to play in the country,” Morel adds, citing Hurwitz and his staff for “being so receptive to what we were doing and to our crowd.”

The 9:30 Club has long appealed to the gay community simply through routine booking of performers with gay appeal or cachet, from Henry Rollins to Book of Love to Ani DiFranco. And anyone who’s caught a show by Nona Hendrix, Tegan and Sara, Years and Years, Erasure or the Scissor Sisters knows that openly LGBT artists often draw a gay crowd to match.

Since its move to 815 V Street twenty years ago, 9:30 has regularly opened its doors to promoters of gay late-night dance parties, including the annual spring circuit event Cherry and Mid-Atlantic Leather Weekend, which frequently closes out its large leather festival with a dance party at the club, including next Sunday, Jan. 17, where house DJ Ultra Nate will turn it out. “We know how fortunate we are to have 9:30 Club, with its crew and its sound,” the party’s organizer Danny Linden says. “It’s a national monument that none of us take for granted.” 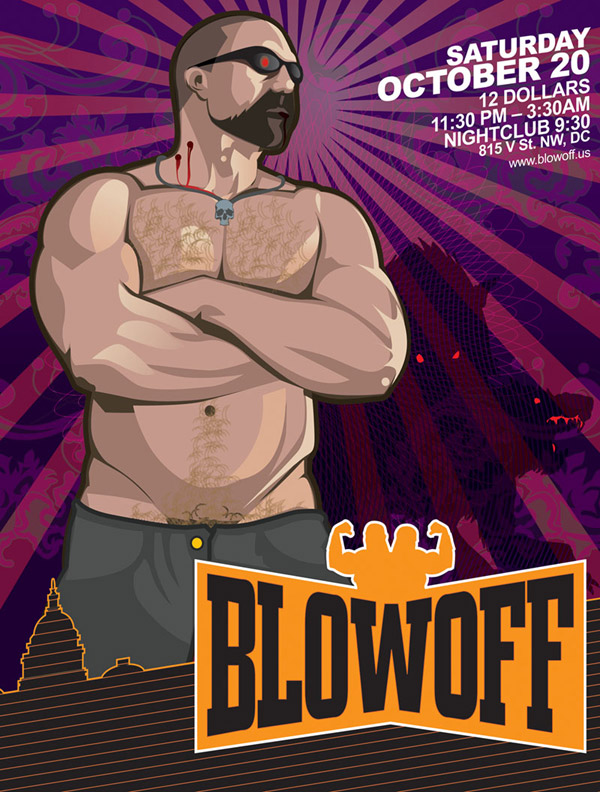 A week before Mould and Morel’s Blowoff party ended its 11-year-run at 9:30 in 2014, Matt Bailer and Shea Van Horn’s Mixtape debuted in the space. The roaming “straight-friendly” DJ party has now touched down at 9:30 seven times, and will celebrate its 8th anniversary there next September.

But at least for Van Horn, the first time will always be the best. On that very night, Jan. 11, 2014, during a break in the dressing room that the club had furnished with its usual rock star accoutrements — the famous 9:30 Club cupcakes, beer, pita and hummus — Van Horn’s now-husband proposed to him. Bailer was the first person Van Horn told, just before going on for his next set. “It was fun looking out in the crowd and watching Andy slowly tell people,” Van Horn says. “They would stop and look and point. It was sweet. And I was just so giddy.” 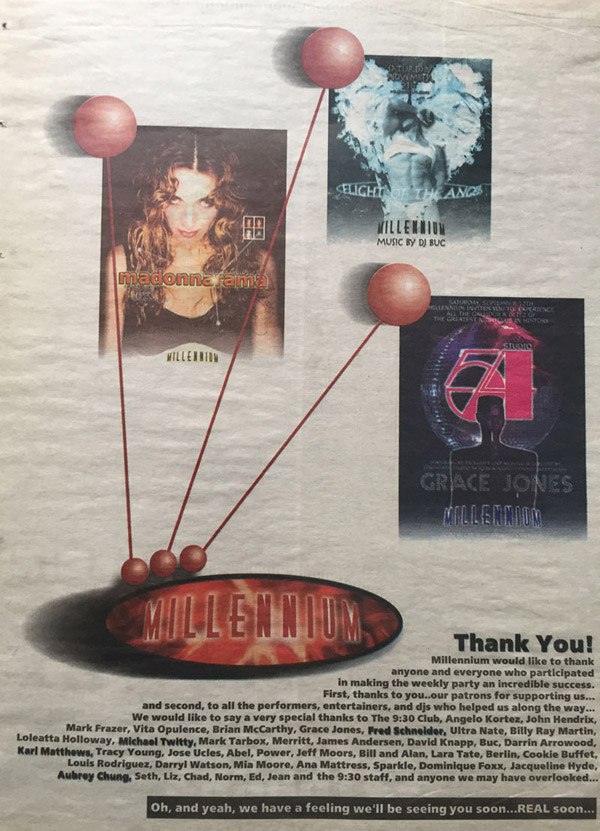 But Town Danceboutique’s Ed Bailey was the first to take the concept of having a gay dance party in the new 9:30 Club — and he ran with it. Working with John Guggenmos, his longtime business partner, Bailey would set up the Millennium party as quickly as possible — generally right after a concert earlier that evening — every Saturday night for two years. Although there were other highlights in his stint there, from his first, full-scale Madonnarama party, timed to coincide with the diva’s blockbuster album Ray of Light, to DJ’ing a party with Fred Schneider of the B-52s, it was the Grace Jones experience that really takes the cake. Or make that, the Cristal. “She wouldn’t go on until she had a bottle of Cristal,” Bailey says. Problem was, the 9:30 Club didn’t have any of the champagne. So Jones, scheduled to perform as part of a disco-themed party tied to release of the Miramax film 54, waited in her dressing room while Guggenmos located a bottle. Even then, nearly two hours later than the scheduled midnight performance, Jones wasn’t quite ready, performing her first number from her dressing room.

Getting Jones to perform was a minor coup in itself, which Bailey says is all credit to Hurwitz and the 9:30 Club. Was the extra effort to get her to perform worth it? “Her show was unbelievable,” Bailey says. “It was one of the greatest that I have ever gotten to be a part of.”

Doug Rule covers the arts, theater, music, food, nightlife and culture as contributing editor for Metro Weekly.
← Previous Story 2016: The Year Ahead
Next Story → Club Life: An interview with the 9:30 Club’s Seth Hurwitz