By Doug Rule on February 4, 2016 @ruleonwriting

Fresh out of college, Thomas W. Jones II thought about becoming a comedian. “I really got into performance that was really engaging an audience,” he says. “You know, where it was just the performer and the audience.”

Jones quickly realized stand-up wasn’t the performance art for him.

“I tried that once and said, ‘I’m going to leave that to the professionals. I’m going to go into the theater where people aren’t drunk and heckling at two in the morning.'”

So into the theater Jones went, as an occasional performer but mostly as a writer, director and choreographer, with music-steeped shows generally with some larger thematic import. As a child of the Black Arts Movement (mentored by one of the movement’s pioneers, Sonia Sanchez), the New York native says, “I always saw a kind of kinetic connection between social and political issues and the role of the theater in advancing that.”

Jones has long been a familiar presence in Washington theater, having won six Helen Hayes Awards with one of his very first shows, 1995’s Bessie’s Blues, written with composer Keith Rawls, and presented by the Studio Theatre. Over the past 15 years, Jones has become closely associated with Alexandria’s MetroStage, which revived Bessie’s Blues last year. As the 32-year-old company’s most frequent collaborator, Jones helms at least one show a season, usually focused on retelling and relating the life and times of an influential African-American artist, everyone from Bessie Smith to Langston Hughes to Sammy Davis Jr.

Jones never lost his comedic sensibility, which shows up in the way he describes his work. “I developed this thing of wanting to do doggie-bag theater,” he says. “You want to take some of this home with you.” 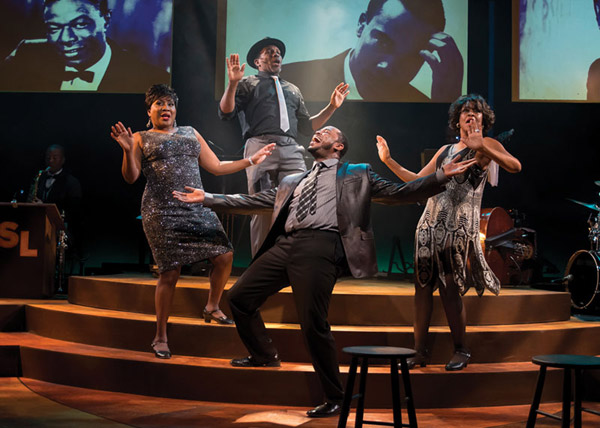 Certainly Carolyn Griffin has taken his work home, as well as to heart. “I think Tom is one of the finest lyricists out there, bar none,” says Griffin, producing artistic director of MetroStage. “What he writes as a lyricist is pure poetry…. There’s a rhythm and a lyricism to his writing, even a lot of his dialogue, that I really respond to.”

Jones and Griffin began working together just before MetroStage — founded in 1984 as the American Showcase Theatre Company — opened in its current 130-seat location in 2001, in a retrofitted lumber warehouse near the Alexandria waterfront. What started as a couple of readings of his musical works has blossomed into “a home, and a place where I get to work with friends, amazing artists who don’t always get a chance to be out there,” says Jones. This “family of artists” includes composers William Hubbard and William Knowles, as well as tap legend Maurice Hines and actress Roz White. “We all kind of migrated here,” he says. “We kind of nested here creatively.”

This nesting of talent has resulted in what Griffin refers to as “many shows about groundbreaking African-American musical icons,” from Cool Papa’s Party to Three Sistahs, from Pearl Bailey…by request to Ladies Swing the Blues, the shows.

To celebrate her association with Jones, Griffin asked him to develop a new show that synthesized his work for MetroStage. The resulting production, Shake Loose: An Evening of Moods, Blues & Icons, is more than a musical revue.

“It’s not a jukebox musical,” she says. “These are songs and scenes that take you from start to finish through the 20th Century. It covers everything — all the stories, all the eras, all the decades, all the events that were iconic events in our lives in the 20th Century — through the prism of African-American artists.” Four singers — longtime Jones collaborator White, Lori Williams, Anthony Manough and Rayshun Lamarr — perform the evening’s 37 songs with accompaniment by a five-piece band led by Knowles. Anybody who has been to a MetroStage musical over the years will no doubt recognize at least a couple of these songs — which may sound like jazz, blues or R&B standards, but in fact are all original compositions.

Shake Loose doesn’t explicitly touch on LGBT themes, though it does include a couple of songs from Two Queens, One Castle, a 2006 musical Jones co-wrote with Jevetta Steele exploring the phenomenon of “down low” — outwardly straight African-American men who are married to women but secretly having sex with men on the side.

Jones, who is straight, continues to explore LGBT topics and is currently developing a play about Sir Lady Java, a Los Angeles cabaret artist and early transgender activist. “Java was allegedly a mistress of Redd Foxx and Sammy Davis Jr.,” says Jones. She succeeded in challenging, all the way to the state Supreme Court, a local ordinance that made it illegal to dress against one’s gender.

At the heart of all of Jones’s work is the principle of “living your life authentically…. I think the idea of trying to live your life unapologetically is what underscores all of it.”

All signs point to more Jones-helmed productions at MetroStage. Says Griffin, “I like the way he writes, I like the stories he tells, and certainly I like what comes out of his collaborations with William Knowles and William Hubbard.”

For Jones’s part, he says MetroStage is a space where “we’re able to do the kind of work that not only is where our strengths are, but also stretches us. Carolyn lets us play. And that’s always a good thing.”