Simon Le Bon on The Paper Gods Tour, the DNA of Duran Duran, and how the iconic band has stayed together for 40 years 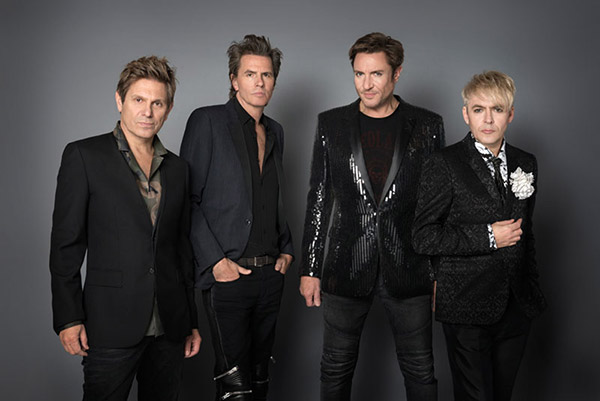 METRO WEEKLY: How’s the break been since the first leg of the tour?

SIMON LE BON: It’s been a lot of fun. I got pretty sick with a nasty head cold, though. I’ve been eating lots of pickled onions. It’s very good for the voice. Pickled onions and Tabasco.

MW: You’re about to embark on the second leg of the tour. Are you excited for it?

LE BON: We’ve actually got a third leg, and I believe a fourth leg. Well, I don’t know about a fourth leg — definitely got a third leg coming up. This is a really exciting bit now, because we’ve developed the show significantly. We’ve got a much more comprehensive production. More songs, longer show.

MW: Your new album, Paper Gods, has a lot of guest vocalists on it. How do you handle that when you’re playing it live? Do you choose songs that don’t have the additional vocals?

LE BON: You can’t replace Janelle Monáe or Kiesza. You’ve just got to do your best, so the girls that sing those parts do them in their own way. On occasion we have thought about filming people, but it makes it less live, of course. I’d love to get the Lindsey Lohan bit. That would be quite cool if that was coming over in a film.

MW: If you projected that in the background…

LE BON: Maybe we will. Maybe we’ll do that when we get to New York. The thing about shows is that you’re always updating and developing them. They never stop. When they stop developing, you look at the tour and think to yourself, “Do I really want to carry on doing this?”

MW: Can we expect a different set list from the last leg?

LE BON: We were building the skeleton of it when we came out the last time. So we’ll be putting some new songs in, some different ones, obviously. People are more used to the new album, so we’re able to put more material from the new album into the show. We’ve got this kind of electro-ending now, which is quite tasty.

MW: From the pictures I’ve seen of the production, it looks pretty intense with the video screen backdrops.

LE BON: Yes, the videos are not just behind us — they kind of wrap around us as well. So it’s almost like at times we’re in the video.

MW: Speaking of videos, you made one for “Pressure Off.” Are you making ones for other songs? Are there going to be more singles from the album coming this year?

LE BON: That is the plan.

MW: Everybody would love a Nile Rodgers remix of “Pressure Off,” you know.

LE BON: Me? I’d really like to get “Last Night in the City” away as a single. I think that’s a really good one. And possibly “Paper Gods.” There’s a lot of feeling in that song. But, obviously, in its current state it’s not particularly radio friendly, just in terms of its length. And although I’d love to hear it on the radio, and would love to hear as a single, I’m loathe — we all are a bit loathe — to cut it up and mutilate it. We’re trying to figure out another way of doing it.

LE BON: There comes a point where you’ve got to expect yourself to be able to do it, to remember your parts and everything. If the show hasn’t changed significantly in terms of material, you don’t want to have to spend a couple of months rehearsing it. You want to be able to just kind of do three or four days warming up, get your energy levels back up and get it out there. It’s a repertoire kind of thing.

“The whole process of listening to music has become so much more internalized and personalized. I think it started with the Sony Walkman. That was the real watershed.”

MW: You had a tremendous response from the first leg of the tour and got some of the best reviews you guys have ever had as far as concerts. Is it nice to get those kinds of accolades?

LE BON: We’ve been the kind of band who has always divided opinion, and it’s always been an extreme kind of reaction. We’re not a band that people say, “Oh, I like them.” They say, “I love them” or “I hate them.” And so we’ve grown up with quite a lot of criticism, some of it constructive, some of it not. And one of the things you do is you start to not take any notice of it. So I would say “Yes, it’s nice that we got nice reviews,” but I don’t really read reviews. It’s no huge deal to me because what I feel when I walk out on stage, what we feel from the audience, means so much more than what people write about us. We can tell whether we’re playing a good show or not because the crowd tells us right there and then. Sometimes you just have to not give a fuck about what people think about you. You just get on with it.

MW: One thing I’ve always loved about Duran Duran is that every album is like a new art project, a new adventure for you guys. You go in with nothing and just bang out something amazing.

LE BON: That’s what makes it fun for us. That’s the best way to do it. We don’t have a template. We don’t have any formula to adhere to. We want to make music that’s exciting.

MW: I’ve noticed with Paper Gods that there are a lot of songs on that album that reference previous albums. “Butterfly Girl” sounded like it could be on Notorious. “Only in Dreams” could be on Liberty.

LE BON: Oh, really. Now that surprises me, that does.

MW: “What Are the Chances” and “You Kill Me With Silence” could have been on Medazzaland, with those guitar parts and that mood. This album seems like you are subconsciously paying homage to all the previous albums you’ve done and making them new.

LE BON: There are two ways of looking at that. One is that we look back and do that. The other way of looking at it is that that stuff is just inside us and that is the kind of music that we like and will continue to reference. Go back to things that inspired those songs, the songs that were on Liberty, the songs that were on Medazzaland. Those inspire us to do the things the way we do them.

LE BON: Yes, I think so. I think much more so than particular references. We know there are in-jokes and things, none of which I can remember right now. You know, in “You Kill Me With Silence, there’s the line “drive another lad insane.”

MW: That was reference to David Bowie, right?

MW: The music industry has changed over the years, what with new ways of listening to music, like streaming. There’s no physical product anymore. How do you feel about that?

LE BON: I’m not a nostalgist, but I like physical product. I like going to a record shop and to be out in public and rub shoulders with people who are perhaps interested in the same music as you are, because you’re on the same kind of rack looking at the albums and things. It’s a great place to spot girls who you can follow home. [Laughs.] And that’s all gone. The whole process of listening to music has become so much more internalized and personalized. I think it started with the Sony Walkman. That was the real watershed.

I grew up listening to music — I put The Rolling Stones Let It Bleed on the hi-fi — on the “steeereo,” as my mother used to call it — and open the windows so that the whole fucking street could hear what I was playing. And then it suddenly became only you. Like a lot of things, people are becoming compartmentalized. People are becoming slightly alienated from each other. So I spend as much time as I can walking around and actually living a real life in a real world, not in a digital world.

There are great things about the Internet. You can access anything you want like that. You don’t have to jump through the hoops that you used to have to do to find the thing that you heard on the radio. It’s much easier. You’ve got bloody Shazam, for God’s sake. It’s made it easier — and the music is still good. I just know people don’t appreciate music in the same way if they didn’t have to walk three miles to get it.

“People will do anything they can to get music for nothing. Then they’ll spend hundreds of dollars on a live show because they value the event — the ephemeral moment — so much more.”

MW: True. Everything’s at your fingertips.

LE BON: And if you don’t have to pay for it — if you don’t have to pay for recordings — it’s devalued. It’s extraordinary that people won’t spend the price of a packet of cigarettes on an album. They do anything they can to get it for nothing. Then they’ll spend hundreds and hundreds of dollars on tickets for a live show because they value the event — the ephemeral moment, that thing that cannot be recorded — so much more.

MW: Final question. After nearly 40 years, what is it that keeps you and Duran Duran going?

LE BON: Oh, there’s been all sorts of things. Music is the first. We make great music together. Friendship. We love to go around with each other. Ego. We’re proud of the band. We want it to continue. We like earning money as well. It’s good fun. And I like the fact that we contribute something. You know, you go around the world, but you’re not going as a tourist. You’re going and you’re working and I’m proud of that. When people ask me “What are you doing here? Are you on vacation?” I go, “No, I’m working.” I’m proud of that. It’s a nice thing to be able to say, “I’m contributing.”