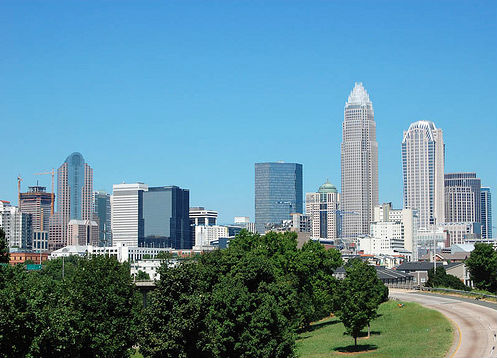 Skyline of the city of Charlotte, N.C. (Photo: Bz3rk, via Wikimedia Commons).

The backlash from businesses is continuing in North Carolina. More than 90 CEOs and executives of major corporations have signed onto an open letter calling upon Gov. Pat McCrory (R) and Republican lawmakers to reverse an anti-LGBT bill passed last week.

In their letter, circulated by the Human Rights Campaign and Equality North Carolina, the executives ask for a reversal of the anti-gay bill, known as HB 2. Signatories to the letter include American Airlines, Bank of American, Biogen, Dow Chemical, Red Hat, Wells Fargo, Apple, Marriott, Lowes, Facebook, and Google, just to name a few.

The bill in question reverses a pro-LGBT ordinance passed in Charlotte last month, that provides protections in employment, housing and public accommodations on the basis of sexual orientation and gender identity, as well as other protected classes of people. But it goes even farther, taking away the ability of any municipality to pass any ordinance whose subject matter has not already been approved by the General Assembly, and mandating that transgender people use only the bathroom corresponding to their biological sex at birth when using facilities in government buildings, including schools.

On Thursday morning, Chad Griffin, the president of HRC, and Chris Sgro, the executive director of Equality NC, plan to deliver the letter personally to McCrory’s office. They have also requested a personal meeting to talk with the governor about the impact that HB 2 will have on the state.

“Put simply, HB 2 is not a bill that reflects the values of our companies, of our country, or even the overwhelming majority of North Carolinians,” the letter to McCrory reads. “We are disappointed in your decision to sign this discriminatory legislation into law.

“The business community, by and large, has consistently communicated to lawmakers at every level that such laws are bad for our employees and bad for business,” the letter continues. “This is not a direction in which states move when they are seeking to provide successful, thriving hubs for business and economic development. We believe that HB 2 will make it far more challenging for businesses across the state to recruit and retain the nation’s best and brightest workers and attract the most talented students from across the country. It will also diminish the state’s draw as a destination for tourism, new businesses, and economic activity.”

The business community has found itself particularly active in opposing a slew of more than 200 anti-LGBT bills being pushed through various legislatures throughout the nation. Similar pressures and threats of reduced economic opportunities have led Republican and Democratic governors in South Dakota, Virginia and Georgia to veto anti-LGBT legislation in recent weeks. Some states and other major cities have already promised to ban all non-essential official state travel to North Carolina until the law is either reversed or amended.

“North Carolina’s place as a business leader in the South is based on fairness, inclusion, and diversity,” Sgro said in a statement. “HB 2 does not represent North Carolina values, and it weakens our competitive edge. We are glad to see our business community in the Old North State standing up against discriminatory measures like this. Governor McCrory made a mess of our state last week, and our businesses are leading the charge to repair our state to a place of fairness.”