Home / News + Politics / Nation / For one D.C. family, accepting their young transgender daughter was a non-issue

For one D.C. family, accepting their young transgender daughter was a non-issue

By Fallon Forbush on March 31, 2016 @FallonWForbush 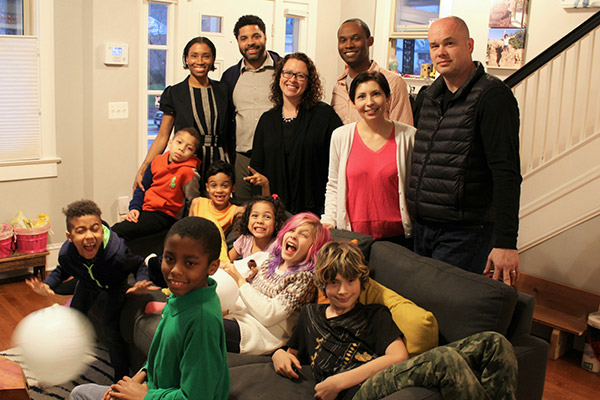 Ronnie and Ellie Ford (second and third from left, couch) and Vanessa and J.R. Ford (center, standing) with the two other families – Photo: Fallon Forbush

Children have been rolling dyed, hard-boiled eggs on the South Lawn of the White House for more than 100 years. It’s an honor that this week Ellie Ford, Penelope Ghartey, Avery Jackson, and their families were invited to participate in. Not because they were lucky and scored tickets through the lottery, but because Ellie, Penelope and Avery all share one thing in common: they identify as transgender.

Barack Obama is the first president to provide tickets for the Easter Egg Roll to LGBT organizations, and the first to welcome transgender children to join in the celebration. So it was no surprise when the Obamas continued their legacy of inclusion for their final egg roll, by providing tickets to the three families.

Before Monday’s fun with the First Family, the families gathered on Easter Sunday in the home of Vanessa and J.R. Ford, parents of 5-year-old Ellie and her 6-year-old brother, Ronnie. Vanessa is all too aware of the importance of the following day, which she feels is a civic duty for transgender youth.

“Every time we’re out and proud is a form of advocacy,” she says. “I cannot at all speak about the experience about being a transgender person, but I can speak about what it’s like to be the parent of a kid who at four tells you they’re a different gender, and listening to them and what that journey is like. And if that means that somebody else listens to their kid, then that is a platform that we can use.”

It’s been a year since her daughter’s social transition from Zachary to Ellie. “For me as a parent, it was shock, but it put everything else into perspective,” she says.

The Fords allow their kids to express themselves however they desire. When Ronnie was younger, he would play dress up in princess dresses. He eventually grew out of it, but it became an everyday occurrence for Ellie. On her fourth birthday, in the middle of a party, she told her parents that she was a girl.

“I said, ‘You’re my favorite princess boy,'” her mother recalls. “She stopped and said, ‘Mom, I’m a girl.’ From that moment she told us, it took us a little while — it didn’t even occur that we could have a daughter. We thought we just had a son who liked dresses.”

If the free-spirited Fords had any limits, it was with their daughter’s new name. Ellie originally wanted to be Cinderella, her first pick of Disney princesses. Instead, they compromised on Ellie, after a beloved plush elephant given to her when she was a year old. “She owned it immediately,” says Ford. “It was her name and she never looked back.”

“It’s nice to see her blossom and be this amazing person, whereas before she was quiet and more withdrawn — and now she’s not that at all.”

With the transition, Ellie claimed a confidence that was lacking in her identity as Zachary. As an elementary school teacher in Northeast D.C., Vanessa Ford knows a lot of people in the community, and a lot of people know her family. “They watched her progression,” she says. “She was with us everywhere and would always hide in the corner or something.”

The first time Ellie started dressing publicly as a girl, she jumped up and down in front of a PTA meeting. She was so overcome with joy, she ended up throwing up everywhere. “It was the first time she was out in public dressed in a way that matched her,” Ford says. “It’s nice to see her blossom and be this amazing person, whereas before she was quiet and more withdrawn — and now she’s not that at all.”

D.C.’s public schools and the charter school that Ellie attends have strong policies to protect transgender and gender nonconforming students, which made her transition relatively stress-free. Much like the process for changing Ellie’s name and gender marker with the District’s Office of the State Superintendent of Education. “All they needed was email confirmation from us. They didn’t give us any push back. We didn’t need any legal documentation.”

With accepting parents and favorable policies in place, Ellie is oblivious to a lot of the struggles that the transgender community has experienced. Her early transition in a more accepting society is the reason she and many other transgender children are being studied in the University of Washington’s TransYouth Project. It’s the first study of its kind in the country, aimed at tracking the first generation of transgender youth.

“I think she’s going to be okay,” her mother says, beaming. “We’re lucky to live in D.C. and have the structural supports in place. And I’m lucky to have a husband to jump on it faster than I did, even. That’s our story.”