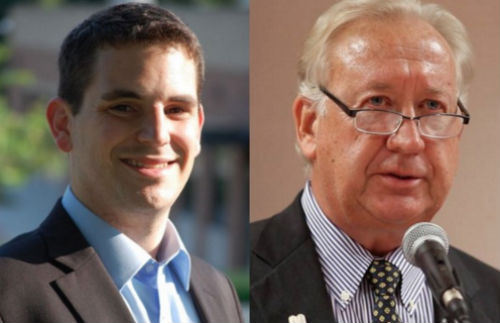 Prosecutor Emmet Davitt announced his office was charging Republican consultants Dennis Fusaro, 55, of Stephens City, Va., and Stephen Waters, 51, of Greensboro, N.C., with two counts each, one for violating and another for conspiring to violate the “authority line” requirements of Maryland’s election laws, meaning the requirement to disclose which group or individual is pushing a particular political message.

The robocalls were directed to about 5,000 Anne Arundel County residents the weekend before the 2014 election against Patrick Armstrong, the Democrat running for the District 5 seat on the Anne Arundel County Council. The text of the robocall congratulated Armstrong for coming out of the closet and attempted to link him to Maryland’s 2014 law prohibiting discrimination against people based on their gender identity,  which had only passed a few months earlier. The call also played up fears — based on talking points utilized by LGBT opponents — that the new law would put people, particularly women and young girls, at risk if transgender people were allowed to use the restroom that best corresponds to their gender identity.

The script of the robocall was as follows:

“Hello, what a great opportunity for the LGBT community. We have a true believe for our cause in Patrick Armstrong, who’s running for County Council in Anne Arundel County, Maryland. Call Patrick today and thank him for his bravery in coming oiut of the closet. Coming out of the closet and supporting the Fairness for All Marylanders Act, the Maryland State Senate Bill 212, and supporting the rights for all transgenders. Transgenders can now openly and freely go into any bathroom of their choice based on their confused gender identity. Tell Patrick to continue to stand loud and proud in support for transgenders’ equal rights. While our opponent argued that children could be at risk by sexual predators with this new law, we celebrate the rights of transgenders and what this does for equality for transgenders in Maryland. Call him today and thank him for supporting the bathroom bill. Paid for and authorized by Marylanders for  Transgenders.”

The recording then gave the home number of Armstrong’s mother and invited residents to call about Armstrong’s support for the “bathroom bill.” As a result, his mother received many harassing phone calls from anti-LGBT opponents.

“The call in question failed to identify Fusaro and Waters as the persons responsible for the call, and failed to state whether it was authorized by any candidate,” Davitt wrote in the complaint against Fusaro and Waters. “Instead the call falsely stated that it was ‘Paid for and authorized by Marylanders for Transgenders’ and displayed the telephone number on an ‘untraceable’ prepaid cell phone that was purchased for cash by Waters and Fusaro at a Walmart in Fredericksburg, Virginia, in an effort to conceal their identities as the persons authorizing and paying for the call.

“Maryland voters are entitled to know what person or group is responsible for such material, particularly when it is published and distributed just a few days before Election Day,” the complaint continues. “The credibility of the messenger is an essential factor in evaluating the value of the message.”

The complaint also acknowledges that, at the time, Fusaro was working as the campaign manager for Armstrong’s opponent, Michael Anthony Peroutka, a social conservative best known for his ties to the League of the South, an anti-gay secessionist group. Peroutka went on to win the general election, something that Armstrong attributes to the robocall for revealing details about his personal life and playing on people’s fears about the impact of the nondiscrimination law.

So far, no trial date has been set for Fusaro or Waters, but a preliminary hearing has been scheduled for May 13. If convicted, each separate charge could carry a prison sentence of up to one year in jail and a $5,000 fine.

A legislative aide released a statement to the Sun stating that Peroutka had “no prior knowledge of the robocall” and has “fully cooperated with authorities” who are investigating the case.